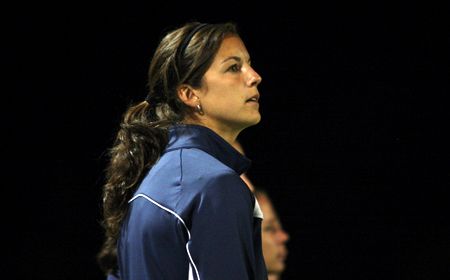 “I am very excited to be working with this talented and dedicated team, while also having the opportunity to work alongside Coach Marovich as the program continues to grow and develop,” Hathorn said.  “I look forward to helping this team as they continue to strive for excellence on the soccer field, in the classroom and in the community.”

In 2009, Hathorn was an assistant coach at Regis University in Colorado where she helped the program maintain a top-25 national ranking in Division II.

Hathorn currently is also a consultant for the Canadian Soccer Association National Teams and has worked as a video coach and technician since February, 2009.  Most recently, she has spent time with the U-17 Canadian National Team during World Cup qualifying in Costa Rica.  She will be with the team in Trinadad for the U-17 World Cup.

She spent three seasons as an assistant coach at Northern Arizona University prior to her arrival at Regis, working with all aspects of the program including recruiting, team management, and working with Lumberjack defenders throughout the season.  In 2008, Hathorn was instrumental in helping Northern Arizona win its first Big Sky Conference championship in program history and earn an automatic bid to the NCAA Women’s College Cup.

Hathorn played collegiately at the University of Maine, where she earned National Soccer Coaches Association of America (NSCAA) All-Northeast Region Second Team honors as a senior defender.  She was named the 2002 and 2005 America East Defender of the Year, and a three-time First Team All-America East selection.  Named to the America East All-Rookie Team as a freshman, she was a four-time conference All-Academic Team selection in addition to an ESPN The Magazine/CoSIDA Academic All-District First Team pick as a senior.

She also offers a great deal of high level playing experience, having seen action with the Canadian World Cup team in three games in 2003 and also played for Canada’s Pan American Team which competed in the Dominican Republic.  She also spent four seasons with the W-League’s Ottawa Fury, and was twice an All-Eastern Conference defender.

“It became very clear during Linda's time on campus that her personality, passion and desire to improve the players she works with would be a terrific complement to mine,” Marovich said.  “Her experience as an assistant coach at Northern Arizona, playing both collegiately and with Canadian National Team will be a tremendous asset to our program.  I am excited she will be joining the Valpo family and Linda will be a fine role model for our student athletes.”

Hathorn, a native of Beaconsfield, Quebec, earned her bachelor’s degree in kinesiology and physical education from Maine in 2005.  She earned her NSCAA advanced national coaching license in 2008 and has earned her USSF national “B” license.