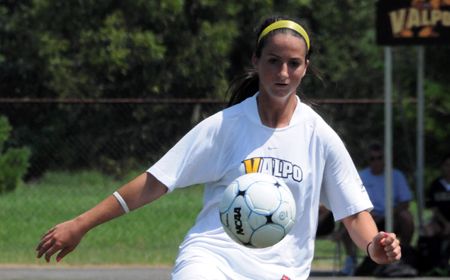 This Week in Crusader Soccer: Valparaiso wraps up its three-match homestand this weekend with a pair of contests.  The Crusaders will entertain Eastern Michigan on Friday evening under the lights at Brown Field before hosting IUPUI on Sunday out at Eastgate Field.

Head Coach John Marovich: John Marovich holds a 24-15-6 record both overall and with Valpo in his third season at the helm of the Brown and Gold.  Just the third head coach in program history, Marovich has the best winning percentage (.600) ever at Valpo, and ranks second in total victories.

Series Notes: Eastern Michigan holds a 4-1 advantage all-time in the series with the Crusaders, but the two schools have not met since Sept. 12, 1999, when the Eagles posted a 3-1 victory in the Chippewa Fall Classic hosted by Central Michigan.  Valpo’s only win in the series came in 1995.  The Crusaders lead the series with IUPUI 8-3-1 going back to 1998.  Valpo has won five straight meetings, including a 1-0 triumph last season in Indianapolis, Ind.

Wrapping Up Last Week’s Action: Valpo scored four times in less than 25 minutes on Friday, including Luisa Desario’s match-winner, as the Crusaders defeated IPFW 4-2 in Fort Wayne, Ind.  Sunday against Eastern Kentucky, the two schools battled for 110 minutes before settling for a 0-0 draw.  Kristen Manski made three saves for her second shutout of the season.

Scouting Eastern Michigan: The Eagles enter Friday’s match at Valpo having dropped two straight, including a 1-0 overtime setback on Tuesday evening against Detroit in their home opener.  Eastern Michigan has tallied just three goals on the year, with Stephanie Janssens registering a goal and an assist.  Between the posts Monique Budani has played every minute, notching a 1.12 goals against average and two shutouts.

Scouting IUPUI: The Jaguars enter the weekend coming off of a 4-0 shutout loss at Nebraska last Sunday.  IUPUI hosts Western Michigan on Friday before heading to Valpo on Sunday.  Megan Hock has scored two of the team’s three goals this season, including the match-winner against South Dakota.  Three different goalkeepers have seen time already this season for the Jaguars.  IUPUI has been shutout in four of its first five matches.

Let’s Go Racing: The No. 99 Aflac Ford Fusion show car will be on hand for the NASCAR fans in attendance at Friday evening’s match against Eastern Michigan.  Fans can take photos and ask questions with members of the Roush Fenway Racing staff that will be on-site.

An Offensive Explosion: Valparaiso’s explosion of four goals on Friday at IPFW turned out to be the most goals scored by the Brown and Gold in a match since the Crusaders scored four on Sept. 7, 2007, also against IPFW.  Valpo has not scored five times in a contest since a 5-1 win against Lewis on Oct. 8, 2006.

Pedersen Scores First Goal at Valpo: After sitting out all of last season with an injury after transferring to Valpo from Binghamton, Casey Pedersen has finally seen the field this year.  The redshirt-junior scored her first goal as a member of the Brown and Gold on Friday at IPFW.

Balanced Scoring Attack: Valparaiso has scored nine times through the first five matches of the season, with eight different players contributing tallies.  Only Luisa Desario has scored more than once, and both of her goals have resulted in match-winners for the Crusaders.

Best Start in School History: Valparaiso has never remained unbeaten through five matches until this season, and enter this weekend 3-0-2.  In fact, Valpo’s previous best five match start was 4-1 in 2008, a year the Crusaders ended up 7-1-1 through nine matches.

On the Shutout Charts: Freshman netminder Kristen Manski has already registered two shutouts this year, and is tied for ninth on the single season charts.  In fact, her two clean sheets also rank her seventh on the career lists.

She Shoots, She Scores: Luisa Desario leads the Horizon League with 26 shot attempts already this season.  The sophomore now has fired off 87 total shots since arriving on campus last season, and ranks 10th on the career charts at Valpo.  Desario has eight career goals, tied with Rachel Hoaglin as Valpo’s active scoring leader.

Crusaders Picked Third in Preseason Poll: The head coaches selected Valparaiso to finish third in the Horizon League this season according to the preseason poll.  The Crusaders finished third in the regular season a year ago before advancing to the tournament championship match.

This and That: Valpo is 4-1 all-time playing at Brown Field ... the Crusaders’ 0-0 draw at IPFW was the first scoreless tie for Valpo since Oct. 29, 2009 against Youngstown State in the Horizon League Tournament, with the Penguins eventually advancing on penalty kicks.