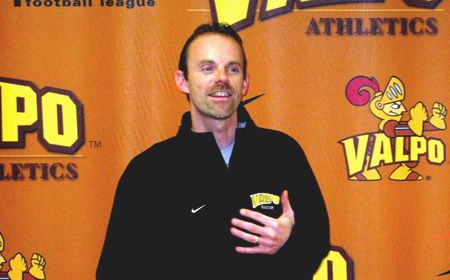 John Marovich is entering his third year as women's soccer head coach in 2010.

“Our soccer programs have shown consistent improvement since our move to the Horizon League, and this is a direct result of Mike and John's efforts,” said LaBarbera. “Mike has proven to be one of college soccer's bright young coaches and an effective leader.  John has shown the skill to continue the tradition of success that began with our Mid-Con championships.  They both care deeply about their student-athletes.  We are pleased to have this long-term partnership with both Coach Avery and Coach Marovich and look forward to watching their teams compete for championships."

Marovich is entering his third season at head coach of the Crusader women's soccer program after previously serving six years as an assistant coach and as associate head coach. He has guided Valpo to 21 wins in his first two seasons and enters 2010 as the program's all-time leader in winning percentage. Last season, he led the Crusaders to an 11-9-1 record, a third-place finish in the Horizon League during the regular season and a berth in the league championship match.

“My staff and I are very pleased to have the support of our Director of Athletics Mark LaBarbera, Vice President Charley Gillispie and University President Mark Heckler as we move forward with our women's soccer program in the future,” said Marovich. “My family and I are extremely excited to have the opportunity to continue as members of the Valparaiso University community.  I would like to thank all of the individuals that have supported the program, along with the former players who have given great leadership and the current players who continue to sacrifice everyday to take our program to new levels.”

“Our team took another step forward last season by reaching the Horizon League Championship match and I am excited to continue to build on that progress in the coming seasons,” continued Marovich.  “As a Northwest Indiana native, I am looking forward to growing not only the soccer program at the University, but to continue to be an active resource for our local youth players. It is truly a privilege to work with our players and I am thrilled that this extension will keep my family and I in Northwest Indiana for years to come.”

Avery is beginning his fourth season as head coach of the Valparaiso men's soccer program. His program's all-time leader in winning percentage as well, Avery guided the Crusader side to a school-record ten victories last season while it also surrendered the second-fewest goals in a single year in program history. 2009 was the first season the Crusader men finished above .500 since 1987 and was just the second squad in program history to earn a win in postseason league tournament play.

“I'd like to thank President Heckler, Vice President Gillispie and Athletic Director LaBarbera for the faith they have shown in me as the head men's soccer coach, and for their continued commitment to our program's growth,” said Avery. “Our program has great momentum right now, and while we still have a ways to go to reach our goals as a program, we have made certain and significant strides.  I am humbled and honored to lead this program through a time of real excitement for soccer, the athletic department, and for the entire Valparaiso University community.”