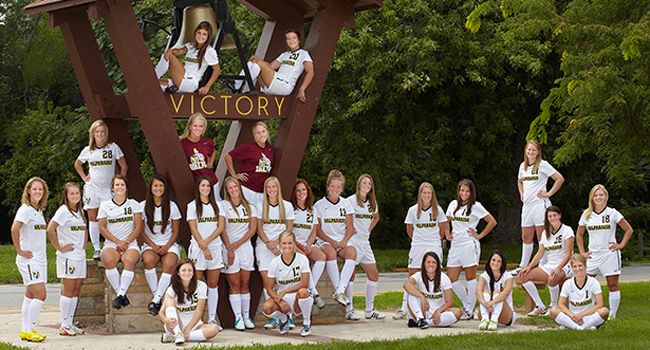 A talented and experienced women’s soccer team will take the field for Valparaiso University this fall as the Crusaders look to move back up the Horizon League standings and return to the conference tournament at season’s end.  Head coach John Marovich returns for his fourth season at the helm of the Brown and Gold, returning 19 letterwinners, including 10 starters, from last year’s squad.  Valpo has been predicted to finish seventh overall, but looks to surprise the prognosticators with a top half finish in the conference.

Seven seniors will look to lead the way for the Brown and Gold in 2011 after helping Valpo score 26 victories and nine draws during the last three seasons in a Crusader uniform, including a trip to the Horizon League championship match in 2009.

Team captains Brooke Henderson and Tracy Roos return for their final season in a Valpo uniform.  Henderson has started 51 matches during her career, scoring three goals and handing out three assists from the midfield.  She was a Second Team All-Horizon League selection as a junior.  Roos has started all 58 matches during her career with the Crusaders, anchoring the defense.  As a junior, Roos never stepped off of the field, playing all 1,733 minutes.

Casey Pedersen is a fifth-year senior on the roster this season, but appeared in a Brown and Gold uniform for the first time in 2010 after transferring from Binghamton University.  In her first season with Valpo, Pedersen led the Crusaders with four goals and 10 points, and will look to head up the offense again this year.

Sammy Olson has started 53 matches, including all 39 over the last two seasons, and will become the first Crusader in program history to compete over five different seasons.  She missed most of her freshman year with an injury and was granted a redshirt year, allowing her to return to the field this season.  A mainstay on the backline, she has helped solidify the defense in recent years.

Laura Romberg and Mikki Nuccio have been valuable assets off of the bench for the Brown and Gold throughout their careers.  Romberg, a defender, has appeared in a Valpo uniform 56 times, while Nuccio has played in 52 contests as a reserve forward.

Valpo’s final senior, Becky Clever, has proven to provide a spark off of the bench as well throughout her career, scoring a pair of goals as a forward.

Valpo’s juniors add upper class experience to the Crusader roster.  Luisa Desario has been a force offensively over her first two seasons as a forward, scoring nine goals and tallying 23 total points.  She enters her junior year ranked seventh in school history already with 107 career shot attempts and is tied for ninth all-time with four match-winning goals.

Trisha Wladecki has also contributed both up top and in the midfield for the Brown and Gold in her first two years with the program, scoring a pair of goals and handing out four assists.  She has started 27 matches during her first two years, appearing in all 39 contests.

Rachel Hoaglin and Janine Lytle have both been mainstays in the starting lineup throughout their Valpo careers.  Hoaglin scored seven times and tallied 19 points as a freshman while adding her eighth career goal last year from the midfield.  Lytle has started all 39 matches on defense, and earned Second Team All-Horizon League accolades one year ago.  She tallied a pair of goals for the Crusaders last year, including a match-winner.

Junior Catherine Terrell has also seen action in every match during her career, and made 11 starts one year ago.  She has tallied three career goals and her first collegiate assist last season set up a match-winner.

Rachel DeFrank enters the season as the Crusaders’ backup goalkeeper.  She did not see action in 2010, but did appear as a freshman.  DeFrank has not surrendered a goal during her collegiate career.

Sophomore goalkeeper Kristen Manski started 17 matches for the Crusaders during her rookie campaign.  She posted a 1.20 goals against average as a freshman, fourth best in school history, while recording five shutouts.  Manski will look to add to her totals in year two as a collegian.

Amanda Ulin started all but one match of her freshman season on defense, playing the entire match on 12 different occasions.  Hailey Chmela and Lauren Gagnon both bolstered Valpo’s midfield in 2010.  Chmela came off of the bench in 17 contests while Gagnon drew 11 starting assignments and tallied a goal and an assist.

Tara Ellis and Katie Gratzianna also got their first taste of collegiate soccer last season, with Ellis starting a pair of matches.  Both will battle for even more playing time with a year’s experience under their belt.

Marovich has brought in six talented freshmen to the program for the 2011 season, all of whom will compete for playing time.

Alex Beck, a defender, led Boyd High School in Texas to a state championship and a state runner-up finish during her prep career for a team that ranked as high as #2 nationally.  Kelsey Draper earned First Team All-Ohio honors and will vie for time in the Crusader midfield.  She helped lead Perrysburg High School to a regional final as a senior.

Abby Kenyon will look to add offense for the Crusaders after earning All-Federal League honors three times at Jackson High School in Ohio.  She helped lead the Polar Bears to the state quarterfinals twice and was her school’s Female Athlete of the Year as a senior.

Erika Schoemann comes to Valpo from Calgary, Alberta, Canada, where she led Saint Mary’s High School to the quarterfinals of the Calgary Senior High School Athletic Association twice, including a championship match appearance.  She led the league in goals and assists.

Rachel Sheehan arrives at Valpo from Thornton, Colo., where she earned Second Team All-Front Range League honors twice.  She will look to add depth to the midfield.  Freshman Kristen Warner was Glenbard South’s leading goal scorer and earned All-Western Sun Conference honors in Illinois.  She will be competing for time in the Crusader midfield.

Valpo will play nine times at home this season, and will host a tournament for the first time in school history.  The Brown and Gold will host the Crusader Classic Sept. 23 and 25 with IUPUI, Air Force, and Campbell visiting campus.

The Crusaders will head out of the region to play at the Liberty Invitational over Labor Day weekend, facing the host Flames in addition to Coastal Carolina.

The eight-match Horizon League slate opens at home as Valpo hosts Green Bay on Sept. 18 and closes Oct. 28 at Youngstown State before the top six teams in the league compete in the conference tournament.

With a balanced roster of experience and youth, Valparaiso looks for an exciting season on the pitch in 2011.  A challenging non-conference schedule is designed to prepare the Crusaders for the rigors of Horizon League action.  If all works according to plan, the Brown and Gold will continue their climb up the conference standings.