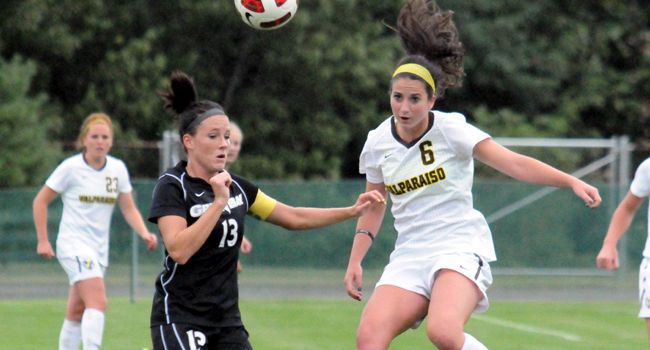 The win was Valpo’s first Horizon League opener in five tries since joining the conference prior to the 2007 season.

Hoaglin put the Crusaders on the scoreboard just 1:58 into the match, the second fastest goal in school history to start a match.  Catherine Terrell (Brighton, Mich./Brighton H.S.) played the ball into the middle of the box for Brooke Henderson (Westlake, Ohio/Westlake H.S.), about 15 yards from goal.  Henderson could not find room around a Phoenix defender, but slotted the ball to Hoaglin in the right corner of the six yard box.  Hoaglin chipped the ball over Maddie Drusch into the top left corner of the goal for her team-leading fourth goal of the season, and second match winner.

“We've talked about how we've started a lot of games fast and gotten quick chances, but haven't been able to finish those opportunities,” head coach John Marovich said afterwards.  “We came in knowing that Green Bay does a great job defending, so we knew we had to take advantage and put away any chances we got early.  At the end of the day, getting an early goal like this really helps to take a lot of pressure off of us."

The Crusader continued to put on pressure throughout the opening half, forcing Drusch to make three saves to keep the margin at one heading into intermission.  Valpo outshot the Phoenix 6-2 in the opening 45 minutes.

Green Bay (2-6-2, 0-1 Horizon) finally got a few shots off in the second half, but Manski made a pair of saves to record her seventh career shutout, moving her into a tie with Amy Cavanaugh (1996-1999) for third all-time in clean sheets.

“Our defense really did a great job today,” Marovich added.  “We knew Green Bay would try to play a lot of balls in up in the air, and I thought we did a great job going up to win those initial headers.  We did a good job then as well dealing with (Hekla Palmadottir) when she did come up with the ball, hanging with her and not letting secondary balls get behind us.  Kelsey (Draper) and Casey (Pedersen) were great, winning a lot of headers for us in the midfield today.  I thought the work those two and our back four put in really were the key to keeping Green Bay off the scoreboard.”

Valparaiso (4-3-1, 1-0) will take to the road on Sunday afternoon, heading to Bowling Green, Ohio, to battle the Falcons of Bowling Green.  Kickoff is set for 12 p.m. CDT.

Match Notes: Valpo is now 4-8-2 all-time against Green Bay but 4-0-2 in the last six meetings … Hoaglin now has 12 career goals, tied with Lori Johnson (2005-2008) for eighth all-time … Hoaglin also has 30 career points, 10th  in school history … she has nine points this year … Terrell’s assist was her third of the season and fourth of her career … Henderson’s helper was her first of the year and fourth all-time … Luisa Desario (Bartlett, Ill./Bartlett H.S.) had a team-high four shot attempts in the match … the fastest goal in school history was 44 seconds by Lori Moore in 2002 at Oakland.