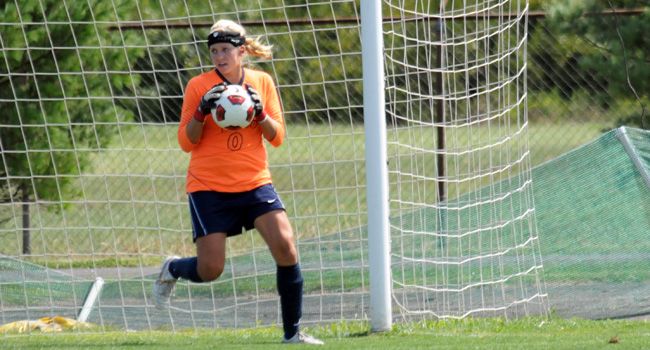 Valparaiso and Air Force concluded the Crusader Classic on Sunday afternoon playing to a 0-0 double-overtime draw at Eastgate Field.

“This was a great test for us,” head coach John Marovich said after the match.  “The different things and styles of play we saw this weekend are things we will see in the next few weeks as we turn our attention to Horizon League play.  We are in the middle of a tough stretch with three games in a six-day span.”

The Crusaders controlled the play throughout the first half, holding a 9-2 shot advantage and winning eight corner kick opportunities in the opening 45 minutes.  Valpo could not get a ball past Falcon netminder Kelly Stambaugh though, as she made three of her six saves in the half.

“The first half we had a great run of play but we just couldn’t tuck the ball away,” Marovich added.

Air Force (4-5-2) came with the pressure in the second half, outshooting the Brown and gold 7-2, but Kristen Manski (Saint Charles, Ill./North H.S.) made four saves to help force overtime.

“Our back four did a nice job of stepping up,” Marovich said.

Both Stambaugh and Manski were forced to make one stop in extra time as they both earned the shutout on the afternoon.  They both finished with six saves on the day.  For Manski, the clean sheet was her fourth of the season, tying her with Rose Holtkamp (2001) for eighth on the school’s single season charts.

Valpo finished the match with a 14-11 shot advantage and a 9-5 corner advantage.

Valparaiso (5-4-2) will take to the road for its next two matches beginning on Wednesday night.  The Crusaders will return to Horizon League play with a trip to Loyola (Chicago) in the Windy City.  Kickoff is set for 7 p.m.