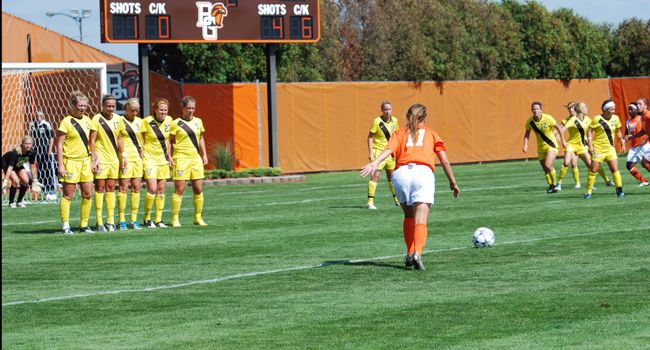 This Week in Crusader Soccer: Valparaiso returns to Horizon League action this week while beginning a brief two-match road trip.  The Crusaders head to the Windy City on Wednesday evening to battle the Ramblers of Loyola (Chicago) looking to remain perfect in conference action.

On the Air: Wednesday’s match at Loyola can be seen live online through the Horizon League Network. A link will also be provided at valpoathletics.com. Live stats will be available through valpoathletics.com for the match as well.

Head Coach John Marovich: John Marovich holds a 31-27-11 record both overall and with Valpo in his fourth season at the helm of the Brown and Gold.  Just the third head coach in program history, Marovich has the best winning percentage (.529) ever at Valpo, and ranks second in total victories.

Series Notes: Valparaiso and Loyola are meeting for the 19th time on the pitch.  The Ramblers are the only team that the Crusaders have faced in every season since the Brown and Gold’s program was founded in 1993.  Loyola holds the series advantage 14-4 and has won nine straight meetings against the Crusaders including a 1-0 triumph on Oct. 1 of last season at Eastgate Field.  Valpo’s last win in the series came on Nov. 2, 2001, a 1-0 win in Chicago.  In matches played at Loyola, the Ramblers hold a 6-3 advantage between the two schools.

Wrapping Up Last Week’s Action: Rachel Hoaglin started the scoring with her fifth goal in as many matches on Friday night, but Campbell rallied and scored the match-winner with 5:24 remaining to post a 3-2 victory at Brown Field on day one of the Crusader Classic.  The Camels took a 2-1 lead before Brooke Henderson tied the match at two with her goal with just under 15 minutes remaining.  In Sunday’s tournament finale against Air Force, the two schools battled to a 0-0 double overtime draw at Eastgate Field. Kristen Manski made six saves in goal while registering her fourth shutout of the year.

Scouting Loyola: The Ramblers are opening Horizon League play on Wednesday evening hosting the Crusaders after playing their last four matches on the road.  Loyola has dropped five straight contests, all via shutout, after a 5-0 loss at #17 Texas A&M on Sunday afternoon.  Ana Michelini leads Loyola’s offense with two goals and five points, and is the only Rambler with more than two points on the year.  In goal, Monica Gonyo and Katie Groesch have split time.  Gonyo has posted a 1.78 goals against average, has a .704 save percentage, and has registered three shutouts.  Groesch has tallied a 2.12 GAA, a .722 save percentage, and has notched one clean sheet.

One of Three Unblemished in League Play: With a 1-0 record in Horizon League play, Valpo is one of three schools without a loss or a tie to their record.  Milwaukee is 2-0 while Loyola has yet to play a conference match.

Quite a Scoring Streak: Rachel Hoaglin’s goal against Campbell on Friday night marked the fifth straight match in which the junior scored.  Her string began back on Sept. 9 at IUPUI and included three match-winning tallies.  Hoaglin was shutout to end the streak on Sunday against Campbell for the first time since Sept. 4 at Liberty.

Terrell Continues to Lend a Helping Foot: Catherine Terrell handed out her team-leading fourth assist of the season on Friday evening against Campbell.  The junior is now tied for ninth on the school’s single season assist charts, one helper shy of fourth place.

Four Out of Five Not Bad: Kristen Manski has recorded shutouts in four of Valpo’s last five matches following the 0-0 double overtime draw against Air Force on Sunday afternoon.  As a team the Crusaders have recorded five total clean sheets this year.

Surpassing Last Season’s Output: Valpo has already scored 16 goals this season in the first 11 matches of the year.  In 2010, the Crusaders scored a total of 15 goals in 18 total contests.

Moving Onto the All-Time Scoring Charts: Rachel Hoaglin has moved into a seventh place alone on Valpo’s career scoring list.  Hoaglin has 34 points during her three-year Crusader career, passing Sarah Jewell (2006-2009) and Jackie Kondratko (2006-2009), each of whom had 33 points at Valpo.  She is one point shy of Lindsay Holley (2001-2004) for sixth on the all-time charts and two points behind Elizabeth Tatro (1993-1996) for a spot in the top-five.

Keeping Then Clean: Kristen Manski has passed Amy Cavanaugh (1996-1999) and moved into third place with nine career clean sheets in a Crusader uniform.  In addition, Manski’s four shutouts this season have her tied for eighth on the team’s single season charts with Rose Holtkamp (2001).  Her next shutout this season will move her into a tie for fifth on the single season charts.

This and That: Valpo has tied its last five overtime contests dating back to last season ... all-time the Crusaders are 14-15-27 in extra session matches ... 48% of Valpo’s shot attempts this season have been on goal ... the Crusaders have outshot their last six opponents ... Kristen Manski has moved into ninth place all-time with 90 career saves.