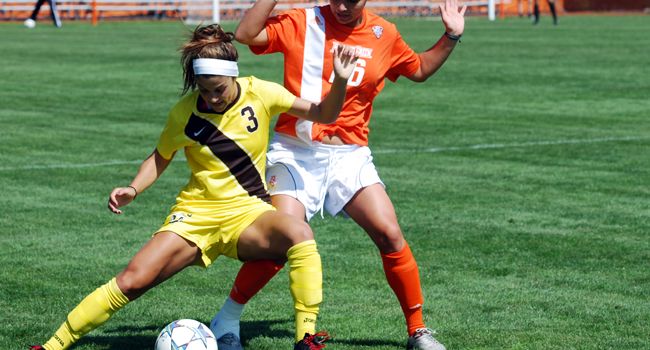 The victory snapped a nine-match losing streak for the Crusaders against the Ramblers and moved Valpo into a first place tie with Milwaukee atop the Horizon League standings.

“I’m very happy for our kids with the effort they put in,” head coach John Marovich said after the match.  “It’s a good finish to the rough stretch of three matches in six days that we’ve just been through.  Anytime you get a win on the road it is huge and this is a big three points for us.”

Janine Lytle (Wooster, Ohio/Wooster H.S.) started the play with a free kick from midfield.  Casey Pedersen (Northville, Mich./Mercy H.S.) got a head on the ball to flick it toward goal.  Rachel Hoaglin (Lakeville, Minn./Academy of Holy Angels H.S.) got a touch on the ball before Desario finished the goal at the far post.

The Crusaders started the match with the offensive pressure, winning five corner kicks in the opening 30 minutes.

“We did some good things during the first 30 minutes,” Marovich said.  “We moved the ball well, created some chances, and had lots of corner kicks.”

Neither team could find the back of the net in the first half though.

“The game changed and we did a good job as the second half began,” Marovich added.  “The game became a little more direct and we began winning more balls in the air.”

The match remained scoreless until Desario scored her third goal of the year and first match-winner.

“This was just a typical Horizon League battle where you have to find a way to get a goal,” Marovich said. “That’s what we did.”

Loyola (3-7-1, 0-1 Horizon) outshot Valpo 7-5 in the match, including 6-2 in the second half, but Kristen Manski (Saint Charles, Ill./North H.S.) made three saves to register her fifth shutout in the last six matches.  Monica Gonyo made one save for the Ramblers.

Valparaiso (6-4-2, 2-0) will have a week off before heading to Wisconsin next Wednesday evening for a first place showdown with nationally-ranked Milwaukee.  Kickoff is set for 7 p.m.

Match Notes: Loyola leads the all-time series 14-5 … Valpo has won both Horizon League matches by a 1-0 score … Manski now has 10 career shutouts … Manski’s shutout was her fifth of the year, tied for fifth on the school’s single season charts … Desario’s match-winner was the fifth of her career, tying her for eighth all-time at Valpo.