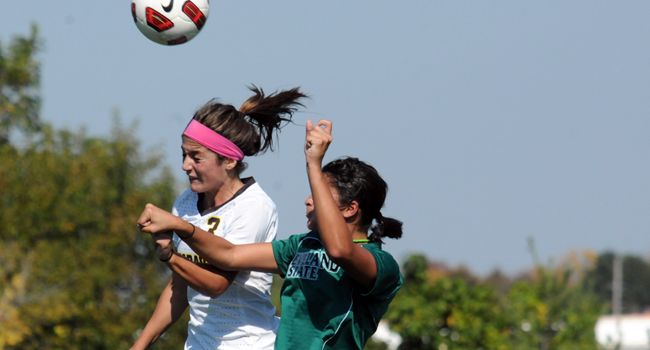 With the match scoreless for more than 87 minutes, Trisha Wladecki (Avon Lake, Ohio/Avon Lake H.S.) won a ball near the end line in the far corner, and sent a service into the middle of the box.  Rachel Hoaglin (Lakeville, Minn./Academy of Holy Angels H.S.) got a touch on the ball, but it went through to Nuccio in the center of the box and she found the upper-netting for the lone goal of the day.  For the senior, it was her second goal of the year, both of which have resulted in match-winners.

“Trisha worked really hard to win that ball and made a great service to Mikki,” head coach John Marovich said of the match-winning goal.  “For us to get another three points in this league is just huge.  It’s the 13th best conference in the country according to the latest RPI and every match is a battle.”

Cleveland State (8-5-1, 1-3-1 Horizon) had the match’s first quality scoring opportunity less than 10 minutes into the match.  Following a Crusader foul in the penalty area, Jaime Avona took a penalty kick, but missed it off of the right post and Valpo avoided an early deficit.

Valpo then put the pressure on the Vikings the rest of the first half, but was unable to find the back of the net.  The Crusaders outshot Cleveland State 11-6 over the opening 45 minutes, but Viking netminder Becky Williams made five saves to keep the Brown and Gold off of the scoreboard.

The Crusaders put four more shots on goal in the second half before finally breaking through with a goal.

“We had a good amount of possession today,” Marovich added.  “When we got a hold of the ball we were able to do some good things.  It was warm out there today but all of our bench players that came in were really able to lift us in the game.”

Valpo finished the match with a 20-11 shot advantage, including a 10-3 mark on goal.  Williams made nine stops for the Vikings while Rachel DeFrank (Mason, Ohio/Mason H.S.) made three stops for her first collegiate shutout.  The Crusaders also held a 7-1 advantage in corner kick opportunities.

Valparaiso (7-5-2, 3-1) will have six days off before returning to action on Saturday afternoon when the Brown and Gold travels to the Motor City to battle Detroit.  Kickoff is set for 12 p.m. CDT.

Match Notes: Valpo leads the all-time series with Cleveland State 7-1 and is 4-1 against the Vikings at Eastgate Field … the shutout was the seventh of the season for the Crusaders, fourth most all-time on Valpo’s single season charts … Nuccio now has four career goals, 10 career points, and three career match-winners … Hoaglin’s assist gives her three on the year and a team-leading 15 points … Hoaglin now has 36 career points, tied for fifth all-time with Elizabeth Tatro (1993-1996) and is tied for ninth all-time with eight career assists … Wladecki also has three assists on the season and has seven for her career … Luisa Desario (Bartlett, Ill./Bartlett H.S.) had a team-high five shots for the match and now ranks fifth all-time with 148 for her career.