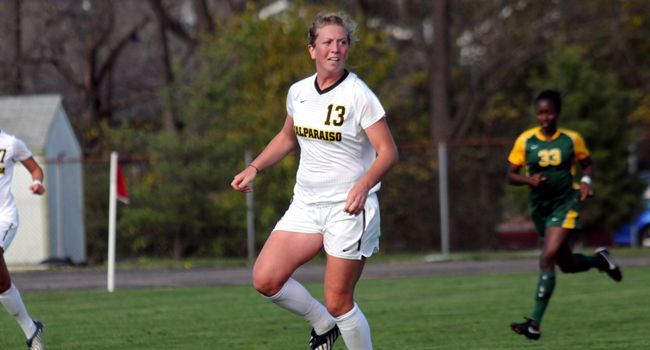 Casey Pedersen finished with four points last week, including a goal and an assist against Wright State on Sunday. (Ray Acevedo)

Valparaiso University midfielder Casey Pedersen (Northville, Mich./Mercy H.S.) has been named the Horizon League Women’s Soccer Player of the Week after leading the Crusaders to a 1-0-1 record this past week and helping the Brown and Gold secure a home tournament match in next week’s Horizon League Championships.

The Player of the Week honor is the first of Pedersen’s career and she is the second Crusader to earn the accolade this season.  Rachel Hoaglin (Lakeville, Minn./Academy of Holy Angels H.S.) picked up the honor back on Sept. 12 for Valpo.

Pedersen was involved in all three Valpo goals on the week, beginning with an assist on the match-winner on Wednesday afternoon’s 1-0 victory over Butler in rainy, windy conditions.

On Sunday afternoon, Pedersen scored her third goal of the season on a penalty kick early in the first half to tie the match at one against Wright State.  Late in the opening stanza, the fifth-year senior added her third assist of the season on a goal which gave Valpo a 2-1 lead.  The Crusaders and Raiders would eventually finish in a 2-2 double-overtime draw.

Pedersen now has nine points on the season and in two seasons with the Brown and Gold has seven career goals, five career assists, and 19 career points.

Valparaiso (8-6-3, 4-2-1 Horizon) will close the regular season on Friday afternoon at Youngstown State beginning at 2 p.m. CDT and the match can be seen live online through the Horizon League Network.

The Crusaders will finish as either the third or fourth seed for next week’s tournament and host a team to be determined on Nov. 1 beginning at 1 p.m. at Eastgate Field.