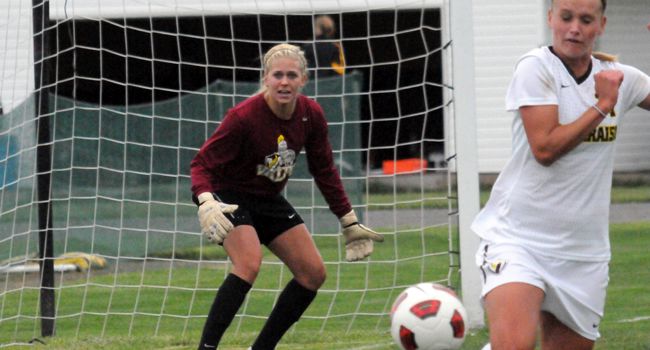 Valparaiso wrapped up the regular season on Friday afternoon battling Youngstown State for 110 minutes, but neither team could find the back of the net and the two sides settled for a 0-0 double-overtime draw at Stambaugh Stadium in Youngstown, Ohio.

“We didn’t create the chances today like we have most of the season,” head coach John Marovich said after the match.  “We struggled to keep the ball.  I think the result was fair because of that.”

The Crusaders had their best chances in the opening half, outshooting the Penguins 7-5 before intermission.   Casey Pedersen (Northville, Mich./Mercy H.S.) had Valpo’s best opportunity, just before the break, but Nicole Kline made the save moving to her left.

Kristen Manski (Saint Charles, Ill./North H.S.) made seven saves for the Crusaders to earn her seventh shutout of the season for the Brown and Gold.  Kline finished the match with four stops for the Penguins, all in the first half.

Valparaiso (8-6-4, 4-2-2) is assured of finishing the season over .500 for the seventh time in the last eight years and will host a quarterfinal match in the Horizon League Tournament on Tuesday afternoon at Eastgate Field.

“It’s time for us to get refocused and get ready for Tuesday,” Marovich concluded.

The Crusaders will be either the tournament’s third or fourth seed and will host an opponent yet to be determined. Kickoff is set for 1 p.m.  Tickets are $5 for adults, $3 for senior citizens and children, and Horizon League students are free with valid ID.

Match Notes: Valpo will finish third in the Horizon League standings for the season, matching the 2009 squad for the team’s highest finish since joining the conference in 2007 … the shutout was Valpo’s ninth of the season, second most all-time, trailing just the 2008 team’s 10 clean sheets … Manski’s seventh shutout of the year puts her in third place alone on the individual single season charts … Manski now has 12 career shutouts … Tracy Roos (Centennial, Colo./Cherry Creek H.S.) started her 76th straight match of her career, tied for sixth all-time with Jackie Thomas (2005-2008) … Roos ranks eighth all-time on the matches played list with the 76 appearances … Valpo has now tied seven straight overtime contests … this was Valpo’s second scoreless draw of the year … the Crusaders lead the all-time series with Youngstown State 8-0-3 all-time against the Penguins … the two sides have played to back-to-back draws.