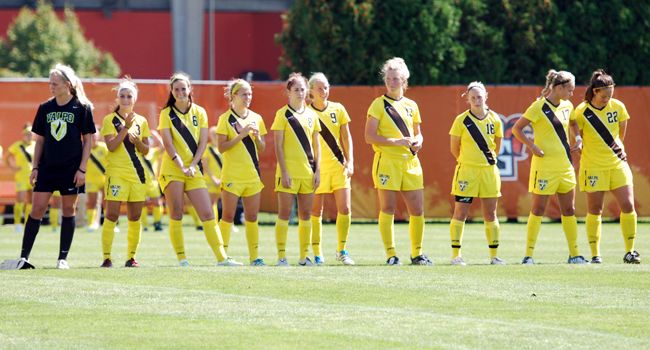 Valpo will take to the road one final time in the regular season on Friday. (John Enright)
Valparaiso at Youngstown State | October 28, 2011
Related Links
Related Links

This Week in Crusader Soccer: The 2011 regular season wraps up in women’s soccer this Friday afternoon as Valparaiso travels east to Youngstown, Ohio to battle the Penguins of Youngstown State.  With a victory the Crusaders will finish in a tie for second place during the regular season.  Valpo will wrap up the third seed for next week’s Horizon League Soccer Championship with a win or a Wright State loss or tie against Cleveland State on Friday.

Head Coach John Marovich: John Marovich holds a 34-29-12 record both overall and with Valpo in his fourth season at the helm of the Brown and Gold.  Just the third head coach in program history, Marovich has the best winning percentage (.533) ever at Valpo, and ranks second in total victories.

Series Notes: Valparaiso is 8-0-2 all-time against the Penguins in a series that dates back to 1999.  The Crusaders won the first seven meetings all-time between the two schools.  Last year, Valpo and Youngstown State battled to a 1-1 double-overtime draw to wrap up 2010.  The Crusaders are 4-0 all-time against the Penguins at Stambaugh Stadium but have not visited Youngstown, Ohio since a 2-0 win on Oct. 16, 2009.

Wrapping Up Last Week’s Action: Mikki Nuccio’s goal with five seconds remaining in the first half proved to be the difference on Wednesday as Valpo defeated Butler 1-0 at Eastgate Field.  Kristen Manski made eight saves in the shutout win on a rainy, windy, and cold afternoon.  On Sunday at Eastgate Field Wright State scored in the opening minute of the match and added the equalizer with just 2:35 remaining in regulation as the Raiders and Crusaders battled to a 2-2 double-overtime draw.  Casey Pedersen tied the match at one on a penalty kick seven minutes into the contest while Luisa Desario put Valpo on top late in the first half, only to see the visitors tie the contest.

Scouting Youngstown State: The Penguins are closing their season on Friday afternoon and are still in search of their first Horizon League win of the season.  Youngstown State has lost two straight following a 1-0 loss at Loyola (Chicago) on Sunday and the Penguins are 0-9-2 overall since a Sept. 2 win over Ursuline.  Jade Flory has paced the Youngstown State offense this season, scoring seven goals and adding three assists for 17 total points.  She has scored half of the team’s 14 goals.  Geneva Strelka has added three assists and is second on the team with seven points.  In goal, Ali Viola has played a majority of the minutes for the Penguins.  She sports a 1.34 goals against average and a .779 save percentage.  She has notched one shutout.

Crusaders Playing for Seeding in Horizon League Tournament: Valpo enters the final weekend knowing that the Crusaders will be playing at home on Tuesday, Nov. 1 in the quarterfinals of the Horizon League Tournament.  With a win against Youngstown State, the Crusaders will enter the tournament as the third seed.  Valpo can also finish as the third seed with a Wright State loss or tie against Cleveland State.  The Crusaders can finish no lower than the fourth seed.

Looking for Highest Horizon League Finish Ever: Besides seeding being up for grabs heading into the regular season finale, Valpo’s highest conference finish since joining the Horizon League is also on the line.  The Crusaders best finish was third in 2009 before advancing to the tournament championship match.  If Valpo wins Friday at Youngstown State, the Brown and Gold would finish tied for second place in the regular season standings after being picked to finish seventh in the league’s preseason poll.

Coming Home for the Tournament: Being assured of either the third or fourth seed in the upcoming Horizon League Tournament, the Crusaders have clinched a home match in the quarterfinal round.  Valpo will face an opponent to be determined at 1 p.m. on Tuesday, Nov. 1 at Eastgate Field.

Olson Becomes Valpo’s First Five-Year Player: Despite missing all season due to injury, Sammy Olson started the Senior Day match against Wright State on Sunday, becoming the first Crusader in school history to appear in a match in five different seasons.

Seven Shutouts Fourth Most Ever: With Valpo’s eighth shutout of the season on Wednesday (Oct. 19) against Butler, the Crusaders have matched the 2007 and 2009 squads for second on the all-time single season list.  The 2008 team holds the school mark with 10 clean sheets.

Pencil Her in the Lineup: Tracy Roos has started all 75 matches during her four year career with the Brown and Gold on the backline, tied for seventh on the all-time starts list.  Her next start will tie her with Jackie Thomas (2005-2008) for sixth on the charts.  Roos’ next appearance will move her into the top-10 on the matches played list as well, and tie her for eighth all-time with Cathy DeVito (1999-2002), Sarah Wittrock (1999-2002), and Thomas.

Hoaglin on the All-Time Scoring Charts: Rachel Hoaglin has moved into a seventh place alone on Valpo’s career scoring list.  Hoaglin has 36 points during her three-year Crusader career, tied with Elizabeth Tatro (1993-1996) for fifth on the career list.  She is four points shy of Lisa Springs (1998-2001) for fourth on the all-time charts.    She is also tied for eighth with five match-winning goals.

Desario in the Record Books Too:  Luisa Desario has scored 13 goals, tied with Jackie Kondratko (2006-2009) for eighth all-time at Valpo.  Desario is also one assist shy of the all-time list with seven career helpers tied with teammate Trisha Wladecki, trailing Lori Johnson (2005-2008), Laura Murphy (2005-2008), Jesse White (2006-2009) and current teammate Rachel Hoaglin for ninth place.  The trio all had eight assists.  Desario also moved into the top-10 all-time for points with 33, tied with Sarah Jewell (2006-2009), and Kontratko for eighth.

More Record Book Watching: Luisa Desario has moved into the top-five in school history with 152 career shot attempts, passing Lisa Springs (1998-2001).  Desario is 13 shots behind Elizabeth Tatro (1993-1996) for fourth on the all-time charts.  Brooke Henderson is also eighth on the career shot chart with 106 during her four years at Valpo.  Desario is also tied for eighth on the all-time list with five match-winning goals in her career after recording her most recent one at Loyola (Chicago).

Keeping Them Clean: Kristen Manski has passed Amy Cavanaugh (1996-1999) and moved into third place with 11 career clean sheets in a Crusader uniform.  In addition, Manski’s six shutouts this season have her tied for third with Erin Murray (both 2004 and 2007) on the single season charts. Manski is two shutouts behind Mele Cabral (2009) for second on the single season list at Valpo.

This and That: Valpo has tied its last six overtime contests dating back to last season ... all-time the Crusaders are 14-15-28 in overtime matches ... Valpo is assured of finishing at least .500 for the seventh time in program history.