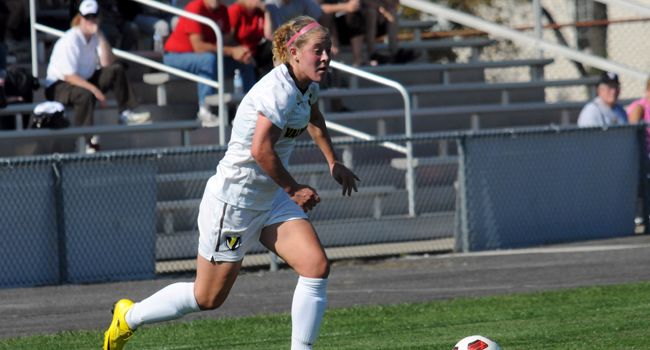 Trisha Wladecki earned a Board of Directors Award at Valpo. (Ray Acevedo)

Valparaiso University women’s soccer player Trisha Wladecki (Avon Lake, Ohio/Avon Lake H.S.) has been named one of nine recipients of the 2012 Board of Directors Award as part of this year’s Celebration of Undergraduate Scholarship on campus.

The junior’s oral presentation entitled The Universal Human Right to Healthcare: Finite Resources and Conflicts of Human Rights Must Limit the Human Right to Healthcare in Order for It to be Sensible in the Real World was one of approximately 75 projects in the event with approximately 150 students participating.  A member of Christ College, David Western was her faculty sponsor.  The presentation was judged by members of the campus community.

Wladecki received a medal and a certificate for her efforts, along with a gift certificate to the campus bookstore.  She also had lunch with the other winners and members of the Board of Directors last Friday (April 27).

On the field, the chemistry and biology double major has appeared in 58 matches during her first three seasons with the Brown and Gold.  She has two career goals and seven assists.