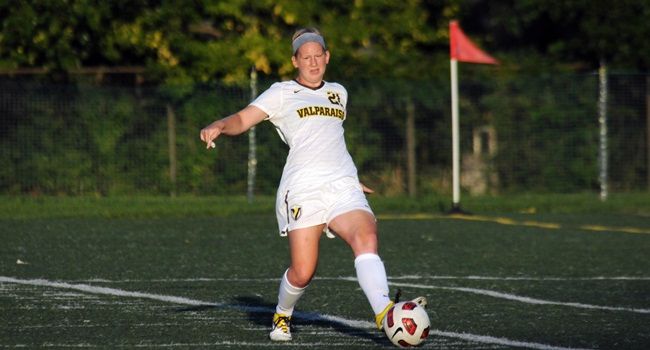 Junior Tara Ellis (Portage, Ind./Portage) scored her first career goal on a free kick late in the first half to give Valparaiso the lead, and senior Luisa Desario (Bartlett, Ill./Bartlett) found the back of the net for an insurance tally in the second half as the Crusaders defeated Western Michigan, 2-0, Friday evening at Brown Field.

“This is a quality win for us,” said Crusader head coach John Marovich. “Western Michigan is a very good side and has a lot of crafty player. They certainly challenged us tonight, and I feel really good about coming away with a win.”

Western Michigan, which entered the match on a four-game winning streak and whose only loss came to Illinois, had the better of the play for much of the first half, tallying five shots in the first 21 minutes, three of which had to be saved by Valpo goalkeeper Kristen Manski (Saint Charles, Ill./North) and one of which rattled off the post. But the Crusaders would be the first to find the back of the net. WMU was called for a foul just outside the box on the right flank in the 41st minute, and Ellis stepped up and drilled a shot into the upper left 90 to give Valpo the 1-0 lead.

“I thought in the first half, Western Michigan had the better run in the middle of the park,” said Marovich. “But Tara's goal was huge for us. It was a fantastic strike, she just stepped up and hit a great shot.”

The insurance tally came courtesy of Desario in the 59th minute. Sophomore Kelsey Draper (Perrysburg, Ohio/Perrysburg) ran underneath a short goal kick and placed a perfect header into the path of a charging Desario. The senior's first effort was turned away by Bronco goalkeeper Michelle Watson, but the rebound bounced directly back to Desario, and with Watson out of position, Desario easily chipped it into the back of the net for the two-goal lead. The senior now sits alone in fourth place in Crusader history with 41 career points.

“I thought we were better in the second half – we figured out how to play against their pressure and how to find opportunities to get forward,” said Marovich. “Draper and Desario teamed up for a nice goal and that was a big deal, because it really changed the complexion of the game. It allowed us to change the way we were playing and look to kill the game. It also presented us a challenge we hadn't faced, when Western Michigan went with four forwards up front, so we had to make some adjustments and got to learn a bit more about ourselves.”

Manski ended the night making six saves to earn the clean sheet, her third of the season and 15th of her career. Watson made a pair of saves in the opposite goal, as despite a 14-7 shot advantage, WMU only out-shot Valpo on goal, 6-4.

“Draper had a good game in the middle of the park for us tonight,” said Marovich. “Also, Manski did a solid job in goal to keep Western Michigan off the scoreboard.”

Valparaiso (3-2-1) is now unbeaten in its first four home games of the season, and will look to keep the streak alive on Sunday afternoon as it hosts Bowling Green at 1 p.m. The game will be at Eastgate Field, the Crusaders' first match of the season on the natural grass. The game can be heard locally on WVUR, 95.1 FM, and online at www.valpoathletics.com, which will also have a link for live stats.