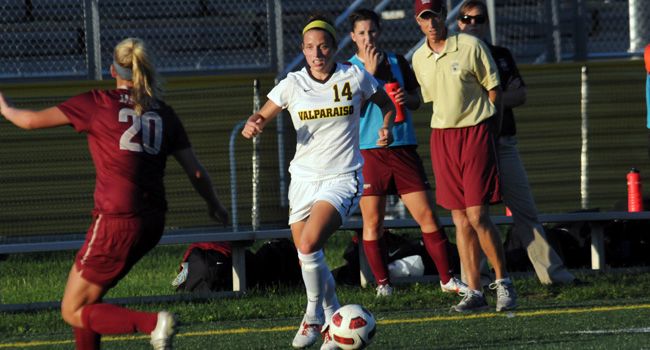 A goal off a corner kick by junior Katie Gratzianna (Elmhurst, Ill./York) in the 68th minute gave the Valparaiso women's soccer the lead on Saturday afternoon in Green Bay, Wis., and the Crusaders would not relinquish it, downing Green Bay by a 1-0 final.  The win ends the regular season with the Crusaders on 11 points in the Horizon League table, good for the third seed in the Horizon League Championship.

"We're definitely pleased with the result today," said Crusader head coach John Marovich.  "It's exciting to see our players finish in third place, with how tight the league race has been.  It was definitely a crazy day today - waiting on the Youngstown State-Wright State result, knowing what we had to do to host and knowing Green Bay had to push hard to get a win or tie to get in."

An even first half saw the Phoenix out-shoot the Crusaders 6-4, with both sides putting multiple attempts on goal.  Junior goalkeeper Kristen Manski (Saint Charles, Ill./North) stopped three shots in the opening 45 minutes to keep the Phoenix off the scoreboard, while Green Bay goalkeeper Nastacia Behle made two first-half saves.

Early in the second half, the teams learned that Youngstown State had defeated Wright State in overtime, meaning that the Crusaders knew they would have to win to earn a home game in the league tournament, while the Phoenix would have to win or tie to make the tournament.  Valpo kept Green Bay from getting any opportunities in the opening 20-plus minutes of the second half, while offensively, the Crusaders picked up three early shot attempts and earned four corner kicks.

It was the fourth corner kick of the second half that would lead to the game's lone goal, as junior Tara Ellis (Portage, Ind./Portage) sent the kick into the box and Gratzianna was there to head it home in the 68th minute.  It was the second goal of the season for the Crusader junior back and the team-best third assist of the year for Ellis.

"I thought in the second half we played well," said Marovich.  "It was nice to see us score on the corner - it's something we've been working on the last few days in training, and it's always nice to see those things translate to the match.  Then we did a really good job in the last seven minutes killing the game off."

With Green Bay (5-11-1, 2-4-1 Horizon) now knowing it would have to score to make the tournament, Valpo did a stellar job keeping the Phoenix at bay, surrendering just two second-half shots, neither of which were on frame.  The Crusaders were able to maintain possession, earning three late corners as the clock wound down and Valpo clinched the third seed and a home game in the tournament.

Valpo ended the game with an 11-8 edge in shots, and put six on goal to Green Bay's three.  Manski tied the Crusader single-season shutout record with her tenth clean sheet of the campaign.

Valparaiso (10-5-3, 3-2-2 Horizon) reached double figures in wins for the eighth time in the last 12 years with Saturday's win.  As the third seed in the Horizon League Championship, Valpo will host sixth-seeded Loyola on Tuesday afternoon at 3 p.m. at Eastgate Field.  Live stats for the game will be available through www.valpoathletics.com.