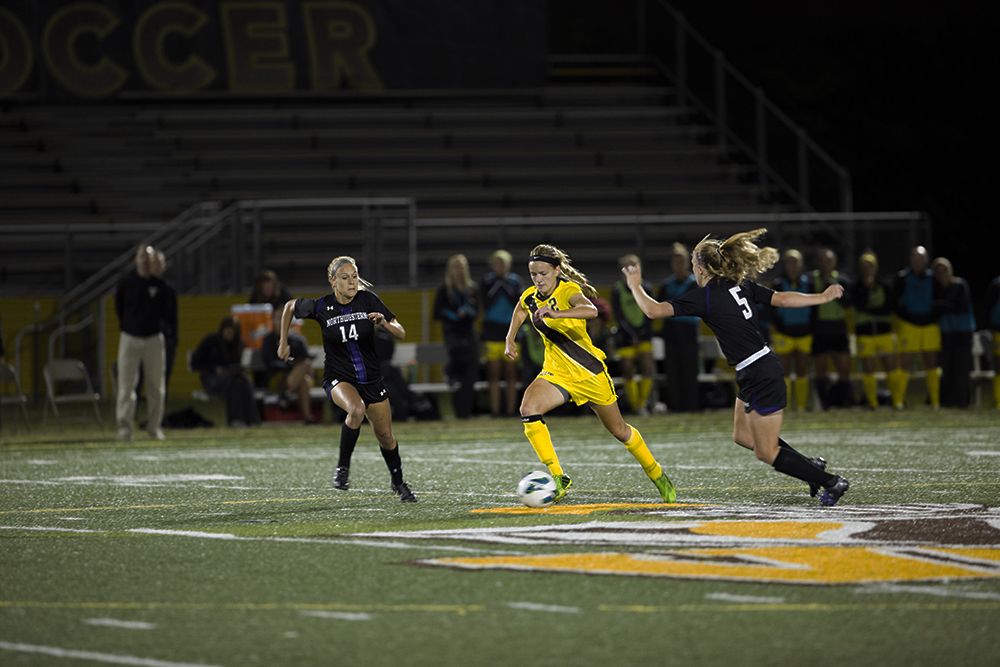 Early pressure from the Crusaders set the tone for the remainder of the match Thursday night against the Northwestern Wildcats.  That pressure eventually led to the lone goal scored in an impressive 1-0 victory for the Crusader women. Freshman Katriona Anesini (Seattle, Wash./Ballard) put Valpo ahead in the 33rd minute of the match and the Crusader defense ensured that the freshman's goal would be the game winner.

The Crusaders put their stamp on the game early; dominating possession and building a dangerous attack through the midfield.  Early on the game, the Crusaders put together several periods of solid possession that resulted in great chances on goal.  Senior Hailey Chmela (Hawthorn Woods, Ill./Lake Zurich) and sophomore Rita Craven (Frankfort, Ill./Lincoln-Way North) each took shots early in the game. Craven's chance forced the Wildcat goalie to produce an important early game save.  Craven was active all night, pressuring the Northwestern backs and turning them over in dangerous areas.  This type of pressure would eventually lead to the Crusader goal.

"I thought in the first half we had a good start to the game - we developed a rhythm and really started to keep the ball and build through our midfield", said head coach John Marovich.  "Our defending in the first half really allowed us to keep the ball and play the way that we wanted to.  Our backs made it difficult to turn and face goal.  As a result, we were able to win back possession and limit their amount of quality chances."

In the 33rd minute of the match, the Crusaders won the ball in the midfield and immediately looked to go forward.  An early ball played into Sophomore Jordyn Ryfiak (Rockford, Mich./Rochford) resulted in a creative flick into the Wildcat penalty area.  The flick was met by Anesini, who showed tremendous skill finishing the chance with a one touch effort.  The play could not have been more perfect as the goal was not only Anesini's first touch of the match, but her first career goal and game winner.

Needing a goal in the second half, Northwestern played a more direct style of soccer in hopes of getting in and behind the Crusader back line.  Although the Wildcats took 9 shots in the second half, they were unable to create a quality chance.  Kristen Manski (Saint Charles, Ill./North) only needed to make 4 saves on the night, as Tara Ellis (Portage, Ind./Portage), Shelby Oelschlager Glendale, Ariz./Mountain Ridge), Kelsey Draper (Perrysburg, Ohio/Perrysburg), and Jennifer Fassbinder (Hudson, Wis./Hudson) were able to sort out much of the Wildcat pressure before it became an issue.

"The second half was a little different; they came out and played more direct and really tried to press the game.  They bypassed their midfield and played direct ball into their forwards to run onto.  This caused a little more trouble for us but our backs were able to win balls in the air and keep the ball out of our area."

Each of the five games the Crusaders have played in this season has been decided by just 1 goal.  The importance of this type of win cannot be understated, as the Crusaders now sit at 3-2-0 on the season.  Going forward, a close victory against a good side such as Northwestern will only help the Crusaders overcome challenges down the road.

"Northwestern was a very good side; they had athletes who were very dangerous in the attack.  There were going to compete hard for 90 minutes.  We knew being up a goal, they were going to fight hard to try and level the game.  I really liked how we handled that pressure.  We played a little more direct than I would have liked, but it allowed us to kill the game a preserve the win.  It was good to get a win at home against a side like Northwestern.  This win will give us an opportunity to work on some things in training and keep improving as we go forward."

The Crusader women are back in action at Brown Field on Sunday to take on the IPFW Mastodons (2-2-0).  The match is scheduled for a 5 p.m. kickoff.  Live stats will be available through ValpoAthletics.com.