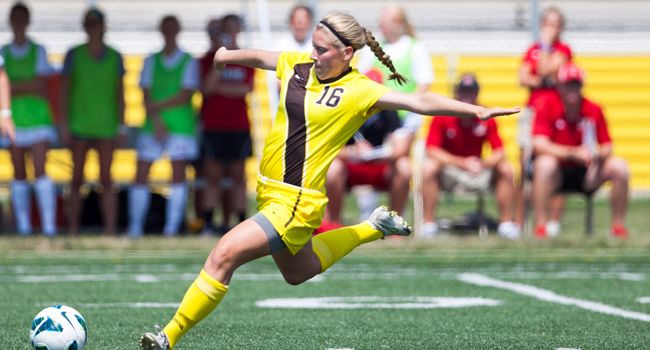 This Week in Crusader Soccer: The Valparaiso women’s soccer team returns to Brown Field for a pair of matches this week, hosting Northwestern Thursday night and IPFW Sunday evening. The two home contests conclude a season-opening stretch where the Crusaders play five of their first six fixtures at home.

Previously: Valpo experienced the best and the worst of extra time last week. The Crusaders defeated Grand Canyon early Saturday morning on a goal in the 94th minute by Jordyn Ryfiak, 1-0, but then lost by the same 1-0 score at Kent State on Sunday on a goal with just over a minute to play in the second extra session.

Following the Crusaders: Both matches this weekend will have live stats available through ValpoAthletics.com. Meanwhile, the Northwestern match is the first of six Crusader women’s soccer matches this year which will have free live video on the Horizon League network. Over the course of the 2013 season, WVUR, Valpo’s student radio station, will also be broadcasting select matches.

Head Coach John Marovich: John Marovich holds a 46-37-17 record both overall and with Valpo entering his sixth season at the helm of the Brown and Gold. Just the third head coach in program history, Marovich has the best winning percentage (.545) ever at Valpo, and ranks second in total victories.

Series Notes: Northwestern - Valpo is 0-4 all-time against the Wildcats, but the two teams have not met since 2005, a 2-0 Northwestern win in Evanston. This will be just the second time that the Crusaders have hosted the Wildcats.
IPFW - The Crusaders hold a 9-2-1 edge in the all-time series against IPFW and have won nine of the last ten meetings. Last season, the two teams met in Fort Wayne and Valpo came away with a 1-0 win on a goal 96 seconds into overtime from Rita Craven.

Scouting the Opposition: Northwestern - The Wildcats enter Thursday’s contest in search of their first win of the year, as they are currently 0-3-1, with their draw coming against Northeastern. Three different players have combined for Northwestern’s three goals, while Rachel Bergman and Jenna Hascher have split time in net, the latter surrendering just two goals in 185 minutes.
IPFW - The Mastodons sit at 2-2-0 entering this week’s action, with a matchup against Miami on the docket Friday prior to Sunday’s game. IPFW has scored four goals in its four games, with Gaby Romo leading the way with a pair of goals, and has surrendered just four goals as well.

A Two-Day Affair: Valpo’s match against Grand Canyon Friday night couldn’t be contained to one day, as the winning goal by Jordyn Ryfiak was finally scored at approximately 12:20 a.m. Saturday morning. The latest end to a home match in Crusader history came about because of a pre-game delay of nearly three hours due to storms moving through Northwest Indiana.

One-Nil: Through four games in 2013, Valpo has ended with four 1-0 results, which is anything but a new sight for fans who had watched the Crusaders in 2012. Of Valpo’s 19 matches last season, over half of them resulted in 1-0 final scores, with the Crusaders going 6-5-0 in those contests.

Extra Time: The Crusaders played their first two overtime matches of the weekend last year, winning the first before falling in the second. The win over Grand Canyon was Valpo’s first extra time victory since beating IPFW on Sept. 16 of last year, 1-0, while the loss at Kent State was the first OT loss since a 3-2 decision against Eastern Michigan on Sept. 10, 2010. Under Marovich, the Crusaders are now 4-3-17 in overtime contests.

Maintaining Strong Defense: With three of the regular back four, along with the starting goalkeeper, back from the 2012 team which led the nation in goals against average, you could expect the Crusaders’ defense to be a strength early on in 2013, and it has proved to be so far. Through the first four games of the year, Valpo has surrendered just two goals, with the first goal in the run of play against the Crusaders coming in the 109th minute at Kent State.

Manski Maintains Strong Play: The deciding goal against Kent State was the first senior goalkeeper Kristen Manski had given up in the run of play in 464 minutes, as the senior has been stellar in goal so far this season. Manski, who was tabbed the HL Player of the Week by College Sports Madness this week, has given up just two goals in four games, and leads all Horizon League regulars in both goals against average (0.47) and save percentage (.900). In fact, dating back to last year, Manski has a run of 17 consecutive matches where she has given up one goal or fewer.

Ryfiak Opens Her Account: Sophomore Jordyn Ryfiak scored for the first time this year in the win over Grand Canyon on Friday, finding the match-winner four minutes into overtime. For Ryfiak, it was her fourth career goal, and the third tally of her career that has been a game-winner in a 1-0 decision. Ryfiak previously accounted for the match’s lone goal last year against St. Mary’s and Detroit.