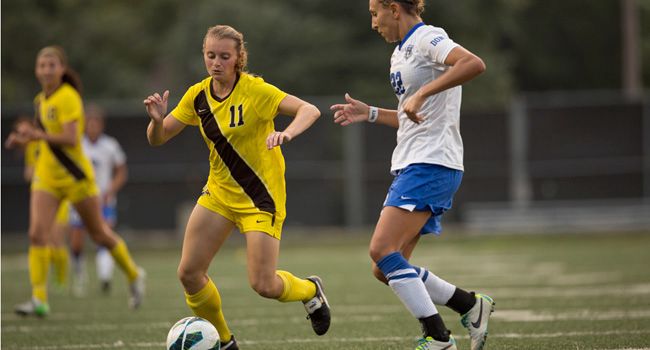 If it feels like the movie Groundhog Day when the Valparaiso women's soccer team takes the field in 2013, there's a good reason why - for the sixth time in as many games this season on Sunday, the Crusaders battled their opponents to a 1-0 decision, and for the fourth time, it was Valpo which came out victorious, finding the back of the net on a header in the 20th minute from senior Hailey Chmela (Hawthorn Woods, Ill./Lake Zurich).

While the game featured just one goal, both sides had solid opportunities to crack the scoreboard throughout the match. The Crusaders pushed early in the first half, earning a pair of corners in the first four minutes, but nothing came about of them.

IPFW then had perhaps its best scoring chance of the contest in the 18th minute, as when Valpo goalkeeper Kristen Manski (St. Charles, Ill./North) picked up a ball in the box that had been played back with the feet by a Crusader defender, the referee whistled the offence, which resulted in an indirect free kick just eight yards from the goal. Manski stood her ground and came up big, positioning herself perfectly to knock away the ensuing strike at goal and then easily corraling a follow-up attempt from the Mastodons to keep IPFW off the scoreboard.

With some energy following the successful stop, the Crusaders immediately went on the attack and capitalized less than two minutes later. A foul deep in its offensive end near the sideline gave Valpo what amounted to practically a corner kick. Senior Tara Ellis (Portage, Ind./Portage) took the free kick and sent it into the box, where it bounced once before Chmela got her head on it and sent it inside the far post to give the Crusaders the 1-0 advantage.

Valpo looked destined to put a second tally on the scoreboard for the first time this season in the 28th minute, but the woodwork denied the Crusaders, as Rita Craven (Frankfort, Ill./Lincoln-Way South) had her shot ricochet off the crossbar. Jordyn Ryfiak (Rockford, Mich./Rockford) was there for an attempt at the rebound, but her header was knocked behind for a corner kick, as the game eventually went to the break 1-nil to the Crusaders.

"I thought the first half, we weren't as sharp with our possession as we have been - we weren't connecting and we just off a little," said Crusader head coach John Marovich. "But our shape was good, and we were able to earn set pieces, one of which we scored on. Hailey did a fantastic job finishing her goal, and it was a well-deserved goal for her for the work she's put in over our last three games."

The first part of the second half saw the Crusaders keep pushing, looking for the insurance tally. Katriona Anesini (Seattle, Wash./Ballard) had an effort in the 48th minute slide left of goal, while Shelby Oelschlager (Glendale, Ariz./Mountain Ridge) saw a solid scoring chance denied by IPFW goalie Sam Pavlika in the 56th minute.

Then, in the 64th minute, freshman Morgan Manzke (Orland Park, Ill./Sandburg) had space to take a shot from the left-hand edge of the box and beat Pavlika with the strike, but it would sail just right of frame as it remained a 1-0 contest. IPFW had a pair of solid chances in the last 20 minutes, but couldn't make anything of either of them, as Mayson Whitman sent a shot high and Sydney Hoareau couldn't find the net from the right-hand side of the area, sending her effort left as the Crusaders completed the clean sheet.

"We put some fresher players, players who hadn't seen as much action out for the second half, and they did a tremendous job doing what we asked them to do," said Marovich. "We had some good looks at goal with that group, including a great shot at the back post by Morgan, who had a great performance today. We had some other solid chances too - from an attacking standpoint, we're starting to put things together, but it's a process, and going forward, we need to do a better job of finishing those chances, because I think we left some goals on the park tonight."

Both sides attempted 10 shots on Sunday, with IPFW (2-4-0) placing four on goal and the Crusaders ending with just two on goal despite their number of stellar chances. Pavlika stopped one shot for the Mastodons, while Manski made four saves to earn her fourth shutout of the year and the 26th of her career. It also marks the 19th straight match that Manski has not surrendered more than one goal. Valpo earned six corner kicks over the course of the match to just two for IPFW.

"At the end of the day, it's about winning, and our team won a great game today," said Marovich. "So many people stepped up for us - players who didn't have heavy minutes on Thursday were able to come in and help us keep a high intensity and high performance level. I'm really proud of our group right now."

Valparaiso (4-2-0) will spend a full weekend on the road for the first time this season next weekend, starting off with a Friday night contest at IUPUI. Kickoff is set for 6 p.m. CT, and live stats will be available through ValpoAthletics.com.