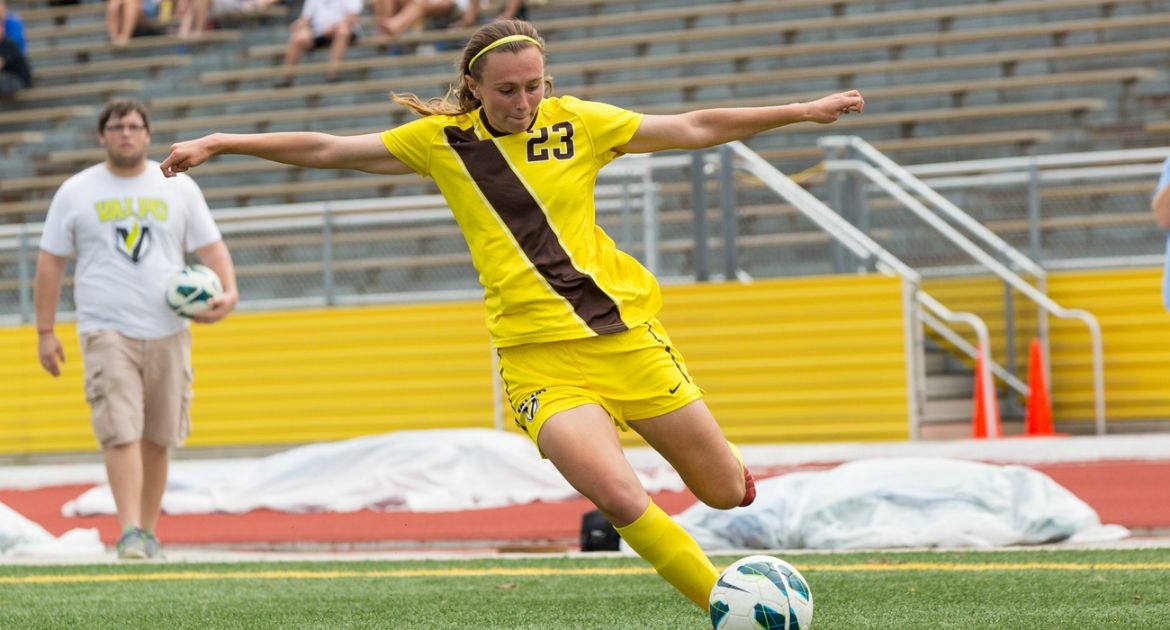 The Valparaiso University women’s soccer team jumped out on top by two goals Sunday afternoon in Bowling Green, Ky. in its last of five straight road matches to open the season, but a pair of weather delays sucked the momentum away from the Crusaders as WKU rallied with a pair of goals to force a 2-2 draw.

Just like they did on Friday at Belmont, the Crusaders came out aggressors on Sunday, and this time it paid off with an early goal in the 12th minute. Redshirt sophomore Morgan Manzke (Orland Park, Ill./Sandburg) played a ball into the right side of the box, where it fell into the path of senior Rita Craven (Frankfort, Ill./Lincoln-Way North), who punched it in for her third goal in as many games.

Valpo made it 2-0 less than five minutes out of the halftime break on an individual effort from junior April Cronin (Glenview, Ill./Glenbrook South). Cronin gained possession around the halfway line and took it herself, dribbling through the Hilltopper defense before firing a shot past WKU goalkeeper Allison Leone to make it 2-0 Valpo. For Cronin, it also marked her third goal in the last three games, and dating back to last season, the junior has now scored 12 goals in the Crusaders’ last 18 matches.

Just after the hour mark, the match went into a delay for lightning, and following the delay, WKU came out with a quick push, earning a penalty kick in the 62nd minute which Iris Dunn knocked home to cut the Crusader lead in half. Another lightning delay ensued just past the halfway point of the second half, and again the Hilltoppers got a goal shortly after resumption, this time tallying as Chandler Clark headed home a corner kick in the 74th minute. Valpo would tally eight shot attempts after WKU registered the equalizer, most notably a penalty kick that hit the post in the 87th minute, but could not find the back of the net.

"I thought we had a great start to the match and that we put some good chances together," said Crusader head coach John Marovich. "We had a solid 62 minutes, and then the two delays came into play. You have to learn to deal with those things, but we just weren't as sharp after the two delays as we were before. After the game was tied, I thought we got some chances, but just didn't put them away."

Valpo held a narrow 17-15 edge in shots over Western Kentucky (2-2-1) on Sunday, with both sides putting seven attempts on goal. Both Leone and Crusader goalkeeper Sydney Galvez-Daley (Chicago, Ill./Fenwick [Creighton]) made five saves on Sunday afternoon.

Valparaiso (2-2-1) returns home for the first time in the regular season Friday evening, opening a four-match homestand against Eastern Washington at Brown Field at 7:30 p.m. Live stats will be available via ValpoAthletics.com.