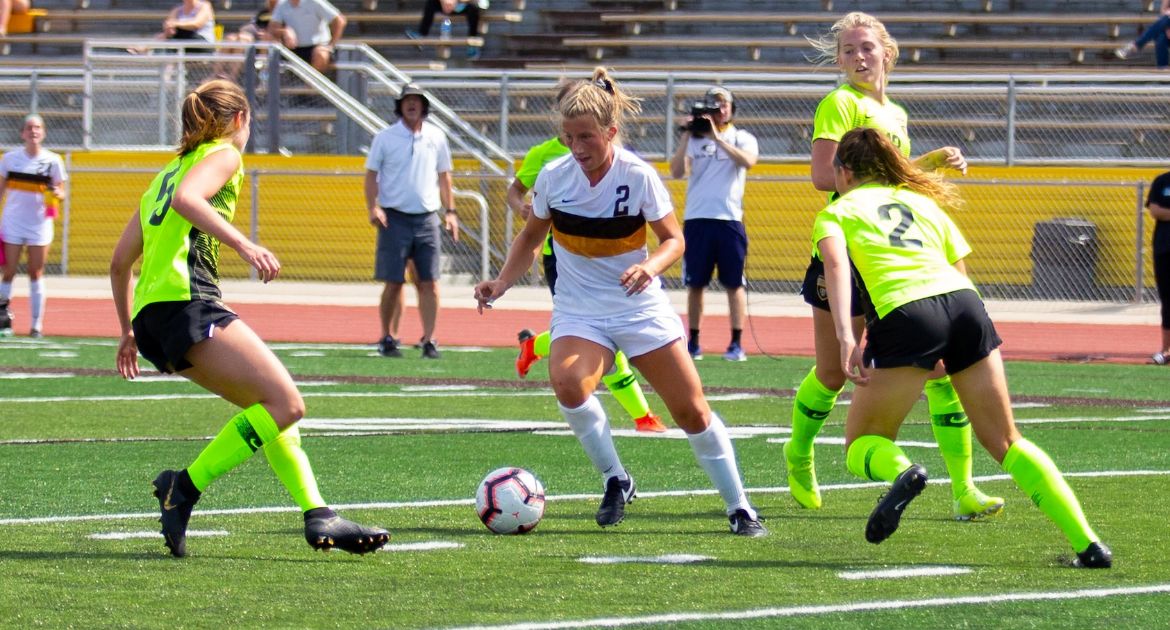 This Week in Valpo Soccer: The Valpo women’s soccer team continues early-season action with its first road trip of the regular season Friday evening, heading to Bowling Green. The Brown and Gold then returns home for a Sunday afternoon match against Wright State.

Previously: A pair of one-goal decisions went against Valpo in the opening weekend of action, as it fell to Green Bay and Oakland at Brown Field by identical 1-0 finals. It was a young lineup running out for Valpo on opening weekend, featuring five true freshmen.

Looking Ahead: Western New York is on the docket next weekend, as Valpo hits the Empire State to take on St. Bonaventure Friday night, Sept. 6 and Canisius Sunday afternoon, Sept. 8.

Following the Brown and Gold: Sunday’s home match will be broadcast live via The Valley on ESPN and carried on ESPN+. In all, seven of Valpo’s eight home matches this year will be broadcast on The Valley on ESPN. Friday’s match at BGSU will have a free video stream via YouTube. Live stats will be available as well for both matches, with links for all the live coverage available via ValpoAthletics.com.

Head Coach John Marovich: In his 12th season at the helm of the Brown and Gold, John Marovich holds a 96-82-30 (.534) record both overall and at Valpo as a head coach. The 2014 Horizon League Coach of the Year, Marovich holds Valpo’s all-time records for both victories and winning percentage.

Series Notes: Bowling Green - Valpo trails the all-time series against the Falcons 2-4-1, and BGSU won the last full-time matchup between the two sides, 1-0 on Aug. 21, 2016 in Bowling Green. Notably, weather has reared its head multiple times over the course of the series - last season saw the matchup at Brown Field called after 38 minutes due to thunderstorms, while the scheduled fixture in 2003 never even reached kickoff thanks to storms. Valpo’s 3-0 win over BGSU at Eastgate Field in 2012 also featured a 56-minute halftime delay due to lightning.

Wright State - The Raiders hold an 11-2-4 advantage in the all-time series over Valpo and have won the last three matchups, including a 3-0 decision in their last meeting as Horizon League foes in Dayton on Sept. 8, 2017. The Brown and Gold have battled WSU to a draw in each of the last three matchups contested in Valpo, however.

As Young As It Gets: Valpo featured five true freshmen in its season-opening starting XI on Friday: goalkeeper Georgia Henkel, defender Nicole Norfolk, midfielder Natalie Graf, and forwards Kiley Dugan and Madison Tuma. Five freshmen starters mark the most for a Valpo women’s soccer team in a season opener since at least 1998. Henkel’s start in goal was the first by a freshman goalkeeper in a season opener since 2015.

Tending the Goal: Henkel had a solid start to her career in goal on opening weekend, surrendering just one goal apiece in the two games while taking a pair of tough-luck losses. Her 1.00 GAA was the best among MVC goalkeepers through the first weekend of action, while her .714 save percentage ranked third.

Iron Woman: Senior defender Ali Quillen played the full 90 minutes of both matches opening weekend, but that’s nothing new for the stalwart in the back. Quillen went the distance for the 51st and 52nd times in 56 career starts. Quillen’s consecutive minutes played streak is now up to 2,325 minutes, dating back to Sept. 28, 2017.

Quillen compares favorably to a pair of Valpo defenders with similar durability and reliability over the past decade. Janine Lytle (2009-12) went the distance in 73 of 77 career matches and sat on the bench for just 31 minutes total over her four years, playing a total of 7,204 minutes. Lytle’s longest stretch of consecutive minutes played spanned her freshman and sophomore years and reached 2,690 minutes.

Quillen still has a ways to go to catch the consecutive minutes played mark of Tracy Roos (2008-11). Roos, who went the distance in 69 of 77 career matches, had a stretch of 3,413 coneutive minutes played which spanned from her sophomore year through her senior year.