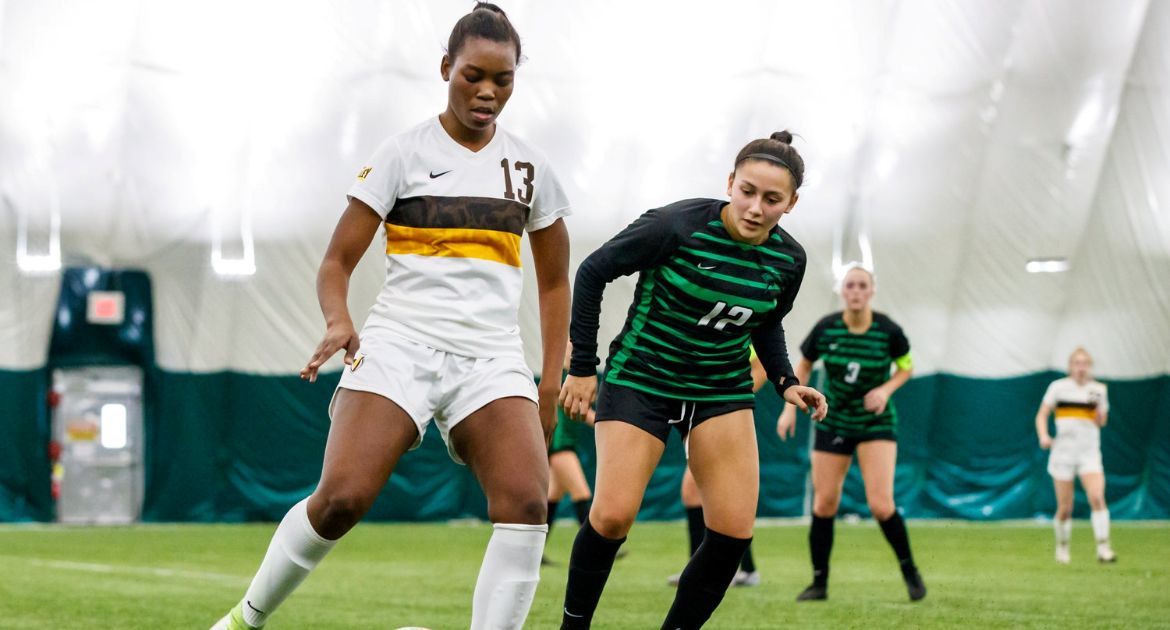 Returning to intercollegiate competition for the first time since November 2019, the Valpo women’s soccer team got the spring 2021 season started on the right foot on Wednesday afternoon at Sparta Dome in Crown Point, scoring the fastest goal to open a season in program history on its way to a 2-1 victory over Chicago State.

“It was great to get back on the pitch for the first time in 15 months. I was so proud of the team for how they reacted to all the moments in the match. We hit the mark on how we wanted to play today from a defending and pressing standpoint.”

“It was great to see the team get rewarded for their hard work with two goals in the first half.  We had lots of positives today, but also some things that we need to get on the training ground and work through. The way we handled difficult situations late in the game to see out the match shows how strong our mental game has come over the pandemic break.”

Thoughts From the Players

Keegan Maris, on her first game in two and a half years: “It’s so meaningful, after all this time away from competitive matches, to just be back on the field and competing with my best friends.”

Kiley Dugan, on her performance today: “I have gained so much confidence over the break which allows me to be more involved in possession, and I feel like I am making a bigger contribution to the team.”

Kelsie James, on her first collegiate goal: “It was an incredible feeling - I have been waiting so long to play for this program, and to be able to contribute to the win with my first goal means everything to help my team get a win.”

Tahelah Noel, on her penalty kick: “I knew the importance of the second goal would be huge. I just calmed down and didn't think much about it, I relied on the practice I've put in on them.”

Kiera Pratt: “I'm so impressed with the improvements the team has made. Our work this fall was super influential to our development today.”

Lauren Torhorst: “We had a plan coming into today, and we executed it - we were composed throughout the game. Our freshmen have really bought into our program and were a big part of today's result.”

Valpo (1-0-0) will return to action next Wednesday with a neutral-site matchup against UNI in Rockford, Ill. Kickoff that day is slated for 1 p.m.