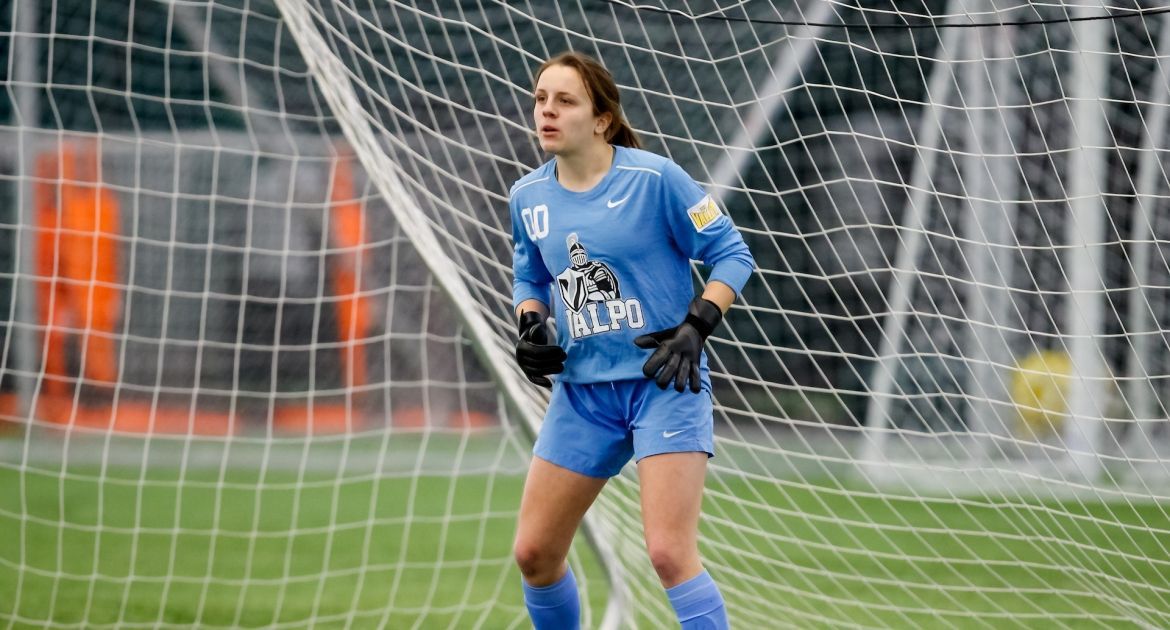 It might have been a non-conference matchup on the schedule, but the struggle for control in Wednesday’s women’s soccer match between Valpo and UNI felt like an MVC battle. In the end, neither side yielded as the fixture — played at the Indoor Sports Center at Mercyhealth Sportscore Two in Loves Park, Ill. — ended in a 0-0 draw in double overtime. Freshman goalkeeper Nikki Coryell (Aurora, Ill./Metea Valley) made five saves to preserve the clean sheet, her first career shutout.

“I'm really proud of our players and happy with their performance today as they're finding their legs again. Coming off of a long break, to be able to get a win in our first match and then another result with a tie today is a great way to start off the spring season — it shows a lot of grit. I’m really enjoying working with this group — despite everything else that’s going on, when they get to practice, they are totally engaged in getting better as a unit, and I think you’re seeing that engagement paying off in our first two games.”

“I've felt like we have come out on the front foot in both our games so far. We had a good rhythm to our performance in the first 45 minutes today, and I thought we did a lot of really positive things in the first half.”

“In the second half, we got a bit stretched — UNI came out and challenged us in a little bit of a different way. But that gave us an opportunity to grow as a unit. I felt like when we got stretched today, we handled those situations with more composure today than we did last Wednesday, which shows that we're learning from our experiences.”

“We had some really good individual performances today. Cassidy Eckstein came off the bench and played really well in the central midfield. I thought Kiley Dugan did a great job for us, and it was great to have Kiera Pratt play a full match for the first time in her career as well. All in all, every person who came in contributed, and that shows a lot of great character within this group. We're looking forward to getting back on the field and training for our next match.”

Valpo (1-0-1) closes its truncated non-conference campaign on Monday afternoon at the Sparta Dome in Crown Point as it hosts DePaul at 1 p.m. Live stats will be available at ValpoAthletics.com.