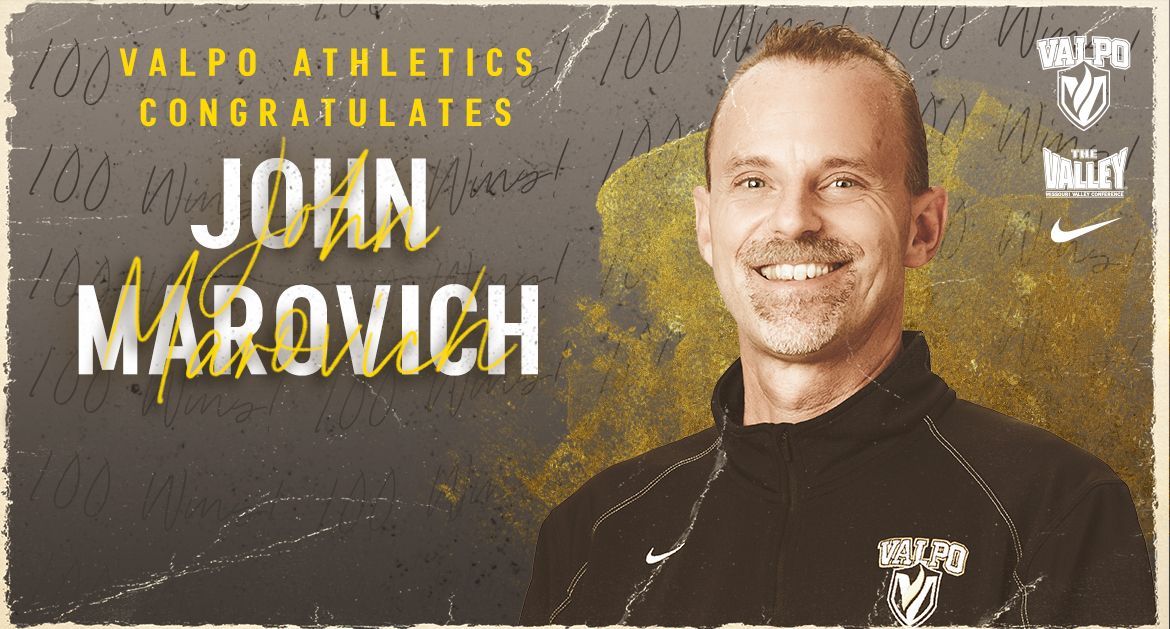 Playing its first home match at Brown Field this year, the Valpo soccer team made it one to remember Tuesday afternoon, as goals within a few minutes of either side of halftime stood up for a 2-0 victory in MVC play over Indiana State. The win was commemorated by a shower from the water jug as the final horn sounded, as head coach John Marovich led the Brown and Gold to their 100th victory in his tenure on the sidelines leading the program.

“I’d like to thank every single player who has ever played at Valpo, both during my time here and before my time. It’s an honor and privilege to represent all of them as coach of this program. Everybody who has given their time, talent, energy and effort to be a part of the 100 wins is truly special to me. I’m moved by it all, from the ice bath to the postgame video and people who took the time to send messages. I’m humbled by the moment and want everyone to know how appreciative I am of what they’ve done to help this program become what it is today.”

“I felt like today, we got a little bit stretched in the opening 15 minutes. It’s not necessarily what I think is great for us, but I thought we did a good job after that of starting to compact our defense, which allowed us to have better possession and purpose.”

“The group’s performance today was a really good way to come out and protect our home field. They battled, they showed a lot of grit and had a lot of really positive moments. Players came off the bench to combine for our first goal, and it was great to see Lindsey get her first collegiate goal to make it 2-0.”

“Some of our older players really set a great example during training over the past few days for our younger players on how to be dangerous on the attack and taking on defenders on the flank, and that really made an impact on Lindsey and paid off with how she scored her goal. It’s just another example of how this group is helping each other grow, and that's what I’m going to take away from the game.”

“We got the three points and kept the clean sheet in a conference game — we’ll enjoy this tonight and then start to get to work for Loyola on Saturday. Every game is a new opportunity to test us and to challenge us, and this group looks forward to each of those chances.”

Valpo (2-1-2, 1-0-1 MVC) returns to Brown Field on Saturday afternoon at 1 p.m. to host MVC preseason favorite Loyola. The match will be broadcast live on ESPN3.