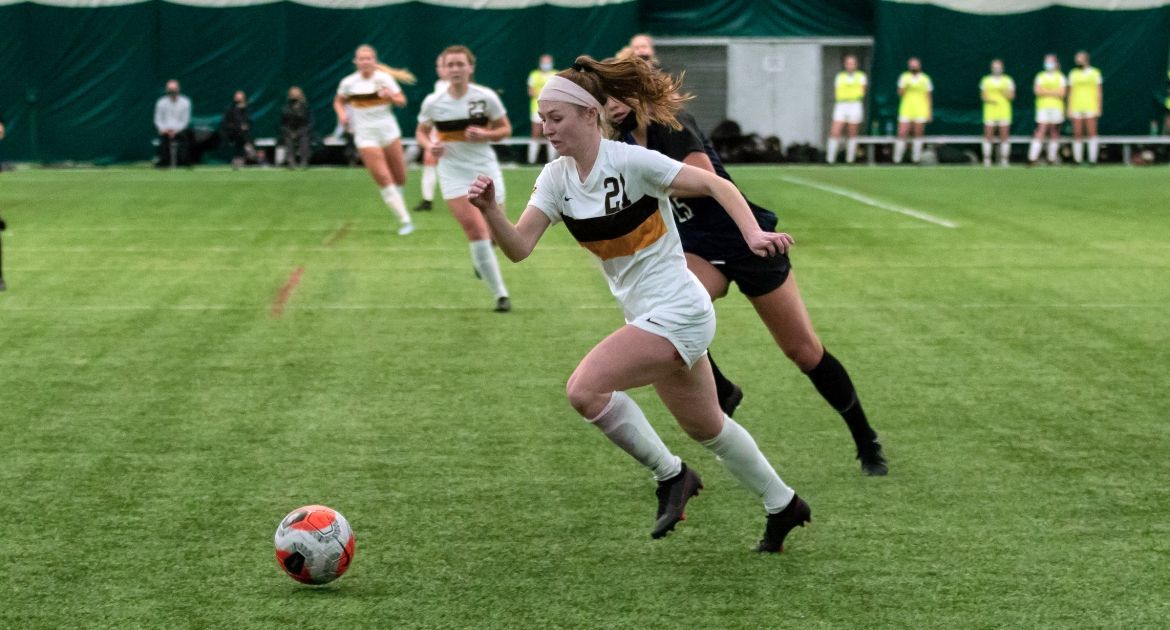 Next Up in Valpo Soccer: The Valpo soccer team faces a pair of MVC matches this week at Brown Field, hosting Indiana State on Tuesday and Loyola on Saturday.

Previously: Valpo opened MVC play with a positive result, claiming a draw in a scoreless battle at Southern Illinois on Feb. 28.

Next Up: Valpo closes its three-match homestand on Friday, March 19 when it hosts Drake at 6 p.m.

Following the Brown and Gold: Both of this week’s matches are slated for broadcast on ESPN+, and both will have live stats available via ValpoAthletics.com as well.

Head Coach John Marovich: In his 13th season at the helm of the Brown and Gold, John Marovich holds a 99-96-33 (.507) record both overall and at Valpo as a head coach. The 2014 Horizon League Coach of the Year, Marovich holds Valpo’s all-time records for both victories and winning percentage.

Series Notes: Indiana State - Valpo owns a 9-3-2 advantage in the all-time series. The Brown and Gold had earned nine results in a row (7-0-2) before the Sycamores won 3-2 in October 2019 in the last meeting.

Loyola - The Ramblers hold an 18-9-1 advantage in the all-time series and have won the last three matches since Valpo won 2-1 in October 2017 in their first meeting as MVC opponents.

Scouting the Opposition: Indiana State - The Sycamores are 2-1-0 so far this year and have won both of their MVC matches, including most recently a 1-0 win at home over Southern Illinois. Each of their two MVC wins to date have come by 1-0 finals, with both decisive goals coming in the final 20 minutes.

Loyola - The Ramblers enter the week at 1-0-1 both overall and in MVC play, having drawn with Missouri State and defeated Drake. Loyola will face UNI in mid-week action before Saturday’s fixture. Olivia Knab and Freya Glen own the Ramblers’ two goals this year, while Maddie Hausmann has already kept a pair of clean sheets in net.

Two Weeks, Two Awards: Freshman forward Kelsie James kicked off her career in the Brown and Gold with a bang, earning MVC Freshman of the Week honors in each of the season’s first two weeks. She made an immediate impact in her debut, scoring less than seven minutes into Valpo’s season-opening win over Chicago State. The goal, which came at the 6:53 mark, was the fastest goal to open a season in program history. James then notched her second goal of the season in her third career match, slotting home a penalty against DePaul in the 85th minute which equalized the match at that point, 1-1. James also drew the foul which led to the penalty kick. James is the first Valpo freshman to score twice in her rookie season’s first three matches since Sarah Jewell found the back of the net twice in the first three fixtures of the 2006 campaign. Prior to this year, Valpo had just one Newcomer/Freshman of the Week honoree in its first three seasons in the MVC.

Coryell Holds Her Line: Freshman goalkeeper Nikki Coryell was honored as the MVC Defensive Player of the Week Feb. 23, earning the accolade after posting her first career clean sheet in a non-conference matchup against UNI, making five saves to secure the shutout against the Panthers. She made five saves as well in a one-goal loss to DePaul to close non-conference play, facing a Blue Demons squad which was selected second in the Big East Midwest Division preseason poll. Coryell then posted a shutout as well in the MVC opener against Southern Illinois, making two saves to keep that clean sheet.

Maris Returns to Action: While everyone on the roster was eager to return to action, maybe no player was more ready to kick off the season than Keegan Maris. Maris, who missed most of the 2018 season and all of 2019 due to injury, returned to Valpo’s lineup in the season-opening win over Chicago State, playing all 90 minutes at left back in her first match in 885 days. Maris helped limit CSU to just four shots on goal in the win and was named the first MVC Defensive Player of the Week of the season for her role in the victory. Maris has played all 400 minutes at left back over Valpo’s first four matches.

Starting Streaks: Dugan and Norfolk both started all 18 matches a season ago and have been part of the starting XI in each of this season’s first four matches to extend their starting streaks to 22 straight matches.

Iron Woman: Norfolk is quickly joining the ranks of Valpo backs who have played almost every minute of their careers. The sophomore played all 1,659 minutes during her rookie year and has not come off the pitch yet this year, extending her consecutive minutes played streak to 2,069 minutes.