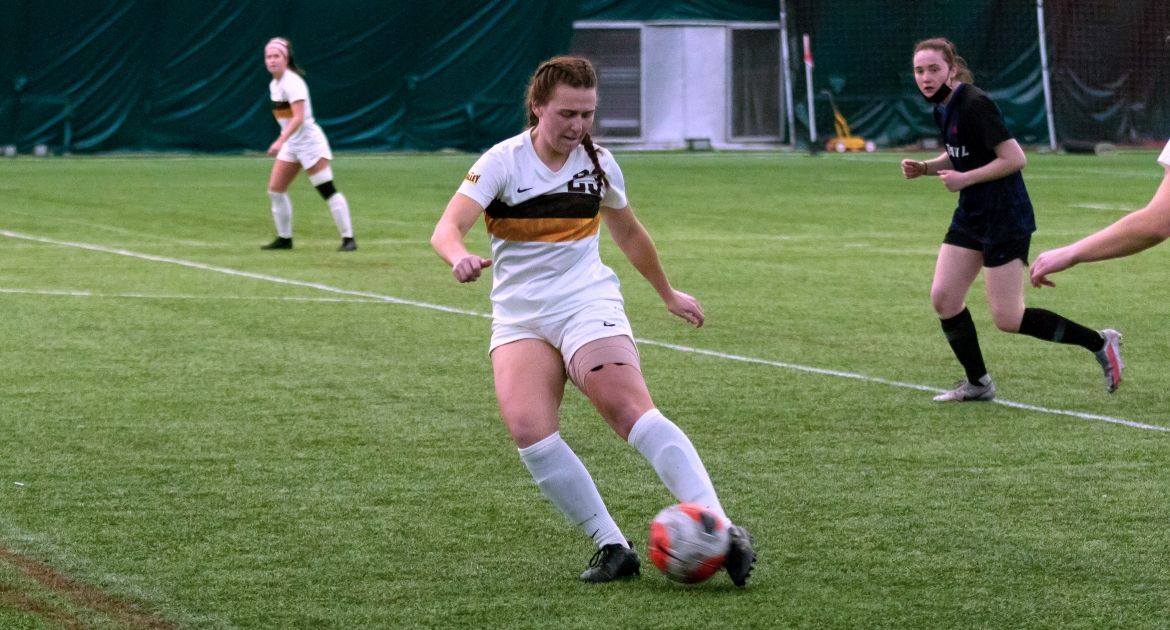 Next Up in Valpo Soccer: With the regular season winding down and conference tournament spots on the line, the Valpo soccer team faces its final two matches of the schedule in a five-day span. The Brown and Gold will host Missouri State on Brown Field on Saturday afternoon at noon for the program’s Senior Day match before closing out the regular season next Wednesday, April 7 at Illinois State.

Previously: Making a pair of road trips within five days after not facing a road trip for nearly a month, Valpo battled to a scoreless draw at Evansville March 24 before falling 1-0 at UNI March 28.

Next Up: The top six teams in the final regular season standings (determined by points per match this year) will qualify for the MVC Tournament.

Following the Brown and Gold: Saturday’s match versus Missouri State is slated for broadcast on ESPN3, while the match at Illinois State is scheduled to be broadcast on ESPN+. Links for the live video for both matches, as well as live stats, will be available via ValpoAthletics.com.

Head Coach John Marovich: In his 13th season at the helm of the Brown and Gold, John Marovich holds a 100-98-35 (.504) record both overall and at Valpo as a head coach. The 2014 Horizon League Coach of the Year, Marovich holds Valpo’s all-time records for both victories and winning percentage.

Series Notes: Missouri State - The Bears hold a 4-1-1 advantage in the all-time series against Valpo, but the two sides are 1-1-1 against each other since Valpo joined the MVC. In the last meeting in September 2019, Missouri State earned a 2-1 victory in Springfield.

Illinois State - The Redbirds are 7-1-0 against the Brown and Gold, but Valpo’s one win in the series came in the two sides’ last meeting in Normal - a 2-0 victory in October 2018. The last matchup between the programs came in Valpo in October 2019, a 1-0 Illinois State win.

Scouting the Opposition: Missouri State - The Bears enter Saturday’s match 3-6-2 overall this year and 1-3-1 in MVC play following their win over Drake on Wednesday. Eight different MSU players have scored the team’s eight goals this season, while two-time MVC Goalkeeper of the Year Kaitlin Maxwell has recently returned from injury and posted a clean sheet against the Bulldogs.

Illinois State - The Redbirds currently sit at 3-5-0 overall and 3-3-0 in MVC play, with a contest at Southern Illinois prior to the season-ending matchup. Abby Basler has scored four of Illinois State’s 11 goals and Ashley Santos has found the back of the net three times. In goal, Priya Gillan has seen all but 45 minutes of action, posting a 1.60 GAA and a .613 save percentage.

What’s Back and What’s New: Valpo returns 15 letterwinners from last year’s team for the spring 2021 campaign, including all of its goalscorers from last season and eight starters in all. Joining that group is a set of 10 freshmen ready for their first season of collegiate soccer

Celebrating the Seniors: Valpo will honor a quartet of seniors prior to Saturday’s home finale against Missouri State - Lauren Torhorst, Tahelah Noel, Keegan Maris and Kiera Pratt. While the program’s Senior Day has traditionally been the team’s last regular season non-conference home weekend match in the recent past, due to the nature of this season, they are holding it on the final home match of the regular season. Valpo owns a 6-1-0 record on Senior Day over the past seven seasons.

Coryell Keeps Making Saves: Freshman goalkeeper Nikki Coryell continued the strong start to her collegiate career last week, posting a clean sheet at Evansville and surrendering just one goal at UNI while stopping penalty kicks in both matches. The MVC Defensive Player of the Week Feb. 23, Coryell currently owns a 0.61 GAA and an .854 save percentage with four shutouts. She has surrendered one goal or fewer in eight of nine matches this season.

Reaching a Milestone: The win over Indiana State was a milestone victory for head coach John Marovich, who earned his 100th win as head coach of the Brown and Gold with the victory over the Sycamores. He became the first Valpo soccer coach - men’s or women’s - in history to reach triple digits in victories on the sidelines. Marovich now owns a career record of 100-98-35 in his 13th season at the helm of the Valpo program, and he was a pair of 52 wins over six seasons as an assistant/associate head coach as well before becoming head coach. Marovich is one of three MVC coaches with 100 or more wins as head coach at their current school (Lindsey Horner, Drake; Rob Brewer-MSU).

The Youth of the Side: One-third of Valpo’s minutes played this year have come from freshmen, and six rookies have combined to make 31 starts so far this year. Underclassmen account for 59.5% of minutes played this season and have earned 59 of 99 starting nods. Of the 13 players who have seen 400 minutes or more of action, five are freshmen and three are sophomores.

Starting Streaks: Four players have been a part of the starting XI in all nine matches to date this year: senior Keegan Maris, sophomores Kiley Dugan and Nicole Norfolk and freshman Nikki Coryell. Dugan and Norfolk both started all 18 matches a season ago as well and enter Saturday with starting streaks of 27 straight matches.

Iron Woman: Norfolk is quickly joining the ranks of Valpo backs who have played almost every minute of their careers. The sophomore played all 1,659 minutes during her rookie year and has not come off the pitch yet this year, extending her consecutive minutes played streak to 2,549 minutes. Maris has also played all 890 minutes so far this year in the field, and Coryell has seen all the action at goalkeeper as well.