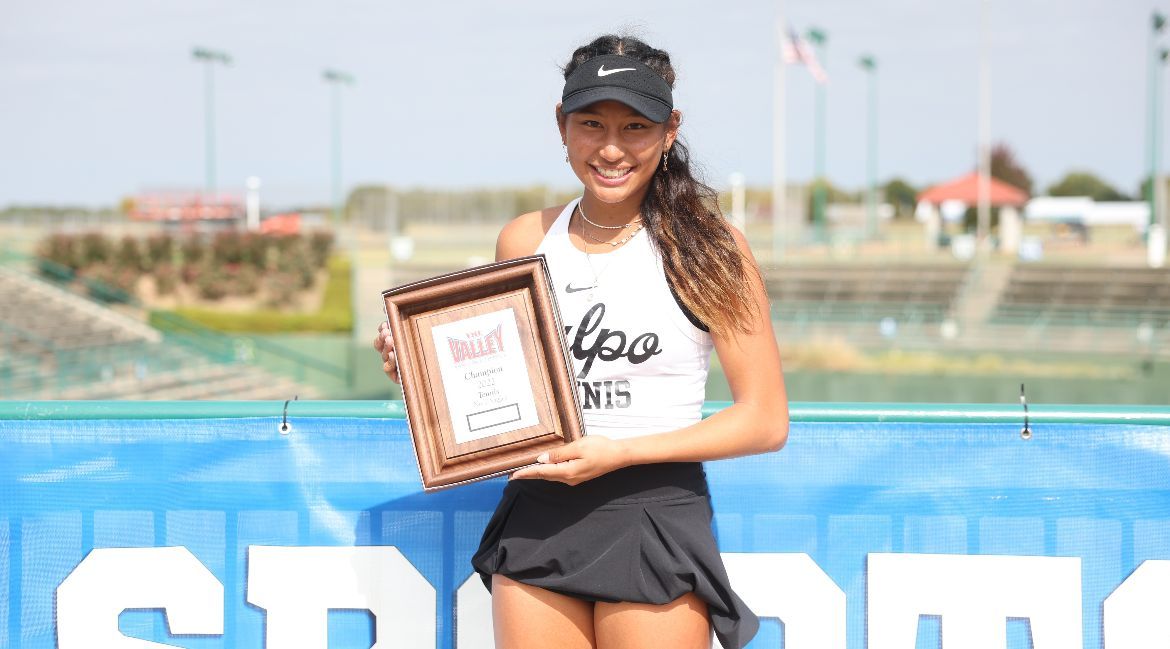 With her collegiate career not even two months old, the Valparaiso University tennis freshman is a conference champion. She earned Flight 2 Singles hardware on Sunday at the MVC Individual Championship in Springfield, Mo., rolling to a straight-set win over Bradley’s Mariia Pukhina 6-4, 6-0 in the title match.

“I was able to do it because of my teammates and coaches,” Silva said. “My coaches helped me get to where I am, and my teammates were all there cheering me on. This was the first tournament where I actually didn’t feel nervous at all and that’s because I knew I had a team supporting me no matter what. This wasn’t just a win for me, this was a win for everyone.”

Silva went 4-0 this weekend, beating players from Missouri State, UIC, Illinois State and Bradley en route to the title. That advanced her season singles record to a flawless 9-0. She did not drop a set in any of her four matches in Missouri.

“Winning a conference championship is even better when you add teams like Belmont, Murray State and UIC, three very formidable opponents,” head coach Bob Modesto said. “That really bodes well for the program and gives us great hope for the spring season. In addition, we’re looking forward to the ITA Regional. It’s phenomenal when you can add Moira to the mix with Olivia (Czerwonka); that really fires you up. We’re continuing to build on the success from last year; it’s been a great fall.”

“One of the comments that I made to the Bradley coach is that playing Moira is like playing Rafael Nadal,” Modesto said. “She makes you earn every point. She is grinding out points, getting to the ball that nobody expects her to get to. The Bradley coach said every one of your team members does that same thing, and that says a lot about our team.”

Czerwonka also earned a victory on Sunday, her second straight win after a tight setback against a quality opponent in Friday’s Flight 1 Singles opener. Czerwonka earned fifth-place in the flight by virtue of Sunday’s 6-3, 7-6(6) triumph over Murray State’s Annika Pschorr. That win allowed Czerwonka to advance her career singles total to 53, putting her all alone in sixth place in program history. As a tandem, Czerwonka and Silva fell to a Bradley duo 8-4 in the third-place match of Flight 1 Doubles, finishing in fourth place in the event.

The Beacons will compete in the ITA Midwest Regional, beginning on Oct. 20 in Ann Arbor, Mich.