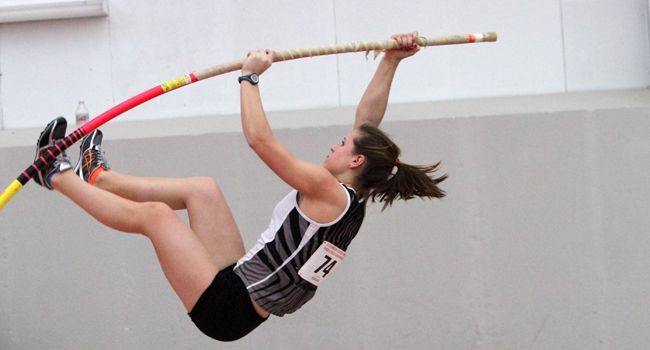 Sophomore Kelley Freeman (Valparaiso, Ind./Chesterton) smashed the Valparaiso women's track and field outdoor record in the pole vault by six inches on Saturday, highlighting a day which saw the Crusaders win six events en route to a fourth-place finish at the DePauw Invitational in Greencastle, Ind.

The Crusaders tallied 94.5 points on the day, good for fourth place out of the eight competing schools. Saint Joseph's took home top team honors with 173.5 points.

Freeman passed on her attempts on the pole vault up to 10'4”, which she cleared on her first effort. She also successfully cleared 10'10” on her first attempt, matching her outdoor PR from her freshman year. Faced next with a height of 11'3 3/4”, the sophomore needed two tries before successfully clearing the bar, matching Amanda Meyer's program outdoor record in the event. Freeman then guaranteed the record would be hers alone, clearing 11'9 3/4” on her first effort as well before finally failing to surpass 12'3 1/2”.

Freeman's win in the pole vault was one of four on the infield for Valpo on Saturday, with the other three coming courtesy of sophomore Sarah Drozdowski (Roselle, Ill./Lake Park). Drozdowski smashed her previous outdoor PR in the hammer throw by nearly five feet in winning the event with a mark of 165'0”, improving upon the second-best mark in Crusader history. The sophomore also took top honors in the javelin throw (107'1”) and shot put (41'7 1/4”) and placed sixth in the discus throw (116'2”), while freshman Jazmin Taylor (Rock Island, Ill./Rock Island) registered a sixth-place finish in the high jump with a leap of 4'7”.

The Crusaders also boasted a pair of victories on the track at DePauw. Freshman Kelli Wosick (Mount Prospect, Ill./Saint Viator) cracked Valpo's all-time top-five in the 400m dash, crossing the line in 1:00.44, the fifth-fastest time in the event in Valpo history. Sophomore Nicole Zehel (Wixom, Mich./Lutheran Westland) earned top honors in the 3,000m steeplechase, covering the course with a time of 11:49.76.

Elsewhere on the track, sophomore Claire Johnson (Eden Prairie, Minn./Eden Prairie) completed the 1,500m run in 5:00.15, good for fifth place, while sophomore Grace Watkins (Hanover Park, Ill./Hoffman Estates) came home in sixth place in the 5,000m run. Sophomore Marissa Crafton (Chesterton, Ind./Chesterton) showcased her versatility on Saturday, placing fourth in both the 100m (13.13) and 200m (27.44) dashes and moving into third in Crusader history in the long jump with a leap of 17'4 1/4”, good for a runner-up finish.