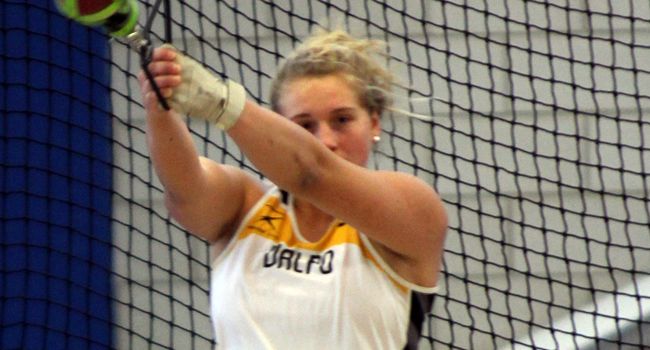 The Valparaiso women’s track and field team kicked off the 2013-2014 indoor season on Saturday at the Mastodon Opener in Fort Wayne, Ind.

Sarah Peters moved up on Valpo’s all-time chart in the pole vault, clearing 10 ’11 1/2", which is the fourth-best effort in Crusader history in the indoor event. With the effort, Peters placed second in the event. Elsewhere in throws, Sarah Drozdowski threw for a mark of 55’9” in the weight throw for a second place finish in the event. Drozdowski’s throw was good for third-best in Crusader history for the indoor event. Megan Howdeshell took sixth place in the event with a throw of 50’1”.

On the track, Kelli Wosick took a top-ten finish in the 600m run with a time of 1:42.82, a time good for third best on the Crusader’s all-time chart. Nicole Zehel also ran her way into the top-ten in the 800m, finishing seventh with a time of 2:26.54

The Crusader women are not scheduled to compete again until after the holiday break. Once back, Valparaiso will travel to Hillsdale Mich. to compete at Hillsdale College on Saturday, January 11th.