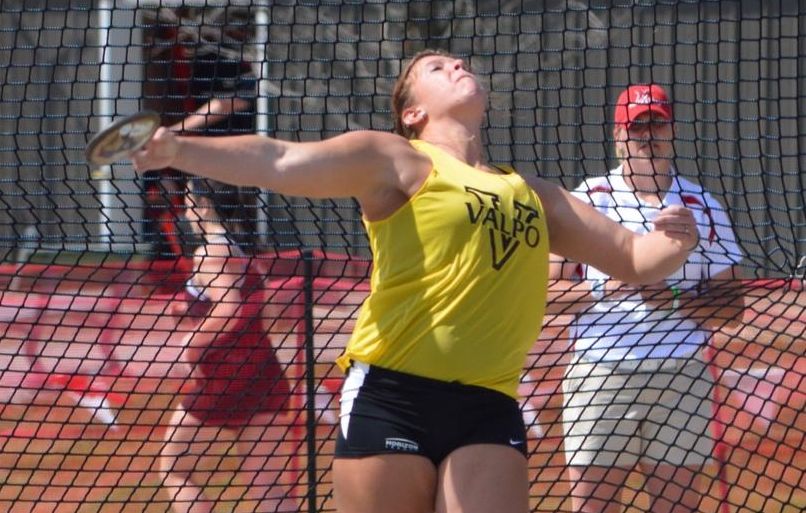 At the first day of the Horizon League Outdoor Championships in Youngstown, Ohio, senior Megan Howdeshell (Bourbon, Ind./Triton Junior-Senior) was crowned champion in the discus. Howdeshell’s performance helped to put Valparaiso in second-place after the first day of events.

Howdeshell was far-and-away the champion in the discus, out-throwing the runner-up by nearly four feet with a mark of 144’5”. The first-place effort was the second-best mark in program history, and the best mark in the league this season. Erica Funk took seventh in the discus with a personal season-best mark of 132’9”.

Brooke Hinstorff (Waterloo, Wis./Lakeside Lutheran) and Heather Mende (St. Charles, Ill.) finished third and fourth in javelin. Hinstorff’s mark of 101’6” was good for third-place, while Mende’s distance of 100’10” put her in fourth.

Jessica Richardson (Columbus, Ind./North) finished third in the 10,000-meter run, crossing the finish line in 36:46.01 – both a personal best and a second-best time in program history.

After day one of competition, the Crusaders sit in second-place with 26 total points; just four points behind Youngstown State who leads to the competition. Action at Farmers National Bank Field resumes tomorrow with day two of the Horizon League Outdoor Championships. Both live video and live stats will be available through ValpoAthletics.com.