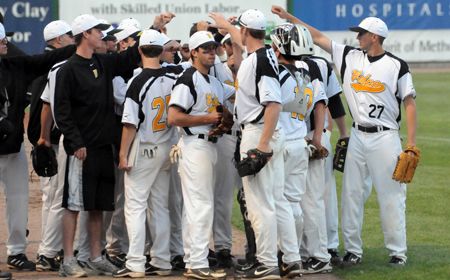 The Crusaders will take the mound for the first time in 2011 on Friday. (Ray Acevedo)
Related Links

This Week in Crusader Baseball: Valparaiso opens the 2011 baseball season with a three-game weekend set at Austin Peay.  The Crusaders look to get off to a quick start on the road, as the Brown and Gold will be away from home for 23 straight games to open the year.

Head Coach Tracy Woodson: Tracy Woodson, the 16th head coach in Valparaiso University history, is in his fifth season at the helm of the Crusaders and has a 95-125 (.432) record both for his career as well as at Valpo.  Woodson ranks fourth in school history for career wins by a head coach.  A member of the Los Angeles Dodgers 1988 World Champion team, he has also managed in the minor leagues through the AAA level.

Series Notes: Austin Peay leads the all-time series against the Crusaders 14-5 dating back to 1982.  The two schools have not met since 2008 when the two schools split the opening four games of the season.  Valpo went 2-1 in Clarksville, Tenn. in the season-opening series before the Governors won a single contest a week later to open the APSU tournament.

Wrapping Up Last Year’s Action: Valparaiso finished 2010 with a 24-32 record overall and a 9-10 mark in the Horizon League.  The Crusaders finished the year fourth in the conference during the regular season, and placed third in the postseason tournament hosted by Valpo at U. S. Steel Yard in Gary, Ind.  Ryan O’Gara led the Crusaders with a .388 batting average and six home runs while Kyle Gaedele batted .373 with seven homers and 63 runs batted in.  As a team Valpo hit .314 offensively with 29 homers and scored 407 runs on the year.  Bryce Shafer led the pitching staff with a 7-4 record and a 4.10 earned run average on his way to being named Horizon League Pitcher of the Year.  He has since been drafted by the Chicago Cubs and is in their minor league system.

Scouting Austin Peay: The Governors finished 2010 with a 28-25 record overall and an 8-13 mark in the Ohio Valley Conference.  Austin Peay has been picked to finish seventh in the OVC this season.  Jon Clinard is the Governors top returning hitter after batting .333 with 30 runs batted in a year ago.  He was named to the OVC’s preseason team this year.  As a team Austin Peay batted .304 on the season in 2010 while the pitching staff notched a 6.68 earned run average.

Valpo in Recent Openers: Last year the Crusaders were swept in a three-game series at McNeese State to open the year.  The opening day loss ended a string of back-to-back season-opening victories for the Brown and Gold.  Valpo swept a two-game series at Morehead State to open 2009 while downing Austin Peay in two of three, including the season opener in 2008.  Prior to 2008, the Crusaders had lost 10 straight season openers.

Keep the Bags Packed: Valpo will play its first 23 games away from home before finally returning to Emory G. Bauer Field on April 1 to UIC.  Valpo’s travel has the Crusaders heading west after this weekend to play four games at Cal State Northridge, two at Cal State Bakersfield, three at Cal Poly, and four at UNLV as part of the spring trip.  The Crusaders then return to the Midwest March 18 for seven more games prior to the home opener, including the Horizon League opener at Butler March 25-26.

This and That: Valpo has 12 new faces on the roster this season, including eight freshmen ... Kyle Gaedele enters the season having reached base safely in 11 straight games ... Will Hagel enters 2011 with the team’s longest active hitting streak, seven games.