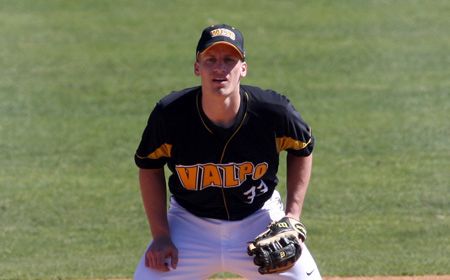 This Week in Crusader Baseball: Valparaiso opens Horizon League action this weekend while nearing the end of a 23-game road trip to begin the 2011 season.  The Crusaders head to Indianapolis for a three-game set with longtime rival Butler.  The series begins with a single game on Friday before the two schools meet again on Saturday for a twinbill.

On the Air: There will be no live broadcasts of any of the three games this weekend.  Live stats will be available through www.valpoathletics.com for each game.

Head Coach Tracy Woodson: Tracy Woodson, the 16th head coach in Valparaiso University history, is in his fifth season at the helm of the Crusaders and has a 97-142 (.406) record both for his career as well as at Valpo.  Woodson ranks fourth in school history for career wins by a head coach.  A member of the Los Angeles Dodgers 1988 World Champion team, he has also managed in the minor leagues through the AAA level.

Series Notes: Valparaiso leads the all-time series with Butler 71-48-1 dating back to 1952.  Last season, the Crusaders split four games with Butler.  The Bulldogs posted 8-7 and 2-1 victories over Valpo to open the season series on May 7 and 8, the latter coming in 10 innings, before the Crusaders salvaged one game from the three-game set with a 7-2 win in game two of the doubleheader on May 8.  The two schools had a doubleheader in Indianapolis canceled due to rain on May 17.  Valpo added a 7-3 victory over the Bulldogs on May 26 at U.S. Steel Yard in Gary, Ind. in the Horizon League Tournament.

Wrapping Up Last Weekend: The Crusaders got stellar pitching performances in the first two games of the weekend, but were unable to score any runs.  Tyler Deetjen tossed a complete game four-hitter on Friday in a 1-0 loss at SIU Edwardsville.  On Saturday, Damon McCormick scattered just three hits, but again came up short as Valpo fell 1-0 to Creighton.  The bats finally came alive on Sunday, with Robbie Robinson and Bobby Martin both homering as the Crusaders posted a 9-5 win over SIU Edwardsville.  Jon Gulbransen went 7.2 strong innings for the win.

Scouting Butler: The Bulldogs saw their losing streak extended to five games on Wednesday, falling 15-3 at Indiana State.  Andrew Eckhardt and Grant Fillipitch lead the Butler offensive attack.  Eckhardt is hitting .354 on the year with four stolen bases while Fillipitch is a .354 batter with seven doubles.  As a team the Bulldogs are batting .274.  Butler pitchers have posted a 7.42 ERA entering the weekend while opponents are hitting .343 against them.

Valpo in Horizon League Openers: Entering year four of Horizon League competition, the Crusaders have won all three conference openers since joining the league in 2008.  Valpo split a two-game set at Wright State in 2008 before winning two of three at Butler to open 2009.  The 2010 conference opener saw Valpo take two of three at Youngstown State after the initial league set at Wright State was canceled due to weather.  The Crusaders have yet to open conference play at home.

Don’t Blink or You’ll Miss It: Valparaiso’s baseball game times last weekend totaled 5:04 for three nine inning games.  The Crusaders and SIU Edwardsville played in 1:36 and 2:03 while Valpo and Creighton cruised to a 1:25 contest.  Valpo has only played three three-hour games this season, two of which went extra innings.  Of the 16 games that have finished in nine innings, the Brown and Gold is averaging just 2:22 of playing time.

Solid Pitching Efforts: Tyler Deetjen and Damon McCormick tried to outpitch one another last weekend, unfortunately both suffered 1-0 defeats.  Deetjen went the distance for the second time this season, allowing just the one run on four hits in eight innings.  He struck out four and walked just one against SIU Edwardsville on Friday.  The next day against Creighton, McCormick threw his fourth career complete game, allowing just the one run on three hits in nine innings of work.  He fanned five and did not walk any batters.

Not Allowing Free Passes: After Valpo pitchers had allowed 68 walks over the first 16 games of the season (4.3 per game), the Crusader staff allowed just two batters total to reach via base on balls in the three games last weekend.

Road Trip Finally Coming to a Close: This weekend’s three-game series at Butler marks games number 20, 21, and 22 away from home for the Brown and Gold to open the season.  Valpo will close the 23-game trip on Wednesday, March 30 at Northwestern before returning to Emory G. Bauer Field next Friday for the home opener against UIC.  The Crusaders will then play 15 of its next 22 games at home.

Walking Machine: Ryan O’Gara leads the Horizon League having drawn 15 walks already this season. The free passes have helped the senior post a .357 on base percentage.

Leading the League: Valpo has several other players leading the Horizon League in statistical categories.  Michael Morman shares the top spot with five sacrifice bunts.  Chris Manning is holding down the top spot with two triples.  Damon McCormick has thrown a league-high 33.2 innings on the mound.

Keeping Things Constant: Valpo’s outfield of Steven Scoby in left, Chris Manning in center, and Kyle Gaedele in right have started all 19 games this season.  Gaedele has even hit in the three hole in every game offensively.  Bobby Martin has also started every game at shortstop for the Brown and Gold.

Go Speed Racers: Kyle Gaedele and Chris Manning have the Crusaders off and running on the base paths.  As a team Valpo is 28-for-34 in stolen base attempts, with Gaedele 10-for-11 on the season and Manning 7-for-9.  Gaedele is now 35-for-38 swiping bases in his career at Valpo and leads the Horizon League in stolen bases this season.

This and That: Kyle Gaedele enters the weekend having reached base safely in six straight games ... Robbie Robinson has thrown out seven potential base stealers ... Steven Scoby leads Valpo with seven multi-hit games this season.