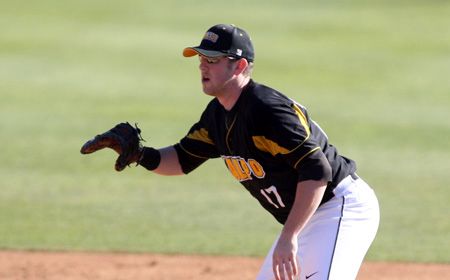 Up Next in Crusader Baseball: Valparaiso closes the month of March, and a season-opening 23-game road trip, on Wednesday afternoon as the Crusaders travel to Northwestern.  Following the non-conference game against the Wildcats, Valpo will come home to Emory G. Bauer Field for 10 of its next 13 contests.

Head Coach Tracy Woodson: Tracy Woodson, the 16th head coach in Valparaiso University history, is in his fifth season at the helm of the Crusaders and has a 98-144 (.405) record both for his career as well as at Valpo.  Woodson ranks fourth in school history for career wins by a head coach.  A member of the Los Angeles Dodgers 1988 World Champion team, he has also managed in the minor leagues through the AAA level.

Probable Starters: Jon Gulbransen (LHP, 1-4, 6.42) will take the mound for the Crusaders against the Wildcats.  Northwestern will counter with Jack Havey (LHP, 1-2, 7.15).

Wrapping Up Butler: The Bulldogs took two out of three from Valpo to open Horizon League play last weekend on a pair of cold days in Indianapolis.  In Friday’s opener, Butler scored twice in the sixth and three times in the seventh on the way to a 6-2 victory.  In game one on Saturday, Corey Thibault homered twice while driving home three runs and Ryan O’Gara also had three RBIs as the Crusaders posted a 12-5 triumph.  The Bulldogs took advantage of a Valpo error in the nightcap, scoring eight unearned runs as part of a nine-run fourth to beat the Crusaders 14-7.

Scouting Northwestern: The Wildcats have won two straight games after downing Campbell last Friday and Saturday to win the series from the Camels.  As a team Northwestern is batting .261 and is led by Chris Lashmet, who is hitting .380 with a team-leading 30 hits.  Trevor Stevens is hitting at a .333 clip with five stolen bases while Chris Kontos bats .324 with a team-high 14 runs batted in.  The Wildcats’ pitching staff has posted a 4.69 earned run average on the year.  Ethan Branscreiber has a 1.00 ERA in six appearances out of the bull pen while Paul Snieder has two saves.

Frane Slams the Door: Justin Frane came out of the bullpen for his first collegiate save on Saturday against Butler.  He worked three innings, allowing just one hit, a bases loaded triple in the eighth with Valpo up one run.  Frane then induced back-to-back ground ball outs with the bases loaded before ending the threat with one of his career-high six strikeouts in the game.

Thibault Finds Power: Corey Thibault had 70 collegiate at bats over the past two seasons without hitting a home run before Saturday.  The sophomore then went deep in both the seventh and ninth innings in game one of the twinbill against the Bulldogs and now shares the team lead this season with his pair of round-trippers.

O’Gara Has Big Weekend: Ryan O’Gara began to break out of his hitting slump last weekend, batting .417 (5-for-12) with a double and four runs batted in against Butler.  He raised his season average 42 points from .185 entering play to .227 heading into this week’s action.  O’Gara is now second on the team with 12 RBIs for the year as well.

Finally Getting Runners Home: Valpo entered last weekend’s play batting just .182 with runners in scoring position.  The Crusaders had much more success in the three games against Butler, scoring runners in nine of 27 at bats (.333) with runners on second and/or third.

Manning Goes for Three: Chris Manning hit his Horizon League-leading third triple of the season against Butler.  He is halfway to moving into the top-five on Valpo’s single season charts as Kevin Perri (2005) and Paul Swenson (2005) both had six three-baggers to tie for fourth on the yearly charts.

Don’t Blink or You’ll Miss It: Valparaiso’s baseball game times continue to move along.  The Crusaders are averaging just 2:24 for the 19 nine-inning games in which they have played this season.  Valpo has gone over three hours just three times this year, two of which were 11-inning contests.

Road Trip Finally Coming to a Close: Wednesday’s contest against Northwestern marks the final game of a 23-game road trip to open the season for the Brown and Gold.  The Crusaders will open the home portion of the schedule on Friday against UIC, the first of a five-game homestand at Emory G. Bauer Field.  Valpo will play 10 of its next 13 games at its friendly confines.

Leading the League: Valpo has several players leading the Horizon League in statistical categories.  Ryan O’Gara shares the top spot having drawn 16 walks on the year while Michael Morman shares the top spot with five sacrifice bunts.  Kyle Gaedele has a league-best 11 stolen bases and Damon McCormick has thrown a league-high 39.2 innings on the mound.  As a team the Crusaders lead the conference with six triples.

No Changes in the Outfield: Valpo’s outfield of Steven Scoby in left, Chris Manning in center, and Kyle Gaedele in right have started all 22 games this season.

Go Speed Racers: Kyle Gaedele and Chris Manning have the Crusaders off and running on the base paths.  As a team Valpo is 29-for-35 in stolen base attempts, with Gaedele 11-for-12 on the season and Manning 7-for-9.  Gaedele is now 36-for-39 swiping bases in his career.

This and That: Kyle Gaedele enters the weekend having reached base safely in nine straight games ... Chris Manning and Will Hagel each have hit safely in four straight games ... Steven Scoby had his eighth multi-hit game, and second three-hit game, of the year on Saturday at Butler ... Jon Gulbransen’s start on Wednesday will be the 46th of his career.