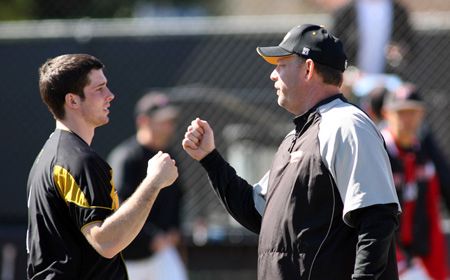 Up Next in Crusader Baseball: Having reached the midweek point of the 56-game schedule, Valparaiso begins the second half of the season this weekend with a three-game Horizon League series at Cleveland State.  The Crusaders look to climb into the top half of the conference standings.

Head Coach Tracy Woodson: Tracy Woodson, the 16th head coach in Valparaiso University history, is in his fifth season at the helm of the Crusaders and has a 102-146 (.411) record both for his career as well as at Valpo.  Woodson ranks fourth in school history for career wins by a head coach.  A member of the Los Angeles Dodgers 1988 World Champion team, he has also managed in the minor leagues through the AAA level.

Wrapping Up Indiana State and Wabash: Valparaiso received quality pitching during both midweek contests but came a way with a split in the two games at Emory G. Bauer Field.  The Crusaders led Indiana State until the ninth, but a pair of errors in the final inning allowed the Sycamores to score twice and post a 3-2 victory over Valpo.  Jon Gulbransen pitched eight strong innings, allowing just four hits in the loss on Tuesday.  On Wednesday against Wabash, Kevin Upp allowed just one infield hit over six innings as the Crusaders defeated the Little Giants 6-1.  Andrew Bain had three hits while Will Hagel drove home a pair of runs in the win.

Scouting Cleveland State: The Vikings enter the weekend series having lost five straight games following a 13-5 loss to Pittsburgh at home on Tuesday and a 5-1 setback at Toledo on Wednesday.  Cleveland State is still looking for its first Horizon League win after being swept in three-game sets at both UIC and Wright State.  As a team the Vikings are batting just .225, led by Alex Gnezda who is hitting at a .289 clip.  Alex Johnson holds the team lead with 11 runs batted in.  The pitching staff has posted a 6.24 earned run average on the year while opponents are hitting .312 off of Cleveland State hurlers.  Clayton Ruch leads the team with a 3.09 ERA in 17 appearances out of the bullpen.

Bain Produces in the Nine Hole: Since returning from the spring trip and taking over at shortstop, Andrew Bain has also started producing at the plate.  The sophomore is batting .429 (9-for-21) over the past seven games, with a pair of three-hit contests.  Bain has raised his batting average 171 points from .111 on March 26 to his current mark of .282.  For the year Bain is also batting .500 with men on base, .444 with runners in scoring position, and has successfully advanced runners at a .650 clip, tops on the team.

Closing Time: After giving up a pair of earned runs in his first appearance of the season at Austin Peay, Karch Kowalczyk has been nearly perfect in the closer’s role for the Crusaders.  In his last seven appearances he has surrendered just one unearned run and three hits in eight innings, lowering his ERA to 1.80.  Opponents are hitting just .143 on the year against Kowalczyk.

Quality Pitching in League Play: Valpo’s pitching staff has notched a 3.46 ERA through the first two Horizon League series against Butler and UIC.  Justin Frane has a 1.17 conference ERA to lead the way among those who have started at least one game.  The staff has limited conference foes to just a .225 batting average and have struck out 49 hitters in six games.

Backstop Duo: Valpo’s catching tandem of Robbie Robinson and Corey Thibault have been solid at the plate in Horizon League play.  Thibault is hitting .500 (6-for-12) with two homers and five runs batted in while scoring five times.  Robinson is batting .400 (6-for-15) with four runs scored.

Don’t Blink or You’ll Miss It: Valparaiso’s baseball game times continue to move along.  The Crusaders are averaging just 2:22 for the 25 nine-inning games in which they have played this season.  Valpo has gone over three hours just three times this year, two of which were 11-inning contests.  The two midweek contests against Indiana State and Wabash this week went 1:58 and 1:59 respectively.

Leading the League: Valpo has several players leading the Horizon League in statistical categories.  Chris Manning has a league-high three triples while  Kyle Gaedele leads the conference with 16 steals, six more than his closest pursuer.  Jon Gulbransen has thrown a league-high 48.2 innings on the mound.  As a team, Valpo leads the conference in steals (38), strikeouts by its pitchers (190) and opponents batting average (.258).

Go Speed Racers: Kyle Gaedele and Chris Manning have the Crusaders off and running on the base paths.  Gaedele is already 16-for-17 swiping bases, and is now 41-for-44 during his three-year career with the Brown and Gold.  Manning has nearly been as successful, stealing 10-of-13 attempted bases during his freshman campaign.

Career Lists Part Two: Jon Gulbransen also continues to climb the career strikeouts list at Valpo.  The southpaw has fanned 225 hitters during his career,  passing Tom Starck (2001-2004) for fifth on the career charts.  The southpaw is just 25 strikeouts behind Bryce Shafer (2008-2010) for fourth place.

This and That: Kyle Gaedele enters the weekend having reached base safely in 15 straight games while Steven Scoby has reached safely in 10 straight games ... Robbie Robinson has the team’s longest active hitting streak at four ... Valpo’s outfield of Steven Scoby in left, Chris Manning in center, and Kyle Gaedele in right have started all 27 games ... the three road games at Cleveland State are the only games away from Emory G. Bauer Field in a 13-game span.