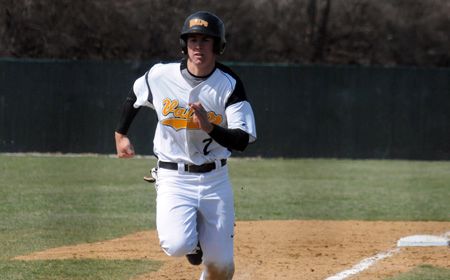 Up Next in Crusader Baseball: Riding the nation’s longest active winning streak, Valparaiso leaves the mainland this weekend for a three-game Easter weekend series against Hawai’i in Honolulu.  The Crusaders will take a weekend off from Horizon League action having won nine straight games overall, including four straight on the road.

Head Coach Tracy Woodson: Tracy Woodson, the 16th head coach in Valparaiso University history, is in his fifth season at the helm of the Crusaders and has a 110-146 (.430) record both for his career as well as at Valpo.  Woodson ranks fourth in school history for career wins by a head coach.  A member of the Los Angeles Dodgers 1988 World Champion team, he has also managed in the minor leagues through the AAA level.

Series Notes: Valparaiso and Hawai’i will be meeting on the diamond for the first time ever this weekend.

Wrapping Up Recent Action: Valparaiso swept a three-game Horizon League series against Youngstown State over the weekend.  The Crusaders won the opener 11-1 on Friday behind eight innings of one-run, five-hit baseball by Justin Frane.  After Saturday’s doubleheader was postponed to Sunday, Kyle Gaedele delivered a two-run walk-off single in the bottom of the ninth to give Valpo a 4-3 victory in the opener of the twinbill.  Damon McCormick allowed just two unearned runs in 8.1 innings of work on the mound.  In the series finale, Valpo scored three times in the bottom of the eighth after the Penguins tied the game in the top of the inning, and defeated Youngstown State 5-2.  Robbie Robinson drove home three runs in the win.  Monday, Valpo took advantage of eight Saint Francis (Ind.) errors to defeat the Cougars 8-3, running the Brown and Gold’s home win streak to six consecutive games.

Scouting Hawai’i: The Rainbows have won nine of their last 10 games overall after winning three of four against Louisiana Tech in a wraparound weekend series.  Hawai’i is wrapping up a 27-game homestand against Valpo this weekend, and will have played 36 of its first 41 games at home following the series with the Crusaders.  Kolten Wong leads the Rainbows batting .383 with five home runs and 28 runs batted in.  Zack Swasey is hitting .315 with 18 RBIs for a team hitting .259.  Hawai’i’s pitching staff has posted a 3.00 earned run average on the year with opponents batting just .228 against them.  Lenny Linsky is 1-1 with a 1.21 ERA and seven saves in 17 appearances.

Frane Named Pitcher of the Week: Senior hurler Justin Frane was named the Horizon League’s Pitcher of the Week after limiting Youngstown State to just one earned run and five hits over eight innings for his second victory of the season.  The right-hander walked just one and struck out four.  On the season he is now 2-1 with a 1.93 ERA, including a 0.73 ERA in Horizon League action.

Win Streak is Nation’s Best: Through Monday’s games, Valparaiso’s nine-game winning streak was tied with Oregon State and Stetson for the nation’s longest active mark.  The Crusaders have also won four in a row on the road, tied for the nation’s seventh longest road win streak.

Quite a Turnaround: After starting the season 1-17, Valpo has posted a 14-4 record over the last 18 games. During the 18-game stretch, the Crusaders have allowed more than three runs in a game just once, a 5-2 loss to UIC.  Valpo hurlers have posted a 2.03 ERA during the 18-game span, with opponents batting just .198 over that time.

Throwing Strikes: During the 14-4 stretch, Valpo pitchers have walked just 34 batters during the 18-game span.  Meanwhile, Crusader hurlers have struck out 137 batters, an average of 7.6 per game.

Hagel On Fire: Will Hagel had his string of six straight multi-hit contests snapped against Saint Francis (Ind.) when he went 1-for-2 with a triple after coming in as a pinch hitter in the seventh inning.  In his last seven games, Hagel is batting .560 (14-for-25) with 10 runs batted in, a homer, and two triples.  He has increased his batting average 74 points over the seven game span.

On a Big Stage: As Valpo heads to Hawai’i, the Rainbows currently rank 15th nationally in average attendance drawing 3,351 fans per game.  Valpo, on the other hand, has drawn a total of 1,229 fans to its eight home dates.

Don’t Blink or You’ll Miss It: Valparaiso’s baseball game times continue to move along.  The Crusaders are averaging just 2:18 for the 33 nine-inning games in which they have played this season.  Valpo has gone over three hours just three times this year, two of which were 11-inning contests.  The Crusaders have had a game go more than two-and-a-half hours just twice since March 13.  Those games were 2:35 and 2:34.  Five games have been played in under two hours.

Go Speed Racers: Kyle Gaedele and Chris Manning have the Crusaders off and running on the base paths.  Gaedele is already 17-for-18 swiping bases, and is now 42-for-45 during his three-year career with the Brown and Gold.  Manning has nearly been as successful, stealing 15-of-18 attempted bases during his freshman year.  As a team, Valpo is 47-of-58 in stolen base attempts (81.0%) on the season, posting the best success rate in the Horizon League.


Career Lists Part Two: Jon Gulbransen also continues to climb the career strikeouts list at Valpo.  The southpaw has fanned 238 hitters during his career,  passing Tom Starck (2001-2004) for fifth on the career charts.  The southpaw is just 12 strikeouts behind Bryce Shafer (2008-2010) for fourth place.

This and That: Chris Manning and Kyle Gaedele have started all 36 games in center and right fields respectively ... Valpo catchers have thrown out 37% of base runners trying to steal this season ... Gaedele and Will Hagel lead the team with 26 and 25 RBIs respectively ... Valpo’s nine-game winning streak is its longest since the Crusaders won 10 straight from April 7 through April 19 of 2001 ... the school record for longest winning streak is 12 straight from April 19 through May 28 of 1958 ... Valpo is 13-1 when leading after eight innings this year.