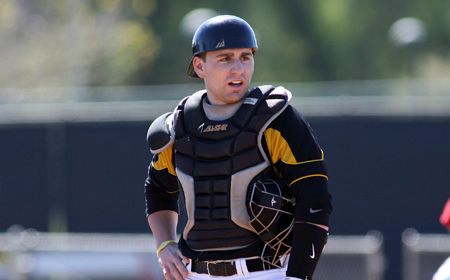 Corey Thibault is one of nine seniors to be honored on Saturday. (Jeff Golden)
Related Links

Up Next in Crusader Baseball: With only two weekends left in the regular season, Valparaiso closes out the home portion of the 2011 schedule on Saturday afternoon hosting Milwaukee in a Senior Day doubleheader.  The Crusaders then take to the road on Sunday, traveling to UIC for another twinbill as the Brown and Gold looks to remain in the hunt for a Horizon League title.

Head Coach Tracy Woodson: Tracy Woodson, the 16th head coach in Valparaiso University history, is in his fifth season at the helm of the Crusaders and has a 116-151 (.434) record both for his career as well as at Valpo.  Woodson ranks fourth in school history for career wins by a head coach.  A member of the Los Angeles Dodgers 1988 World Champion team, he has also managed in the minor leagues through the AAA level.

Series Notes: Milwaukee leads the all-time series against Valpo 23-11 dating back to 1990 after the Panthers won four of five games against the Crusaders last season.  Milwaukee downed Valpo twice in the Horizon League tournament, both by 3-1 scores, and took two of three from Valpo in the regular season series.  UIC holds a 51-43 edge over the Crusaders going back to 1977.  Valpo won two of three from the Flames at home on April 2-3 of this season.

Wrapping Up Wright State: The Raiders took the series opener on Saturday 10-4, taking advantage of four Valpo errors.  The Crusaders rebounded in the night cap on Saturday with a 6-2 win, highlighted by Damon McCormick’s complete game victory and Kyle Gaedele’s three-run seventh inning homer.  In Sunday’s series finale, Valpo jumped out to a 5-0 lead only to have the Raiders rally with two runs in the ninth to down the Crusaders 6-5.

Scouting Milwaukee: The Panthers have won five of their last six games following a series win against Youngstown State last weekend two games to one.  Doug Dekoning leads the offense batting .379 with seven home runs and 41 runs batted in.  Cole Kraft is hitting .330 on a squad with a .280 team batting average.  Milwaukee’s pitching staff has posted a 4.14 earned run average while limiting opponents to just a .253 batting clip.

Scouting UIC: The Flames have dropped five straight games entering the weekend after falling 3-2 at Northwestern on Tuesday.  UIC heads to Cleveland State on Friday before hosting the Crusaders Sunday afternoon.  Matt Serna leads the Flame offense batting .354 with 24 RBIs.  Andy Leonard is hitting at a .310 clip while Jason Ganek has six homers for a team batting .271 as a unit.  UIC’s pitching staff has posted a 4.52 ERA on the year.

Thanks Seniors: Valparaiso will celebrate Senior Day on Saturday prior to the final home doubleheader of the season against Milwaukee.  Festivities honoring this year’s nine member senior class will begin at approximately 11:45 a.m. at Emory G. Bauer Field.

League Race Tightens: With seven Horizon League games remaining for nearly everyone in the conference (Cleveland State has just four), the race for the top spot could not be any tighter.  Valparaiso is just one-half game behind Wright State for the top spot, while UIC is one-and-one-half games behind the Crusaders and Milwaukee sits two back of the Brown and Gold.  The top two finishers receive a bye in the first round of the tournament.

Playing Well at Home: Valpo has posted an 11-3 record at Emory G. Bauer Field this season, heading into the final doubleheader.  The Crusaders have posted a winning home mark in each of the last five years, and are 40-14 at the friendly confines over the last three seasons.

Jumping on Top: Valparaiso has scored first in 30 of its 47 games this season.  The Crusaders struck first in each game last weekend at Wright State.

Morman Has Big Week: Michael Morman had one of his best series as a Crusader last weekend at Wright State after a two-hit game at Northern Illinois last Tuesday.  The freshman is batting .533 (8-for-15) with a home run, a double, and five runs batted in over his last four contests.  He has raised his average 33 points during the span.

Martin’s Hit Streak Reaches Nine: Bobby Martin has hit safely in each of his last nine games entering the weekend, dating back to the final game of the series at Hawai’i on April 23.  During the streak, the junior college transfer is batting .424 (14-for-33) with eight runs scored.  He has raised his average 43 points during the streak to .258.

Finishing What They Start: Valpo’s pitching staff has tossed nine complete games already this season, led by Tyler Deetjen’s four and Damon McCormick’s three.  Jon Gulbransen and Justin Frane each have a complete game as well.
Win Streak was Second Longest Ever: Valparaiso’s 10-game winning streak from April 6 through April 21 matched the second longest ever in program history.  Only a 12-game streak in 1958 has been longer in school history.

Don’t Blink or You’ll Miss It: Valparaiso’s baseball game times continue to move along.  The Crusaders are averaging just over 2:19 for the 42 nine-inning games in which they have played this season.  Valpo has gone over three hours just four times this year, two of which were 11-inning contests.

Gulbransen Moving Career List: Jon Gulbransen has moved into second place on Valpo’s career innings pitched list with 308.1 at Valpo, passing Tim Holmes (1984-1987).  He needs just 6.1 more innings to match Harvey Yergin (2004-2007) as the career record-holder at Valpo.  His 17 career victories are also seventh all-time in a Crusader uniform.  Gulbransen’s next win will move him into a tie for fourth on the career charts.

Career Lists Part Two: Jon Gulbransen also continues to climb the career strikeouts list at Valpo.  The southpaw has fanned 254 hitters during his career,  passing Shawn Barker (1987-1990) for third on the career charts.  The southpaw is just 40 strikeouts behind Jon Robisch (1961-1964) for second place on the all-time list.

This and That: Will Hagel has reached base safely in 20 straight games dating back to April 6 and his hitting a team-leading .325 ... Hagel is batting .485 (33-for-68) during the span and has drawn nine walks (.545 on base percentage) ... Kyle Gaedele ranks among the top-10 in the Horizon League in nine different statistical categories.