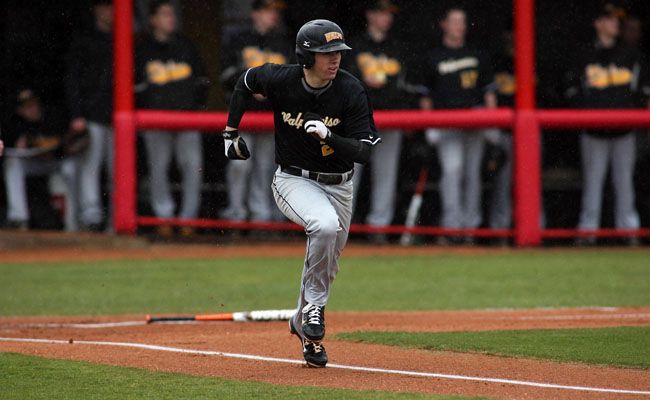 Chris Manning is off to a hot start in the summer leagues. (Jeff Golden)

After helping the Crusaders reach their first Horizon League Championship Game this spring, 12 returning Valparaiso University baseball players as well as five newcomers are honing their skills in collegiate wood bat leagues across the nation this summer. The following is an update on how the Crusaders are doing in their respective leagues.

Returning sophomores Chris Manning (Lake Forest, Calif./El Toro H.S.) and Kevin Upp (LaPorte, Ind./LaPorte H.S.) along with incoming junior college transfer John Loeffler (Burnsville, Minn./Burnsville Sr. H.S.) are playing for the Terre Haute Rex in the Prospect League.  The Rex are currently one of the hottest teams in the Prospect League as they have won 12 of their last 16 games. Outfielder and lead-off hitter, Chris Manning is off to an exceptional start as he is hitting .400 with nine extra-base hits and seven stolen bases in 25 games played.  Manning, a 2011 Horizon League All-Tournament Team selection, had a league-best 23 game hitting streak broken in the 24th game of the year and is the league-leader in triples with four.  Kevin Upp, a right-handed pitcher who was named to the Horizon League All-Newcomer Team this past season, has started four games for the Rex, pitching 16.1 innings with 14 strikeouts and a 4.96 ERA.  Used primarily as a first-baseman, John Loeffler joined the team late and has made an immediate impact at the plate.  In 15 games played, Loeffler is hitting .306 with five doubles, 10 runs batted-in, and nine walks.

Returning seniors Steven Scoby (Delton, Mich./Delton Kellogg H.S.) and Jarad Miller (Fort Wayne, Ind./Carroll H.S.) are both playing for the DeKalb County Liners also of the Prospect League.  Scoby, an outfielder, is hitting .258 with 13 walks and five stolen bases in 22 games played.  Finally returning from an injury, Miller, who was named to the 2009 Louisville Slugger NCAA Division I All-American Third Team, has pitched in six games. He currently has a 3.68 ERA in 7.1 innings pitched, leading the team in saves with three.

Senior first baseman Will Hagel (Arlington Heights, Ill./Prospect H.S.) and junior right-handed pitcher Greg Stiller (Indianapolis, Ind./North Central H.S.) are playing for the Dodge City A’s of the Jayhawk League.  A First Team All Horizon League team selection this year, Hagel continues to impress at the plate. In 17 games played, he is hitting a team-high .426 with 10 doubles, three homeruns, 11 walks, a .706 slugging percentage and a .500 on base percentage.  Stiller has made six appearances out of the bullpen pitching 8.1 innings with five strikeouts.

Senior left hander Tyler Deetjen (Saint Charles, Ill./East H.S.) is playing for the Marysville Gold Sox of the Horizon Air Summer Series located in northern California.  Deetjen is 2-0 in three appearances posting a 2.30 ERA. In 15.2 innings, Deetjen has struck out 13 while giving up only one walk.

Senior infielder Bobby Martin (Crystal Lake, Ill./Prairie Ridge H.S.) and senior pitcher Kevin Wild (Brown Deer, Wis./Brown Deer H.S.) are playing for the Wisconsin Rapids Rafters and incoming junior college transfer Tanner Vavra (Menomonie, Wisc./ Menomonie H.S.) is playing for the Alexandria Beetles.  Both teams compete in the Northwoods League.  In 23 games played, Martin is hitting .258 with five extra-base hits, six stolen bases and eight runs batted in. Wild has made 11 appearances out of the bullpen, pitching 13 innings with 10 strikeouts and a 4.15 ERA. For the Alexandria Beetles, Vavra, a middle infielder, is currently hitting .246 in 17 games played with four walks and six runs batted in.

All of the Crusaders will look to continue their success on the diamond throughout the rest of the summer before heading into the 2012 season at Valpo.