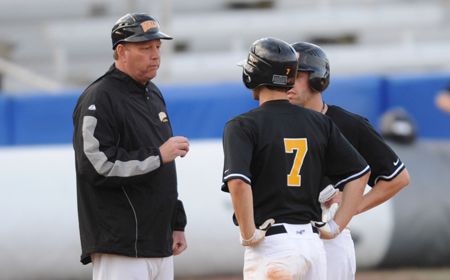 Tracy Woodson has had his contract extended through 2014. (Dave Schofield)

Valparaiso University head baseball coach Tracy Woodson has signed a four-year contract that will extend through the 2014 season Mark LaBarbera, director of athletics has announced.

“Tracy has built our program into a Horizon League contender,” LaBarbera said.  “The baseball team continues to succeed both on the field and in the classroom, and this is a direct result of Coach Woodson’s leadership.  We are excited to know that he will be here for the next several years.”

Woodson just completed his fourth season at the helm of the Crusader program, arriving in August, 2006.  Since his arrival, Valpo has finished third in the Horizon League Tournament twice, and recorded its first winning season since 1999 during the 2009 campaign.

Under Woodson’s guidance, three Crusaders have been selected to the Horizon League’s First Team while three others have garnered Second Team honors.  Four players have been named to the conference’s All-Newcomer Team with five individuals earning All-Tournament Team accolades.  He has also produced a pair of Horizon League batting champions.

Three of Woodson’s players have also been selected in the Major League Baseball draft, including for the first time in 31 years, two players selected this past June.

“I want to thank Mark LaBarbera and Valparaiso University for giving me the opportunity to continue what we started and set out to do with this baseball program,” Woodson said.  “I am excited about the talent we have returning next year, as well as the players that are coming into the program for the future.  Our players and parents have made it a very exciting time for Valparaiso baseball, and I believe our best baseball is still in front of us, both in the Horizon League and overall.”