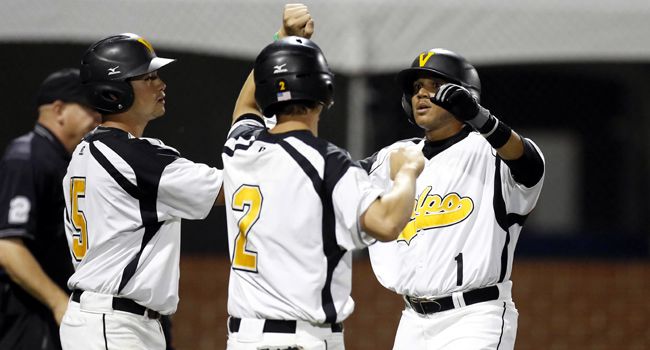 Coming off a banner 2012 campaign, Valpo finds itself in uncharted territory.  For the first time since joining the Horizon League, the Crusaders open a season as defending champions.

On a sizzling afternoon last May in Chicago, Valparaiso University prevailed 14-5 over the UIC Flames in the championship game of the Horizon League Conference Tournament.  The victory propelled the Crusaders to its first trip to the NCAA Tournament in 44 years and the culmination of a journey head coach Tracy Woodson embarked on six years prior.

After 14 years of professional playing experience and eight years of professional managerial time under his belt, Woodson started his collegiate coaching career at Valpo during the 2007 season and took a program that had found itself mired in a state of mediocrity for some time and has cultivated it into a viable contender.  In addition to Woodson being named the Horizon League's 2012 Coach of the Year, last year's club matched a school watermark for wins in a season en route to a 35-25 record.

A program on the ascent, the staff has made significant inroads on a national recruiting level, as noted by a roster that features players from ten states including five from California.  A strong mix of transfers to complement incoming freshmen has given the Crusaders considerable roster balance.

Last season, Valpo sported a hearty .290 team batting average under the tutelage of third-year hitting coach Adam Piotrowicz.  The Brown and Gold graduated two position players - Will Hagel and Steven Scoby - and with that, two corner outfield positions are up for grabs.

Redshirt sophomore Michael Morman is slated to fill one as he missed last season with a torn ACL.  The arrival of Bryce Hara will shift junior Chris Manning from center to right field.  Hara's plus range makes him a sound fit in the spacious outfield at Emory G. Bauer Field.  Sophomore Mark Johnson represents an intriguing option.  As a freshman, Johnson was inserted into the starting lineup for an injured Hagel in last season's Conference Tournament and earned Most Valuable Player honors, going 4 for 10 with five walks and four runs batted in.

The Crusaders return an infield that boasts last year's Freshman All-American Spencer Mahoney at shortstop, as well as 2012 Horizon League First Team members Tanner Vavra and Elliott Martin at second base and third base, respectively.  Vavra typically possesses the best baseball instincts of any player on the field at any given time and his ability to bunt for a hit, sacrifice, or take an extra base was taken advantage of early and often last season as the Crusaders ranked 3rd in the nation in sacrifice bunts.  His 15 stolen bases led the team.

Martin feasted on Horizon League pitching last year in his first season with Valpo as 38 of his team-high 50 runs batted in came in conference play.  His .385 batting average in Horizon League games was a team best as well.

Coming off a season where he compiled a .400 on-base percentage to go along with 18 doubles, senior John Loeffler should again see the majority of time at first base.  Heartland Community College transfer Andy Burns is eligible for the 2013 season after sitting out last spring.  Burns, along with freshman Jeff Edwards, will spell considerable defensive depth to an infield that committed 56 errors in 2012.

The Crusaders will be without the services of Grant Yoder this spring.  The 6’4” 220-pound designated hitter will claim a medical redshirt as he’ll undergo back surgery in the coming weeks.  Yoder ripped five extra base hits and drew eight walks in 61 at-bats as a freshman last season.

Senior Andrew Bain will be in the mix for at-bats out of the designated hitter spot.  This year's co-captain finished with a team-high 83 hits last season while splitting time amongst left field, second base, and DH.  Bain’s ability to work counts and fight off tough pitches makes him one of the most difficult Crusaders to strike out.

Fifth-year senior Billy Cribbs can expect to get the lion's share of innings behind the plate.  The elder statesman started 56 of the team's 60 games last season, though the second half of 2012 may serve as a cautionary tale.  The veteran catcher recorded just three extra base-hits over the final 25 games.  Transfer Andrew Bynum has been working out behind the dish and could give Woodson a position in which to utilize his bat.  The California native poses a legitimate power threat for a team that went deep just 14 times last season.  Fifth-year senior Tyler Weddington and freshman Jake Hanson will also back up Cribbs.

One of the more glaring question marks facing the 2013 Valparaiso Crusaders may very well emerge as an area of strength.  Associate head coach/pitching coach Brian Schmack has the task of replacing 346 2/3 innings pitched from a staff that a year ago touted a 3.42 team ERA, best in the Horizon League and tied for 47th lowest in the nation.  The pitching staff will be without 2012 Pitcher of the Year Kevin Wild, Second Team All-Horizon League starter Tyler Deetjen, and closer Jarad Miller.

A slew of new arms will provide ample competition with a couple veteran pitchers for weekend innings.  Transfers Cole Webb and Chris DeBoo will follow Wormington in the opening series in Nashville. Freshman Trevor Haas turned some heads in the fall and will compete with fellow newcomer Dalton Lundeen for mid-week innings.

Keep an eye on Ellis Foreman, a freshman out of Round Rock, Texas.  The 6'3'' right-hander spent virtually all of 2012 rehabbing from Tommy John surgery performed last January.  Despite a lengthy rehabilitation process, the young pitcher is expected to vie for a starting spot.

Redshirt junior Sean Kennedy and sophomore Ben Mahar give Schmack flexibility as one - or both - could shift from long relief into a starter role if need be.  Both featured steady command last season for the Crusaders (combined 8 BB in 61 1/3 IP) and were instrumental out of the bullpen in a second half surge that found Valparaiso winners 27 times in a 32-game stretch.

Also a year removed from Tommy John surgery, redshirt junior Karch Kowalczyk will inherit the closer's role, a spot vacant with the graduation of Miller, Valpo's all-time career leader in saves.  Kowalczyk’s arsenal includes a fastball that sits in the low 90's and a sharp breaking ball, both plus pitches that have garnered the attention of multiple scouts.  Zack Walsh, Ryan Kennedy, captain Mike Jacobs, and a handful of freshmen bolster the depth of a stingy bullpen.

Another rugged slate will challenge Valparaiso this spring.  The Crusaders open the season in Nashville on Friday where they'll play two against a Belmont team that won 39 games last season.  Valpo will also face Ohio University one game while in the Music City.  The Bobcats have made 14 appearances in the NCAA Tournament.  Other prominent games on the schedule include road series with Long Beach State, South Florida, Arizona State, and a mid-week tilt against Notre Dame.

With Butler's exodus to the Atlantic 10, the Horizon League will begin conference play a week later than last season.  Valpo filled the weekend previously reserved for the Bulldogs with the Arizona State series in Tempe beginning April 19th.

This year the Crusaders are the hunted, rather than the hunters.  Nevertheless, Valpo finds itself in a reloading - rather than a rebuilding - mode.