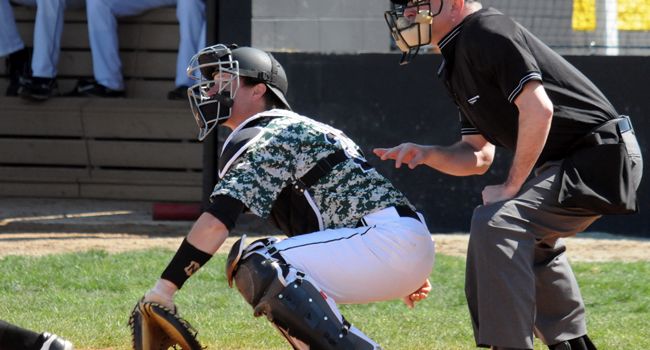 Senior Billy Cribbs has been behind the plate in 13 of Valpo's first 14 games this season.
Related Links

This Week in Crusader Baseball: After going 2-3 in Port Charlotte then taking one game from the University of South Florida in Tampa, Valparaiso concludes its 17-day trip to the Sunshine State in Winter Haven.  The Crusaders are 3-5 thus far on the Florida swing with five neutral-site games against predominantly northern teams remaining on the slate.

On the Air: No games will be broadcast while in Winter Haven, Florida.

Head Coach Tracy Woodson: Tracy Woodson, the 16th head coach in Valparaiso University history, is in his seventh season at the helm of the Crusaders and has a 159-192 (.453) record both for his career as well as at Valpo.  Woodson ranks third in school history for career wins by a head coach.  A member of the Los Angeles Dodgers 1988 World Champion team, he has also managed in the minor leagues through the AAA level.

Probable Starters: Freshman LHP Dalton Lundeen (0-0, 7.94) will take the ball in the first game of the five-game set for the Crusaders. Freshman RHP Trevor Haas (0-1, 9.00) will make his second collegiate start for Valpo in the Wednesday game against Yale. RHP Kyle Wormington (0-3, 3.33) will make a pitch for his first win of the 2013 campaign in Thursday’s tilt for the Crusaders versus Bucknell.  Junior RHP Cole Webb (2-2, 1.86) will put his streak of four consecutive quality starts on the line against UAB on Friday.  RHP Chris DeBoo (0-4, 4.91) will round out the trip for Valpo on Saturday against Miami of Ohio.

Series Notes: Tuesday’s game against Navy will be the first in the two school’s history.  The Yale Bulldogs won the only contest between the two schools in 2006.  The Crusaders will be facing Bucknell and Miami (OH) for the first time ever. Valpo and UAB have played eleven times with the Crusaders victorous in only two matchups.  Friday’s game against the Blazers is the first since 1996.

Looking Back: Valparaiso finished 2012 with a 35-25 record overall and a 22-8 mark in the Horizon League.  The Crusaders took first place in both the regular season and Horizon League Tournament in Chicago before they made their first NCAA Tournament appearance in 44 years.

Scouting the Opposition: Navy currently stands at 6-8 overall.  After thirteen games, the Midshipmen registered a 4.23 team earned run average. The staff boasts an impressive strikeout-to-walk ratio of 3:1 as Navy is averaging just under 1.00 K/9 (112 K in 117 innings). The offense is batting .264 as a team led by Kash Manzelli, who is hitting .347 with a homer and 8 RBIs. David Wiedeman has drawn nine walks in 50 plate appearances for a .481 on-base percentage. Opponents have just a 54% success rate when attempting to steal on Navy.

Yale is just 0-3, as their season opened Saturday versus Army.  The Bulldogs are hitting .245 as a team with a .592 team on-base plus slugging percentage.  Their pitching staff carries a 5.48 earned-run average.  Opponents are hitting .276 against them in the early going.

Bucknell has struggled out of the gate with a 2-9 record, with its wins coming against Harvard and North Dakota State.  As an offense, the Bison are averaging a shade over 10 strikeouts per game.  Carter Bumgardner is the only Bison with an average over .300.  The team has a bleak .194 batting average along with a .241 on-base percentage.  Opposing teams have a 1.45 earned-run average against Bucknell. On the hill, Bison arms have walked 49 and struck out 50 while sporting a 5.36 ERA.

UAB is at 7-9, but 1-6 on the road.  The Blazers are coming off a two-game sweep over St. Joseph’s and a series loss against Arkansas State. UAB has three regulars hitting over .300 and two under .200.  The team’s slugging percentage sits at a meager .294.  Valpo is expected to see right-hander Tanner Bryant on Friday.  Bryant has a 1-1 record with a 3.86 ERA.  The senior hurler  has struck out 17 batters and allowed five walks in 18 2/3 innings.

Miami of Ohio entered Tuesday’s action with a 5-6 record.  The Red Hawks currently hold a 4.98 staff ERA and a 1.61 WHIP.  Mac Thoreson is Miami’s projected starting pitcher Saturday.  Thoreson is 0-2 with a 6.61 earned-run average.  The right-hander has issued only three walks in 16 1/3 innings pitched.  The Red Hawk bats are hitting a collective .244.  Alex Johnson leads the Miami offense in RBIs with eight. The Red Hawks have been successful in 15 out of 19 stolen base attempts.

Et Cetera: Eight of the Crusaders’ first fourteen games have been one-run affairs with Valpo registering a 3-5 record...At 4-10, the Crusaders sit at the same position they were a year ago after fourteen team games...Kyle Wormington, Cole Webb, and Chris DeBoo will all make their third starts in Florida versus Bucknell, UAB, and Miami (OH) respectively...The weekend starters collectively are 2-9, despite a combined 3.30 earned-run average. Senior Elliott Martin has raised his average to .283 thanks to a productive past eight games...Entering the season as arguably the best middle infield in the Horizon League, Spencer Mahoney and Tanner Vavra have combined for thirteen errors already...The average time of game for Valpo games in which Cole Webb starts is 2 hours, 22 minutes.