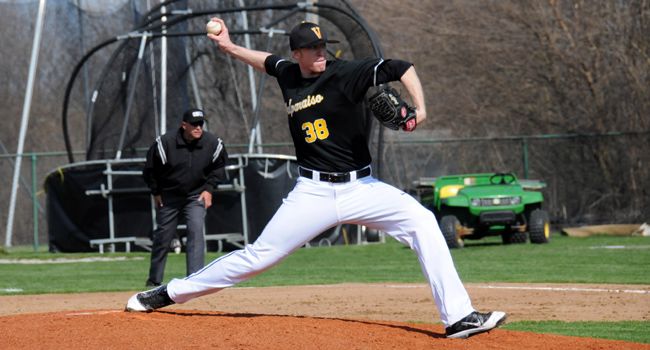 Chris DeBoo did not allow an earned run over seven innings in his victory over Wright State Friday. In Horizon League play, the right-hander is 2-1 with a 3.55 ERA. (Ray Acevedo)
John Loeffler had a 7-for-11 weekend with seven runs batted in and two doubles. The senior has reached base in 32 consecutive games.

After a convincing sweep over Wright State this past weekend, the Crusaders have more hardware coming their way.

In three games last week, Loeffler went 7-for-11 with seven runs batted in, two runs scored, two doubles, a pair of walks, and a sacrifice fly. He raised his average from .273 to .302 in the process. Loeffler currently owns a 32-game on-base streak. The senior has started 94 games at Valparaiso, reaching base in 87 of those starts.

DeBoo lowered his ERA to 3.55 in Horizon League games with seven innings of no earned run ball Friday against the Raiders. The right-hander scattered six hits and needed just 90 pitches to get through the seven innings in the 5-1 series-opening win. DeBoo has a 1.15 WHIP in five conference starts.

Valpo (18-23, 7-8 Horizon) will entertain Goshen College Monday and Western Michigan Tuesday before the first-place Milwaukee Panthers (18-16, 11-4 Horizon) come to town this weekend for a three-game set.