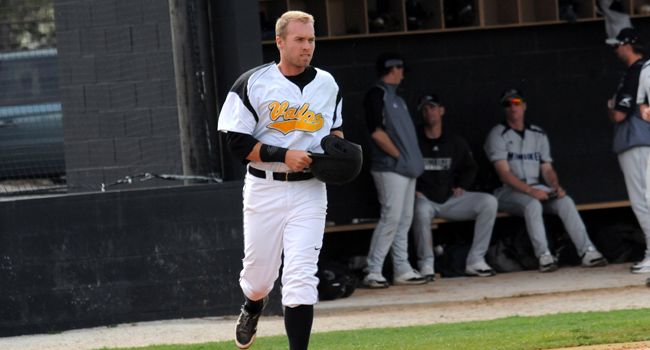 Just or not, few baseball players carry reputations as saints. The performance-enhancing drug debacle has painted a dark stain on the image of our national pastime. But it runs deeper than that.  Perhaps it’s due to a society that elicits strange satisfaction from riches-to-rags stories. Maybe it’s a jealousy rooted in the fact that modern day baseball players earn exponentially more money than their elder counterparts. Regardless, a certain level of skepticism and cynicism surrounds the benevolence of ball players.

While the aforementioned holds lesser relevance to the college game, Valpo first baseman John Loeffler represents Ward Cleaver in a game of Eddie Haskells. Respected and well-liked for the right reasons, he's an even-keeled gentleman.

Loeffler has evolved in a number of capacities since arriving on campus in August of 2011. A former junior college student at Des Moines Area Community College, the exercise science major experienced a case of culture shock.

“Being at a junior college my first two years of college I did not learn too much about time management with my school work. Coming to Valpo and being thrown directly into the fire of a private school’s education, I was a little unprepared to say the least. Last year I just did not know how to go about studying for things and I never really figured it out,” Loeffler said.

Just as he has in the batter’s box, the Burnsville, Minnesota native made adjustments.  Loeffler enlisted the help of Lisa Woodson, wife of head coach Tracy.  The two established improved study plans and determined how to best prepare for a heavier workload in the classroom.

“After teetering on the brink of ineligibility twice, I knew that I needed to make a change in my study habits. This year I began to write things down in a planner and keep in regular contact with my teachers to make sure I was up to date with all my assignments. I set aside times after practice where I would sit down and finish whatever studying or homework I would need to get done,” Loeffler said.

The senior took the changes to heart. With a plan and a revamped outlook, he scored a 3.12 grade-point average last fall.

While Loeffler needed no adapting at the plate his first year at Valpo, it’s what was on his plate that made him uncomfortable.

When traveling on the road, the lowest-bidding pizza parlors and sports bars are often awarded business. Meals rich in fruits and vegetables are as scarce as the unassisted triple play.

The effects became visible; by the end of the 2012 season, there was more of John Loeffler to appreciate than the previous fall.

“Stepping on the scale after coming home from the Gary Regional and seeing 225 pounds really scared me. I was only 27 pounds away from where I was my sophomore year of high school and I knew that was not where I wanted to head. I knew that I had to go back to counting calories, which is what I did throughout high school. Believe it or not, I have actually been very good at watching what I put into my body ever since my sophomore year of high school. For some reason, I lost sight of that last year.” Loeffler said.

Loeffler shed a remarkable 72 pounds in high school so while the task would be daunting, it was a familiar one. Already astute in exercise theories, he educated himself on the diet half of the health and wellness equation.

“I started doing some research on nutrition and read a lot of stuff about cutting grains, wheat, cereals and so forth from the diet and increasing my fruits, vegetables, and meat intake. I decided to try it for the summer. After just a few weeks, I could tell that I had a ton more energy than I did throughout the season when I was eating a bunch of refined and processed grains. I ended up dropping roughly 35 pounds,” Loeffler recalls.

A clubhouse that often mirrors a fraternity smorgasbord littered with pizza boxes and greasy French fry containers from a favorite local gyro stand is now spurned in favor of a can of tuna or grilled chicken and steamed vegetables. Salads have been substituted for cheeseburgers on the menu.

Loeffler has stayed disciplined since his second significant weight loss. He’s even swiped two bases this season, an act that would’ve drawn sarcastic cheers and knee-slapping from the peanut gallery a year ago.

What he lost in body mass, Loeffler gained in self-esteem. As is typically the case in those who have experienced weight loss, he enjoyed a higher energy level and a better image of himself.

Per tradition, the Valparaiso baseball team holds an in-house talent show every year. The performances have ranged from parodies of current players and coaches, to reciting movie sequences, to (feebly) attempting rap music.

As part of the 2012 show, Loeffler - a newcomer at the time - recited a story he wrote about the team. The guy who admitted to having a morbid fear of public speaking shook like a Parkinson’s patient throughout the wit-laced “poetic monologue.” Caught slightly off-guard, the audience reacted with unanimous applause to one of the better acts of the day.

“I really don't know why I was so nervous speaking in front of my own team, but I'm going to assume it was because of my lack of confidence when the spotlight was directed toward me,” Loeffler said.

Now, the senior is less guarded when talking with teammates or even the media. Though still soft-spoken by nature, he doesn’t hesitate to speak up when need be. Whether it be a player loafing during practice or not running out a pop up in a game, Loeffler takes his status as senior seriously.

“Losing some weight this summer and really focusing on what made me happy in life definitely made this huge change for me. I became a lot more confident in myself and around others and I just feel a lot more energetic and comfortable when others’ eyes are on me,” Loeffler said.

Despite evolving personal changes throughout the past two years, Loeffler’s game has remained constant.

In 102 starts as a Crusader, Loeffler has reached base in 95 games. He is the only active player to have more walks than strikeouts in a career.

“Obviously, I would love to get into plus counts and get base hits every single time I am up to bat, but I realize that isn't going to happen. I take pride in the fact that when I am up to bat, I am most likely going to give you a quality at-bat and at least get done what needs to be done. Often, hard hit productive outs are overlooked but it helps teams win ball games,” Loeffler went on to say.

He finished 2012 with a .400 on-base percentage while leading the team in doubles (18). He leads the team in walks this season and is third in extra-base hits.

With a .299 batting average, it’s difficult to overlook his productivity. A .418 OBP and 37 runs batted in are both in the top five in the Horizon League. A training room that can best be described as claustrophobia-inducing this spring, Loeffler has represented dependability in the middle of the order.

The conference tournament looms. Back-to-back NCAA Regional appearances are at stake. But Loeffler insists on focusing on the process, rather than the prize.

“Every single game we play, I want to win. I don’t really look ahead toward the Conference Tournament or what seed we will be, or anything like that. I just look toward the next game we have ahead of us and I want to win by 50,” Loeffler said.

Eventually, the 2013 season – and, consequently, his playing career - will conclude. Giving back to the game is in the plans for Loeffler. Coaching, hitting lessons, and player evaluations await him back home in Minnesota.

Considering his ability to make adjustments, the transition to life after baseball should be a piece of cake for John Loeffler. Low-fat, gluten-free cake, of course.