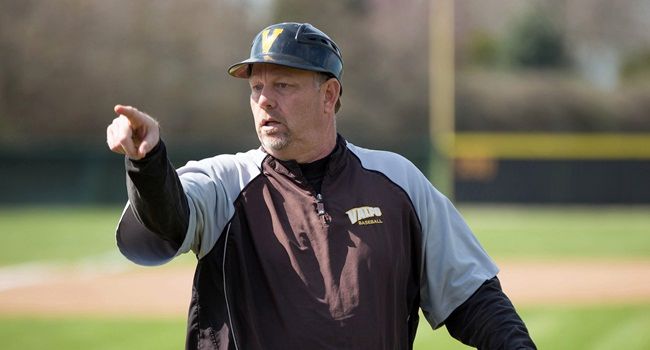 Tracy Woodson spent the last seven years as the head coach of the Valpo baseball program.

Valparaiso University director of athletics Mark LaBarbera announced today that Tracy Woodson has stepped down as the head coach of the Crusader baseball program in order to accept the same position at Richmond.

"On behalf of the university, I would like to thank Tracy for all his efforts to restore the Valparaiso baseball program back to its traditional standard of excellence," said LaBarbera.  "Under his leadership, the program has reached all of the goals that we set out to accomplish when he came on board.  I'm pleased that we now have a baseball program that is competitive on a national level, and our intent is to move quickly to put new leadership in place, so that the program can maintain the momentum it's built up over Tracy's seven seasons at Valparaiso."

Woodson spent seven seasons as head coach of the Crusaders, recording 187 victories at the helm of the Valpo program.  The 2012 Horizon League Coach of the Year, Woodson guided the Crusaders to the league regular season crown in 2012 and back-to-back tournament championships in 2012 and 2013.  Valpo advanced to the NCAA Tournament in each of the past two seasons, a spot it hadn't reached since 1968, and defeated Florida in this year's NCAA Tournament for the program's first Division I regional victory since 1966.

“I want to thank everybody at Valparaiso University, especially director of athletics Mark LaBarbera, for the opportunity to spend the last seven years as head coach of the Crusader baseball program,” said Woodson. “It was a great experience and we were able to accomplish some tremendous achievements. I'm excited for the Valpo baseball program going forward into the future with the foundation of success we were able to build.”

Under his guidance, the Brown and Gold recorded ten First Team and 14 Second Team All-Horizon League selections in Valpo’s first six years in the league.  In addition, Woodson had 14 All-Newcomer Team picks and 20 Crusaders named to the Horizon League’s All-Tournament Team, including Mark Johnson and Karch Kowalczyk, the tournament's Most Valuable Player in 2012 and 2013, respectively.

Five Crusaders were selected in the Major League Baseball draft during Woodson's tenure at Valpo.  Kyle Gaedele became Valpo’s highest draft pick ever after being chosen in the sixth round, number 203 overall, by the San Diego Padres in 2011.  Designated hitter/closer Dallas Cawiezell was selected in the summer of 2007 and signed with the Cleveland Indians.  In 2010, pitcher Bryce Shafer was drafted by the Chicago Cubs while Bo McClendon was a pick of the Detroit Tigers, marking the first time since 1969 the Crusaders have had two players selected in the same draft.  Most recently, Tanner Vavra was chosen by the Minnesota Twins in the 2013 draft.