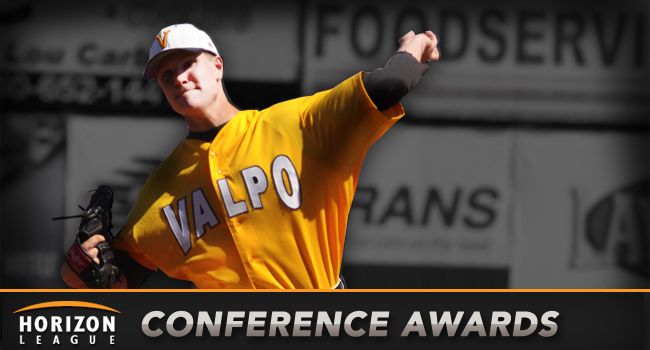 Sophomore Dalton Lundeen (Streamwood, Ill./Streamwood) was rewarded for a thorough season on the hill as he was elected Co-Pitcher of the Year alongside Wright State's Joey Hoelzel. Lundeen, whose clash with mononucleosis kept him out of the rotation until March 4th, posted a league-leading 2.17 earned-run average in 74 2/3 innings pitched. Opponents batted just .238 against the left-hander, and seven of his eight starts in league play were quality starts.

As equally impressive were Lundeen's strikeout-to-walk numbers. His 5.60 overall strikeout-to-walk ratio is currently 24th in the nation (best in the Horizon League), and the southpaw accrued 48 K's to just seven walks during conference play. Furthermore, his 1.03 WHIP (walks plus hits per inning pitched) was also a Horizon League watermark. Lundeen is the third different Crusader hurler in the last five years to earn Pitcher of the Year (Bryce Shafer, 2010; Kevin Wild, 2012) distinction.

Joining Lundeen on the Horizon League's First Team is senior Michael Morman (Rockford, Ill./Boylan Catholic). Morman led the Crusaders with a .304 batting average and was a perfect 19 for 19 in stolen base attempts. His 10 doubles also paced the Brown and Gold offense.

No stranger to postseason accolades is senior Chris Manning (Lake Forest, Calif./El Toro). A member of the All-Newcomer Team in 2011 as a freshman, a Horizon League Second Team outfielder in 2012, an HL First Team recipient last season, Manning was voted to the Second Team in 2014. The nomination comes on the heels of a May where the four-year starter etched his name in numerous offensive categories within the Valparaiso University baseball record book. The senior will finish his career as the Crusaders' all-time leader in both at-bats and runs scored. Manning projects to finish second in Valpo history in hits, second in stolen bases, and amongst the top six in RBIs and top ten in walks. He has started all but one game (255) in his four seasons with the Brown and Gold.

Pitchers Mario Losi (Anaheim, Calif./Canyon) and Ellis Foreman (Round Rock, Texas/Stony Point) were both named to the All-Freshmen Team.

Losi accumulated a 3.76 ERA in 55 innings for the Crusaders. Since returning from a hamstring injury suffered in early April, the right-hander has a win and a 2.89 earned run average to go with an opponents' batting average of .224.

Foreman finished off the regular season with three wins to accompany a 5.48 earned run average. He struck out 36 batters opposite 14 walks in 64 innings on the bump. Foreman delivered one of the most dominant starts in recent history when he struck out eleven Wright State Raiders over nine shutout innings at Nischwitz Stadium on May 11th.