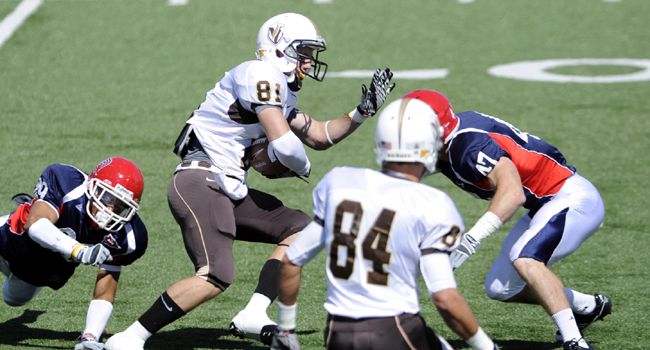 Valparaiso wrapped up non-conference play on Saturday afternoon suffering a 49-14 loss to Duquesne at Rooney Field in Pittsburgh, Pa.

Nick Malantis (Alpharetta, Ga./Alpharetta H.S.) threw his first two collegiate touchdown passes in relief for the Crusaders, but Valpo could not overcome the Dukes scoring on their first four possessions of the game and six of their first seven in building a lead.

Duquesne jumped on top on its first drive of the game, a 15-play, 77-yard possession capped by a three-yard quarterback keeper by Sean Patterson.  The Dukes made it 14-0 on their next possession as Connor Dixon hauled in a pass from Patterson, avoided two tacklers, and raced down the sidelines 66 yards for a score.

Larry McCoy added a one-yard touchdown run up the middle to start the third quarter and Patterson connected with Ethan Dorsey from four yards out to put the Dukes up 28-0.

The Crusaders struggled to move the football in the first half, tallying just 45 yards in the opening stanza while the Dukes registered 375 yards.

“The biggest lesson our team has to learn is to fight through adversity and we need to get 11 players to play each play to the best of their ability, and then move on to the next play and the next one,” head coach Dale Carlson said after the game.  “They can’t worry about the last play or what the score is, and that is a lesson they have to learn in order to have success.

Duquesne (2-1) registered two more scores to open the third quarter, one on a 19-yard run by Bill Bair and the other on a six-yard pass from Patterson to Isaac Spragg.

Malantis orchestrated a 14-play drive capped with a 10-yard strike to Kelvin Smarwt (Saint Petersburg, Fla./Boca Ciega H.S.) coming across the end zone from the left for a touchdown.

The hosts added one final score early in the fourth on a 16-yard sweep by Marcus Hughes before Valpo found the end zone one more time.  A 12-play, 68-yard drive was capped by Malantis’ second scoring pass of the game, this time to Dale Cook (Lake in the Hills, Ill./Jacobs H.S.).

Malantis finished the game 9-of-16 for 105 yards, all in the second half as Valpo finished the game with 188 total yards, 162 of which came through the air.  Smarwt made four catches for 44 yards while Tanner Kuramata (Rancho Cucamonga, Calif./Claremont H.S.) also had four grabs.

“Malantis made some good plays,” Carlson said.  “He did a nice job making some throws under pressure for the touchdowns.”

The Dukes finished the game with 628 yards of total offense, including 425 yards on the ground.  McCoy carried 21 times for 164 yards while Bair had 16 rushes for 154 yards.  Patterson finished the game 12-of-18 passing for 181 yards and the three scores.

Defensively, Christopher Howard (Crown Point, Ind./Andrean H.S.) led the way with eight tackles while Treadaway made seven stops, including one for loss, and had the forced fumble.

Christopher Oliver led the Dukes with nine stops, including four for loss.

“A lot of our younger players got some game reps today which, once we evaluate the film, we may find need to play more,” Carlson concluded.

Valparaiso (0-3) will have a week off before returning to action on Oct. 1 at Brown Field for Homecoming.  The Crusaders will face Morehead State beginning at 1 p.m.

Game Notes: This was the first meeting between the two schools … both Smawt and Cook made their first touchdown receptions of their careers … Valpo was penalized just twice on Saturday and has committed just four penalties in the last two games … the Crusaders did not commit a turnover against the Dukes … Greg Wood (Libertyville, Ill./Libertyville H.S.) had seven punts for a 43.7 yard average, landing three inside the 20-yard line and had a long of 57 … 10 different Crusaders caught passes in the game.