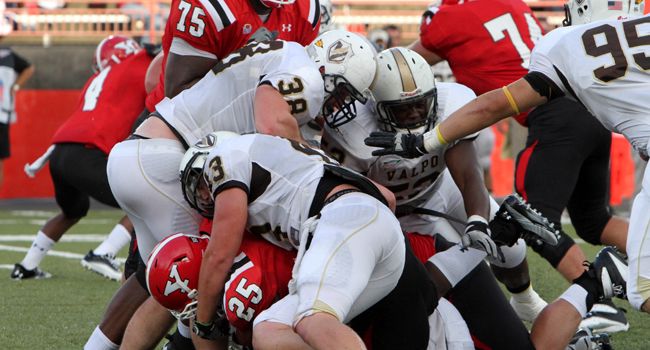 This Week in Crusader Football: Valparaiso remains home at Brown Field this Saturday afternoon as the Crusaders welcome one of the Pioneer Football League’s co-leaders to town.  The Crusaders will battle San Diego beginning at 1 p.m. before taking to the road for the next two games.

On the Air: For the seventh straight season the Valpo Sports Radio Network will be home to all 11 Crusader football games in 2010.  The Valpo Sports Radio Network consists of WAKE (1500-AM, Valparaiso), which will carry every game all season long along with WJOB (1230-AM, Hammond), which will carry select games.  Todd Ickow will handle all the play-by-play with Keaton Gillogly adding the color commentary this week.  The game can also be heard live online at www.valpoathletics.com.  Live stats will also be available for the game through www.valpoathletics.com.

Head Coach Dale Carlson: Dale Carlson is 0-15 in his second season with the Crusaders and 110-118-3 overall entering his 23rd season as a collegiate head coach.  He arrived at Valpo from Ohio Dominican where he began the Ohio Dominican program from scratch in 2004, just as he did at Tri-State University prior to his tenure with the Panthers.  He is the 16th head coach in Valpo history, and just the seventh since 1946.

Series Notes: San Diego leads the all-time series with the Crusaders 13-5 dating back to 1993 and has won seven straight meetings between the two schools.  Last year the Toreros were 30-10 victors over Valpo in California.  The last Crusader win against San Diego came on Oct. 18, 2003, a 41-34 triumph at Brown Field.  The Toreros hold a 6-3 advantage in the all-time meetings in Valparaiso.

Wrapping Up Morehead State: Twenty-eight unanswered points in the second and third quarters proved to be the difference last Saturday afternoon as the Eagles defeated the Crusaders 38-14 at Brown Field.  Zach Lewis threw for four touchdowns and 335 yards for Morehead State to lead their offense which totalled 555 yards on the day.  Eric Hoffman tossed two touchdowns for Valpo, one to Cole Anderson and another to Kevin Becker.  John Edwards made 16 tackles to lead the Crusader defense.

Scouting San Diego: The Toreros have won two straight games after shutting out Davidson 42-0 last Saturday at home.  San Diego is averaging 33 points per game and have scored 40 or more in three of its four victories.  Quarterback Mason Mills is seventh in the country in passing efficiency (158.41) and has thrown for 1,218 yards and 14 touchdowns already this season.  Kenny James has rushed for 441 yards while three different receivers have at least 300 yards worth of catches.  Defensively, Zach Dunaj is the team’s leading tackler with 33 while Blake Oliaro has 6.5 tackles for loss.

Anderson Comes Up With Big First Reception: Freshman Cole Anderson’s first collegiate reception was a big one, a 10-yard scoring grab in the first quarter against Morehead State last Saturday to tie the game at seven.  Anderson finished the game with four catches for 40 yards against the Eagles.

McCarty Nearing 1,000 Career Yards: Sean McCarty made a 53-yard reception last Saturday to help set up Valpo’s second touchdown, and continued to move closer to 1,000 yards receiving for his career.  The fifth-year senior enters Saturday’s game against San Diego with 909 receiving yards.  This year his 143 receiving yards lead the Brown and Gold.

Ali-El Has Career Game: Gabe Ali-El had his best game in his brief collegiate career on Saturday, carrying 12 times for a season’s best 67 yards, averaging 5.6 yards per rush.  He had a long run of 22 yards as well, matching his season-best.

Edwards Brings Them Down: John Edwards entered the Morehead State contest with eight career tackles.  The freshman led the way for the Crusaders with 16 tackles on the day, including 13 solo stops starting at one of the cornerback spots.

Gokan Racks Up Double Figure Tackles Again: Cody Gokan made 12 tackles for the Crusaders on Saturday against Morehead State, the fourth time in the last two-and-a-half years that he has recorded 10 or more stops in a game.  Gokan’s career high of 17 tackles came at Western Illinois last season.  This was Gokan’s highest tackle total of his career at home.

Sharing the Wealth: Eight different Crusader receivers caught passes last week against Morehead State.  On the season, 15 different Valpo players have caught at least one pass, with 13 of the 15 having at least two receptions on the year.

Passing Offense Among Nation’s Leaders: Valparaiso ranks 27th among all NCAA I-FCS schools averaging 252.0 passing yards per game this season.  Crusader quarterbacks have completed 55.4 percent of their passes this season for 1,008 yards in four games.

Finally Getting to the Quarterback: After not recording a quarterback sack in the first three games of the season, the Crusader defense registered three last Saturday at Brown Field against Morehead State.  Nikko Carson had a pair of sacks, giving the senior 10 for his career.  Bruce Collins also added his first collegiate sack in the game.

A Strong Leg: Greg Wood, a First Team All-Pioneer Football League punter one year ago, is averaging a league-leading 41.8 yard per kick average over his 34 punts this season.  The junior had a long of 63 yards against Franklin, and has already has six 50+ yard kicks on the season.  He has landed nine kicks inside of the 20-yard line for the year.  For his career Wood averages 43.0 yards per punt.  Wood has had at least one 50-yard punt in 12 of his 14 collegiate games.

Behaving Themselves: Valpo ranks second in the PFL averaging just 36.8 yards in penalties per contest.  The Crusaders have been whistled for infractions just 19 times (4.75 per game) this season for 147 total yards.

Halfway There: Valpo is three quarters of the way to the total offensive scoring output from the entire 2010 season in just four games.  The Crusaders tallied 100 total points one year ago and have already lit up the scoreboard for 76 this year.  The scoring average has more than doubled to 19.0 points per game this year while scoring just 9.1 points per contest one year ago.

Racking Up the Offense: Valpo tallied 463 yards of total offense in the season opener against Franklin, marking the Crusaders’ highest offensive output since the Brown and Gold rolled up 469 yards at Drake on Sept. 29, 2007.

This and That: Valpo has converted 60% (6-of-10) of its fourth down attempts ... Greg Wood ranks 22nd nationally averaging 41.8 yards per punt ... Pat Derbak ranks third in the Pioneer Football League averaging 8.5 tackles per contest ... Valpo will be wearing pink bicep bands during Saturday’s game in support of Breast Cancer Awareness month.