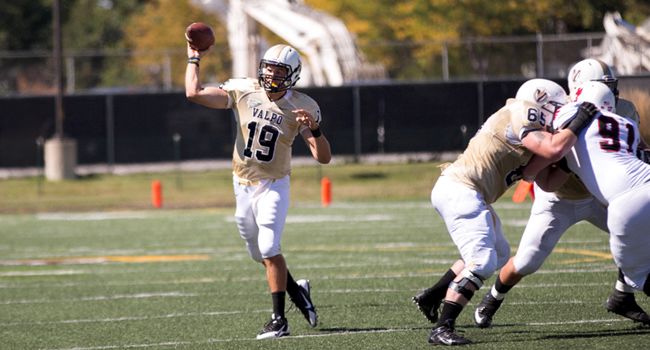 Eric Hoffman (Manitowoc, Wis./Lincoln) turned in a career day at Brown Field but a scoring lull in the middle quarters hamstrung the Crusaders Saturday in a 36-34 defeat to William Jewell. Hoffman finished the afternoon completing 36 of 55 pass attempts for 495 yards and four touchdowns.

From the end of the first quarter to the nine-minute mark of the final stanza, the Crusaders went a little more than 38 minutes between scores. Meanwhile, the Cardinals rattled off 26 unanswered points. Valpo answered with three touchdowns in the latter stages of the fourth quarter, but William Jewell recovered an onside kick in the waning moments of the home opener to end Valpo's comeback attempt.

"We've got to play for 60 minutes, and I think that's the key. Last week we played for probably 58. This week, I'm thinking we played for maybe 30. We really didn't play like we needed to, especially in that second quarter," head coach Dale Carlson said.

After electing to receive the opening kickoff, Hoffman led an early air attack on the Cardinal defense. The redshirt junior quarterback utilized an arsenal of receivers, connecting with four different teammates for one reception each. A 10-yard completion to running back Jake Hutson (Blanchard, Mich./Montabella) on the first play of the game was augmented by a 15-yard facemask penalty on William Jewell. With the ball at midfield, Hoffman hooked up with Fred Gladney (Milwaukee, Wis./Dominican) for a 28-yard pass that established the Crusaders on the outskirts of the red zone. A sideline completion to Kent Warren (Mission, Tex./Veterans Memorial) moved Valpo inside the Cardinal 20 to the 19-yard line. Warren went down on the play and did not return. After a pass attempt to Gladney went for naught, Hoffman found Andrew Cassara (Mokena, Ill./Aurora Christian) on the left side of the endzone for a touchdown. Sophomore Josh Young (Lemont, Ill./Lemont) converted the PAT to give the home team an early 7-0 advantage. The six-play, 75-yard drive elapsed just 1:21 off the clock.

The Cardinals responded on their first offensive drive with a meticulous 15-play, 88-yard drive of their own. Running back Thomas Cook Jr. broke away for a 27-yard touchdown run to tie the game with just over six minutes in the first quarter.

The Crusader offense had its way with the Cardinal defense on its second drive of the game. Hoffman and Gladney had more fun at the expense of the William Jewell secondary as a 47-yard passing play on 3rd and 10 set the Crusaders up nicely in enemy territory. Sticking with the passing game, Hoffman tossed an 18-yard completion to recently-converted receiver Steve O'Bryant (Chicago, Ill./Tinley Park [Carthage]). The catch set up the Valpo offense at the William Jewell two-yard line. Hutson pushed the pile forward on 3rd and goal from the 1 to put the Brown and Gold back on top. Jacob Newman (Lawrenceburg, Ind./Lawrenceburg) was called on for the PAT, but the kick was blocked to keep Valpo's lead at 13-7.

The Crusader lead lasted only 20 seconds as Cook Jr. recorded his second rushing touchdown of the quarter, a 73-yard run on the first play from scrimmage. Warren Frevert's extra-point kick gave the Cardinals their first lead of the afternoon. Cook Jr. ended the day with 175 rushing yards on 22 carries.

The 14-13 William Jewell lead held up at the end of the first quarter.

Both defenses settled in during the second quarter. Valpo was backed up deep in their own end with under five minutes in the first half when faced with a 4th and 12. Redshirt freshman Alex Kozlowski (Novi, Mich./Detroit Catholic Central) had his cleats in the brown turf as a punt attempt went off the right side of his foot and out-of-bounds at the Valpo 26-yard line. Endowed with excellent field position, the Cardinals constructed a seven-play drive to extend the visitor's lead to 20-13. Nate Egharevba provided the exclamation point with a one-yard touchdown catch from QB Sean Shelton with 21 seconds to go in the half.

The Crusaders went into halftime trailing by that 20-13 score.

On their first possession of the second half, the Cardinals struck quickly again. Shelton slung a touchdown pass to Chris Smith on the second play following the intermission. The extra point gave William Jewell a 27-13 lead with a tick under 14 minutes to play in the third quarter.

The Valpo offense reawakened in the fourth quarter. Hoffman dished out a TD pass to Gladney which snapped William Jewell's run of 26 consecutive points with 9:13 to play. Down 33-20, the Valpo defense subsequently forced a three-and-out on the next Cardinal possession.

Hoffman got right back to work on the ensuing drive. He hit Tanner Kuramata (Rancho Cucamonga, Calif./Claremont) with a screen near the Valpo sideline. Kuramata flashed breakaway speed as he was off to the races to bring the Crusaders within one possession, 33-27.

William Jewell ate some clock on its next drive, running nine plays before Frevent nailed a 42-yard field goal to push it back to a two-score game with 3:12 to play.

Hoffman led another march downfield as a one-yard touchdown pass to freshman Denzell Conway (New Orleans, La./MICDS (Mo.)) put the cherry on top of an 11-play, 78-yard drive that took just two minutes and 16 seconds. Newman's extra point made it a 36-34 game with 0:51 remaining. During that drive, Hoffman eclipsed David Macchi's single-game passing yard mark of 452 yards set in 2003. In addition, Hoffman also broke his own record for completions in a game. He had recorded 34 at San Diego last season.

An onside kick attempt was recovered by William Jewell before a pair of kneels clinched the victory for the visiting Cardinals.

Gladney also enjoyed an outstanding game. The junior reeled in ten catches for 183 yards and a TD.

"We're not here to break records. We're here to win games. That's what I want to do," Hoffman said after the game.

Valparaiso (0-3) will have two weeks to prepare for the Campbell Camels on Saturday, Sept. 28th as Pioneer Football League action begins for the Crusaders. Saturday's game will be a part of homecoming festivities at Brown Field. Kickoff is scheduled for 1:00 pm.

"I expect our guys to be down and that's natural. But they'll bounce back. We had a really good week of practice this week and I anticipate that they know there's a lot of football to be played," Carlson concluded.