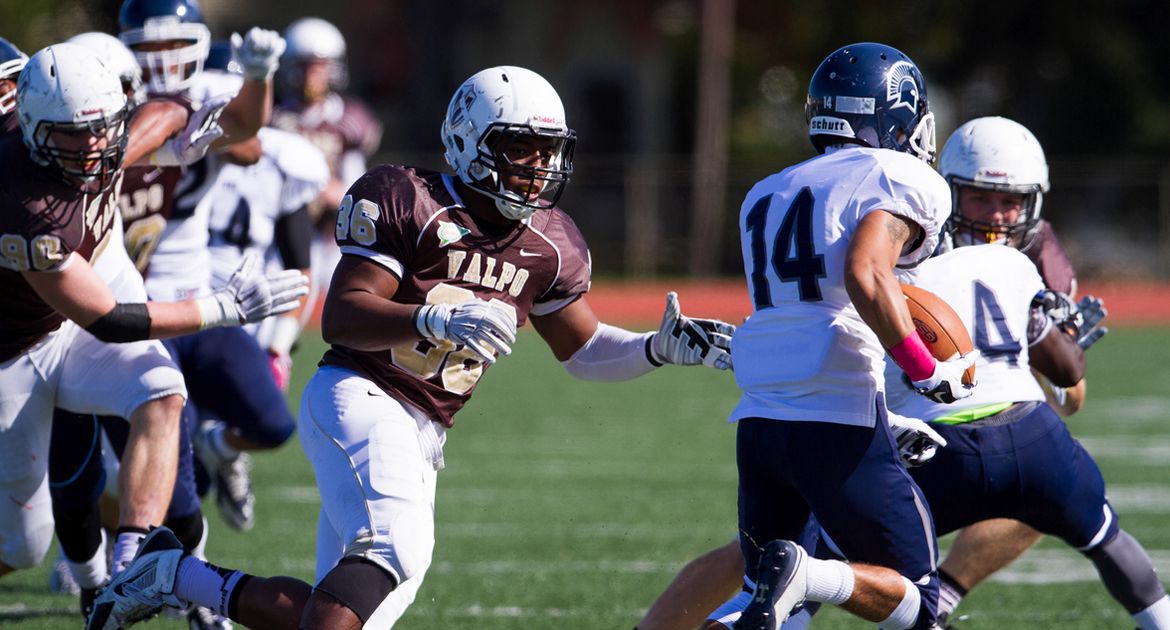 This Week in Crusader Football: The Crusaders hit the road for the first time in 29 days as they head to the Bluegrass State to take on the Morehead State Eagles. The last four meetings have all been shootouts with Valpo and Morehead State combining for no fewer than 52 points. Their 2012 tilt produced the highest aggregate point total (100) since Sept. 14th, 1985. The Eagles have surrendered at least 31 points in all seven of their games so far, including four contests of 40 points or more. Meanwhile, the Crusader defense is coming off seven and 17-point efforts, respectively.

On the Air: For the ninth straight season, the Valpo Sports Radio Network is home to all 12 Crusader football games in 2014. All 12 games can be heard live on WVUR (95.1FM, Valparaiso), online through www.valpoathletics.com. Todd Ickow will handle all the play-by-play, with Brad Collignon adding the color commentary this week. Links to the video, audio, and live stats will also be available through www.valpoathletics.com.

Head Coach Dave Cecchini: Cecchini is 2-5 in his first year at Valparaiso. His first head coaching win came on Sept. 20th, 2014 when the Crusaders defeated William Jewell 39-30. Cecchini most recently served as offensive coordinator/quarterbacks coach at Lehigh where the Mountain Hawks captured a Patriot League Championship in 2010. His path to Valpo also included stops at Harvard and The Citadel, where he mentored QB Ryan Fitzpatrick and WR Andre Roberts to eventual professional careers. While Cecchini made a name for himself as offensive coordinator at Harvard in 2003, the Crimson compiled the fourth-best offense in the nation en route to an undefeated 10-0 season and an Ivy League Championship. Furthermore, The Citadel set 16 offensive records under his tutelage. As a receiver at Lehigh, Cecchini garnered All-American honors and established numerous single-season school and Patriot League records.

All-Time Series: Morehead State leads the all-time series over Valparaiso, 16-3, including seven consecutive victories over the Brown and Gold. The Crusaders last win over the Eagles came on Sept. 16th, 2006 when they won a 42-35 tilt at Jayne Stadium. In the history of the series, Valpo is 2-6 versus Morehead State on the road.

Scouting Morehead State: Despite less than stellar defensive numbers, it’s important to note Morehead State’s strength of schedule through its first seven games. The Eagles opened the season with two ranked opponents in their first three weeks (#20 Richmond, 8/30; #25 Eastern Kentucky, 9/13). MSU’s league schedule was hardly a tonic, either. While the Eagles did open versus a Davidson squad that went winless in 2013, Campbell, Jacksonville, and Dayton are all undefeated in PFL play. Furthermore, each of the aforementioned squads represent the top four offenses in the PFL. The Eagle defense looks for a correction as the Crusader offense enters Saturday’s matchup 11th in the league in scoring offense at 13.3 points/game.

Sophomore Austin Gahafer was one of the few quarterbacks who returned experience in the PFL this season. The Louisville native rattled off four consecutive games of 270 passing yards or more from Sept. 6th-Oct. 4th, however Jacksonville limited him to just 40 yards on six completions in Week 7 and Dayton held Gahafer to 155 yards through the air last week. Rees Macshara and Lawrence Jones handle the rushing attack for Morehead State. Macshara has amassed 348 yards on 85 carries while Jones has averaged 4.0 yards per rush on 47 touches. Jake Raymond, Cyrus Strahm, and Tanner Napier are all talented targets for Gahafer. Raymond snagged 12 passes for 133 yards versus Valpo last October at Brown Field. Gahafer racked up 52 pass attempts and 458 passing yards (both season highs for an opponent) in the 42-28 Morehead State victory

Linebacker Luke Keller, defensive end Ronald Cooper, and safety Mike Jackson anchor a Morehead defense in search of its stride. Keller leads the Eagles with 49 tackles while Cooper has held up his end of the bargain with eight tackles for a loss and four sacks. Out of the secondary, Jackson leads MSU with two interceptions and four pass deflections. Valpo will have to keep an eye out for redshirt sophomore Dustin Casey, who appears to have turned a corner after a pedestrian first five games in 2014. The defensive lineman has been a monster the last two weeks, collecting 4.5 TFL, two sacks, and 12 tackles.

Head Coach Rob Tenyer: Tenyer is in his second season leading the Morehead State football program. The Michigan native took over the reins after 12 seasons as an assistant in Morehead. An Eagle through and through, Tenyer coached running backs all 12 years of those years, in addition to stints as receivers coach, strength & conditioning coordinator and equipment coordinator throughout. He also served as offensive coordinator during the 2011 and 2012 seasons after four years as recruiting coordinator. During his playing days, Tenyer was a four-year letterwinner at Olivet College (Mich.) where he was elected team captain his senior season.

That’s Odd: The Crusaders have a +18 point differential in the 1st and 3rd quarters, but a -67 mark in the 2nd and 4th quarters.

There Goes the Neighborhood: The Eagles have an average attendance mark of 6,833 over their first three home games.