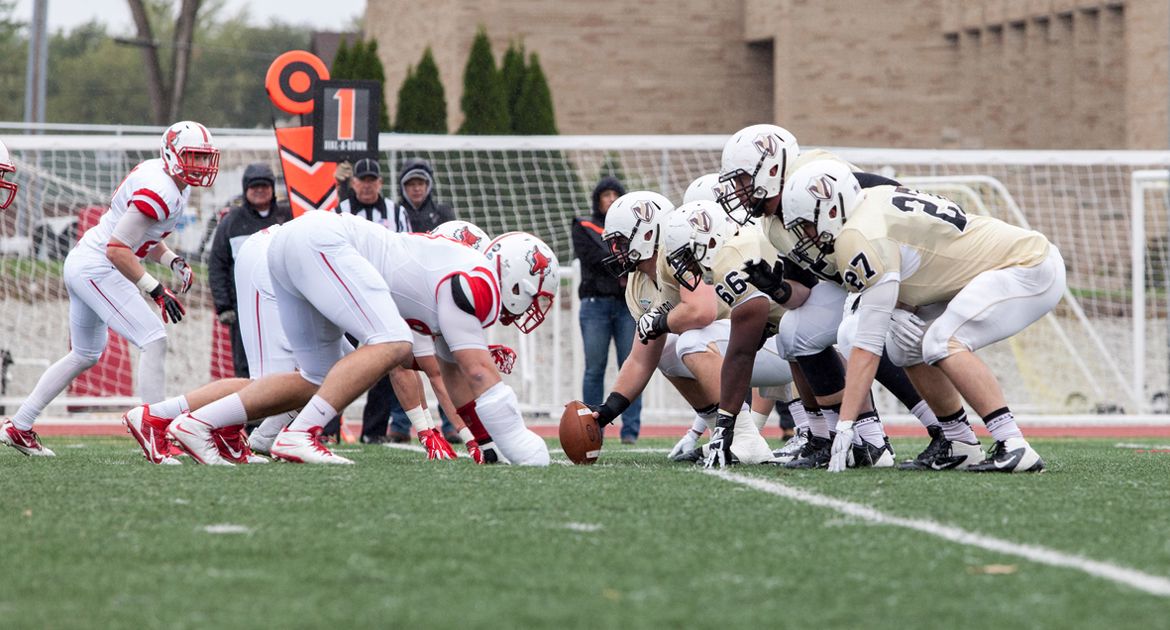 Big plays have haunted the Eagle defense for much of 2014 and Hall reinforced that notion with a 38-yard touchdown run on the Crusaders' second drive of the afternoon. Meanwhile, the Crusader defensive unit stepped up early against a Morehead State offense that entered Saturday's tilt averaging 400 yards of offense per game. The Eagles were not only shutout in the first quarter, but they snapped just four plays in Valpo territory throughout the opening stanza.

A Jacob Newman (Lawrenceburg, Ind./Lawrenceburg) 33-yard field goal with 1:31 remaining in the first quarter gave the Crusaders a 10-0 lead. The scoring drive was set up on a beautiful 61-yard passing play from Ben Lehman (Elgin, Ill./Saint Edward Central Catholic) to Kent Warren (Mission, Texas/Veterans Memorial) on a 2nd and 9 from the Valpo 27.

The Eagle offense finally awoke in the second quarter.

Rees Macshara registered a 12-yard touchdown run on the first play of the quarter. A Luke Boyd extra point put Morehead State to within a field goal, 10-7.

The Crusaders answered right back with a meticulous 12-play, 84-yard drive that saw the Brown and Gold convert three third-down attempts. Lehman put the ball right in Grayson Bastin (Fort Wayne, Ind./Homestead)'s hands on a 3rd and 2 for a 34-yard completion. Lehman finished off the drive with a three-yard rope to Fred Gladney (Milwaukee, Wis./Dominican) for the senior's first touchdown of the season.

Morehead State quickly responded with a three-play, 65-yard surge that took less than a minute. Quarterback Austin Gahafer fired the first of his three touchdown passes of the day to Tanner Napier. Napier’s 26-yard TD snag brought the Eagles to within ten, 24-14. It remained a ten-point game heading into halftime. The Crusaders controlled the ball for nearly nine and a half minutes in the second quarter.

The Brown and Gold needed only two plays to maneuver 65 yards into the end zone on their opening possession of the second half. Lehman and Gladney flipped the script as a double-reverse left the Crusader quarterback wide open near the sidelines for a 21-yard touchdown. The play, which gave Valpo a 30-14 edge, represented the first career passing touchdown for Gladney and the first receiving score for Lehman. Newman’s extra-point attempted sailed over the right upright and was ruled no good, keeping it a 16-point contest.

Gahafer led the Eagles downfield on a five-play, 65-yard drive that culminated in a 38-yard TD pass to Jake Raymond. Boyd made it 30-21 with the point after.

On the ensuing kickoff, Jarrett Morgan showed why head coach Dave Cecchini wants the ball in the true freshman’s hands more frequently. Morgan scooped up the kickoff at the nine-yard line before he bobbed and weaved through traffic for a 91-yard touchdown return. It represented his second TD return in the last two weeks. The Crusaders led 37-21 at that point.

Valpo made Morehead State work for its next score. The Eagles drove 60 yards on ten plays before Brandon Bornhauser broke through with a six-yard touchdown carry.

The Morehead State defense held the Crusaders out of the end zone on their following drive. Valpo marched down to the Morehead 13, but managed no farther and settled for a 37-yard field goal. Newman’s seventh field goal of the season gave the Brown and Gold a 40-28 edge with just over five minutes to play in the third period.

The tenacious Eagle offense had a response for every Crusader score, though. Gahafer concluded a seven-play drive with an eight-yard touchdown pitch to Justin Cornwall, making it a 40-35 tilt. Morehead State accumulated 100 rushing yards and 120 yards through the air in a stanza that saw 16 first downs, 315 yards of total offense, and 37 points.

Hall’s second rushing touchdown of the afternoon came at the 7:36 mark of the fourth quarter and ended an 11-minute scoreless span. The drive required 14 plays to move 84 yards while eating six and a half minutes of clock. Morgan was involved on two crucial plays on the possession: a 16-yard run that thrust Valpo into Morehead State territory, and a four-yard completion on a 3rd and 3 at the MSU 19.

The Eagles also slowed the tempo up a bit as they launched a 13-play, 73-yard possession that elapsed just under four and a half minutes. Raymond got the call and crossed the plane to push Morehead State to within 47-42.

With 3:09 left to play, Morehead State head coach Rob Tenyer opted to pooch an onside kick over a wall of Crusader special teams players. MSU’s Eric Pugh beat Hall to the loose ball and the Eagles took over on the doorstep of Valpo’s red zone. Alex Green (Zionsville, Ind./Zionsville Community) shook Gahafer on a 2nd and 11 to create a 3rd and long at the Valpo 29. Up five with just over two minutes to play, the Crusaders appeared to seal the deal when A.J. Bradley (Washington, D.C./Friendship Collegiate Academy) picked off a pass intended for Raymond.

The Eagles were forced to burn two of their timeouts following three and four-yard rushes from Hall. Faced with a 3rd and 3 from his own 34, Lehman held on to the ball for a QB keep that MSU safety Mike Jackson sniffed out. Lehman was pushed back for a four-yard loss and the Crusaders were forced to punt.

A block in the back on the aforementioned punt went unpunished and Morehead State began its game-winning drive on its own 42-yard line.

A 22-yard pitch and catch from Gahafer to Bornhauser moved the chains to the Valpo 30. The two reversed roles on the following play – just as Lehman and Gladney did earlier – and the result was an 18-yard completion down to the 12-yard line.

Three plays later, with the clock winding down under 20 seconds, Bornhauser took a direct snap and shoved forward four yards into the end zone, completing the comeback and giving MSU a 48-47 lead. The two-point conversion was unsuccessful.

Luke Boyd’s impending kickoff went out of bounds and the Crusaders opened shop on their own 35-yard line with 17 seconds remaining. Lehman’s hail mary attempt ended up in the hands of safety Dominic Iori, squashing any chance of a last-second Crusader comeback as Morehead State held on for a 48-47 victory in front of 3,583 fans.

“We were one offensive, defensive, and special teams play away from winning this game. It hurts to lose this game for the seniors, but there were a lot of positives today,” Cecchini said after the game.

J.J. Nunes (Baltimore, Md./Baltimore Lutheran) had his best game in a Crusader uniform. The sophomore safety made off with a game-high 15 tackles, six of which were solo. Green finished with a dozen tackles. It marked the fourth time in the last five tilts that the junior captain has amassed double digit stops. Sophomore Charles Carter (Gary, Ind./Calumet) was active all afternoon as he registered ten tackles.

Hall broke the 100-yard plateau for the second time in the last three weeks. The junior tallied 120 yards on 22 touches including two scores.

Lehman’s eleventh hour heave was the senior’s only miscue. He finished 13-of-21 for 224 yards including a touchdown and an interception.

Valpo (2-6, 0-4 PFL) will put this one behind them as Dayton (5-1, 3-0 PFL) awaits the Crusaders next Saturday in Ohio. Kickoff is slated for 12:00 pm CT. Links to the audio, video, and live stats are available at valpoathletics.com.