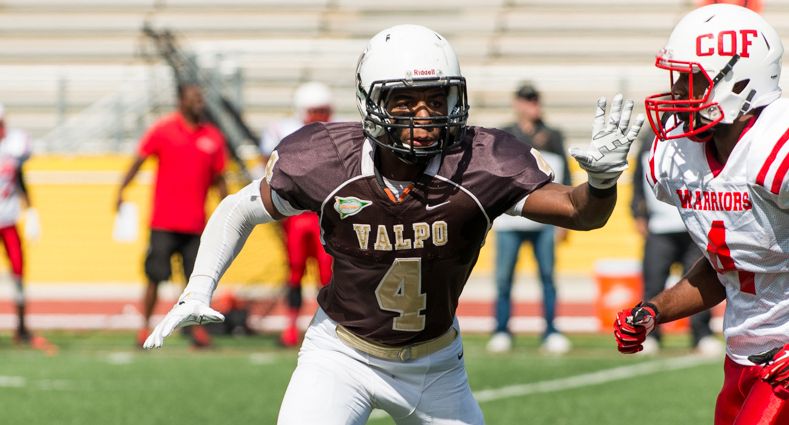 J.J. Nunes had an interception for the Crusaders Saturday.
Valparaiso at Drake | October 10, 2015

The Valparaiso University football team was unable to come out of Saturday with its second consecutive road win in PFL play, falling to Drake in Des Moines, Iowa by a 34-7 final.

Valpo looked poised to potentially take the lead on its first possession, putting together a 14-play drive, but the drive stalled just short of the red zone and the Crusaders’ field goal attempt was pushed wide left. Drake went three-and-out on its first time with the ball, but a 71-yard punt flipped the field, and the Bulldogs would take advantage of their next two possessions starting in Valpo territory. Conley Wilkins posted touchdown runs of three and four yards to give Drake a 14-0 lead.

The Crusaders had the ball in Drake territory three times during the second quarter in an effort to cut into the two-score deficit, but were unable to come out of any trip with points. A fumble thwarted the first drive, while Valpo failed to convert on fourth-down chances on either of the other two trips as the game went into halftime at 14-0.

Coming out of the halftime break, Drake scored on its first possession, as Wilkins caught a 12-yard touchdown pass from Andy Rice. Later in the quarter, Brock Reichardt scored on a four-yard run. The Crusaders snapped the shutout with 8:05 to play, as Ryan Clarke (Hopatcong, N.J./Hopatcong) hit Frank Catrine (Springboro, Ohio/Bishop Fenwick) for a 17-yard touchdown pass. Drake’s Josh Lee hit field goals of 37 and 35 yards in the fourth quarter for the final margin.

The Crusaders limited Drake (3-3, 2-1 PFL) to just 131 total yards passing, as Rice was just 12-of-28 for 114 yards and threw interceptions to J.J. Nunes (Baltimore, Md./Baltimore Lutheran) and Cody Cotton (Maywood, Ill./ Walther Lutheran). But the Bulldogs ran the ball 49 times for 205 yards, led by 59 yards and the pair of scores on the ground from Wilkins.

Valparaiso (1-4, 1-2 PFL) returns home for the first of two consecutive home games as it hosts Dayton at Brown Field next Saturday at 1 p.m. The game is slated for broadcast on ESPN3.com, with live audio and live stats available via ValpoAthletics.com as well.