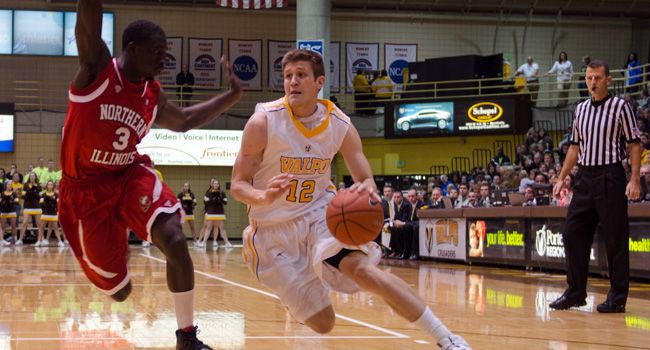 Next Up in Crusader Basketball: Valparaiso takes aim at a 3-0 start on Thursday evening as the Crusaders travel to Lincoln, Neb. to take on the Cornhuskers of Nebraska. The game can be seen live nationwide on the Big Ten Network.

Last Time Out: The nation woke up to a Valparaiso men's basketball victory on Tuesday morning, as the Crusaders started the second half on a 21-5 run to put away Northern Illinois, 69-46. The game, which tipped off just after 7 a.m., was the fifth game of the ESPN College Hoops Tip-Off Marathon and was broadcast live on ESPN. Ryan Broekhoff posted a double-double with 20 points, 16 of which came in the first half, and 13 rebounds.

Series Notes: The Crusaders and Huskers have played twice in program history, but the series history is an unusual one. Nebraska won both matchups in a three-day span, on February 28 (30-17) and March 1 (35-20), 1920, and the two squads have not played since, a span of 92+ years.

...looking back at last year
- @ValpoBasketball claimed its first @HorizonLeague regular season title in 2011-12, winning the crown by two games.
- The Crusaders earned the right to host the #HLMBB postseason tournament by winning the regular season and advanced to the championship game.
- @ValpoBasketball played at Miami in the first round of the postseason NIT, the Crusaders’ 11th postseason trip in the last 17 years.
- The Crusaders won 22 games overall in 2011-12, their 12th 20-win season in the last 19 years.
- @ValpoBasketball boasted the #HLMBB Coach of the Year (Drew), Player of the Year (Broekhoff) and a second First Team selection (Van Wijk).

...looking ahead
- @ValpoBasketball will continue play in the Joe Cipriano Nebraska Classic at Kent State on Sunday at 1 p.m.
- The Crusaders then host a four-team pod next Friday and Saturday to close out classic play.
- Chicago State, Bethune-Cookman and Nebraska-Omaha will all be at the ARC, which will host two games Friday and two games Saturday.

#WinningBig
- Valpo defeated Georgia Southern by 31 points in its opener, its largest season-opening win over a D-I school since moving to D-I.
- @ValpoBasketball has now won eight straight home openers by double figures dating back to 2004.
- Valpo led by as many as 42 points in the season-opening win over the Eagles.
- The Crusaders followed with a 23-point win over Northern Illinois on Tuesday.
- It is the 1st time Valpo has won consecutive games by 20+ points since Dec. of 2009 (Toledo by 32, Concordia [Wis.] by 26).

#EfficientOffense
- @ValpoBasketball needed just 61 possessions to rack up 85 points in its season opener against Georgia Southern.
- Valpo averaged 1.39 points/possession in the win over the Eagles, the tenth-best single-game performance this year through Tuesday's games.

#LockdownDefense
- @ValpoBasketball has given up just 100 points total through the season’s first two games.
- The 100 points is the fewest combined given up by a Valpo team in its first two games since moving to Division I.
- The Crusaders have limited their first two opponents to just 33.7% from the floor and 25.8% from the 3-point line.

@Huskers
- Nebraska enters Thursday’s game at 1-0 after defeating Southern University 66-55 in its season opener.
- The Huskers returned just 24% of their scoring and 26.7% of their minutes played from last year’s 12-18 squad.
- Nebraska is under the guidance of first-year head coach Tim Miles, who previously spent 5 years at Colorado State.
- Brandon Ubel paced the Huskers in their opening win with 21 points and 12 rebounds.
- Dylan Talley added 17 points and Ray Gallegos 16 points in the win over Southern.
- The Joe Cipriano Nebraska Classic is named after the former Huskers head coach from 1963-1980, a 3-time Big Eight Coach of the Year.

Bryce Drew
- Bryce Drew is entering his second season as head coach of @ValpoBasketball and is in his eighth season overall on the coaching staff.
- Drew was named #HLMBB Coach of the Year in 2011-12 in his first season as head coach.
- Drew was the first @ValpoBasketball Coach of the Year since 2001-02, when dad Homer won the honor in the Mid-Con.
- Drew led the Crusaders to 22 wins and the @HorizonLeague regular season title in his first year at the helm.
- Prior to coaching, Drew spent seven seasons playing professionally, including six seasons in the NBA.
- Drew was a two-time Mid-Con MVP in his playing days with @ValpoBasketball, helping the team to three NCAA tournament appearances.
- Drew hit “The Shot”, a buzzer-beating 3-pointer in the first round of the 1998 NCAA tournament, to lift the Crusaders over @OleMissMBB.

This Season
- Broekhoff opened the regular season with 14 points on 4-of-5 shooting (2-for-3 from 3-point range) against Georgia Southern.
- Broekhoff scored 16 of Valpo’s 23 first-half points in the win over Northern Illinois, ending the game with 20 points and 13 rebounds.
- Broekhoff combined for 31 points in the Crusaders’ two exhibition victories.
- Broekhoff currently ranks 13th in @ValpoBasketball history in rebounds (617), t-7th in blocked shots (74) and t-4th in 3-pointers (175).

Last Season
- Broekhoff led @ValpoBasketball, averaging 14.9 points and 8.5 rebounds per game in 2011-12.
- Broekhoff led the @HorizonLeague in rebounding and finished fourth in the league in scoring.
- Broekhoff’s total of 290 rebounds on the year is sixth-highest in a single season in program history.
- Broekhoff reached double figures in scoring in all but five games and scored at least 20 points on six occasions.
- Broekhoff tallied a team-best 12 double-doubles, all of the scoring/rebounding variety.
- Broekhoff was named MVP of the Valparaiso subregional of the @2KSportsClassic.
- Broekhoff became the 31st player in @ValpoBasketball history to score 1,000 career points, surpassing the milestone Feb. 17 at @LMULions.

Kevin Van Wijk
- Van Wijk was named a Preseason First Team All @HorizonLeague choice entering the 2012-13 season.
- Van Wijk led the Crusaders in scoring in their season opener, scoring 16 points (5-8 FG; 6-7 FT) against Georgia Southern.
- After sitting out the 1st exhbition, Van Wijk totaled 14 points and six rebounds in 15 minutes in the exhibition win over Robert Morris.
- Van Wijk is coming off a junior season where he was named a First Team All-League selection.
- Van Wijk ranked second on @ValpoBasketball in scoring (14.1 ppg) in 2011-12 and also averaged 5.2 rebounds per game.
- Van Wijk led all #HLMBB players with a 61.7% FG pct, good for fifth in the nation and third-best in a single season in Crusader history.
- Van Wijk scored at least 20 points in six games and posted a pair of double-doubles.
- Van Wijk was twice named @HorizonLeague Player of the Week (Jan. 16 and Nov. 21).
- Van Wijk was named to the All-Tournament Team at the Valparaiso Subregional of the @2KSportsClassic.

Erik Buggs
- Buggs opened the season with a career-high nine assists to go with six points in the Crusaders’ win over Georgia Southern.
- Buggs tallied seven more assists in Valpo’s victory over Northern Illinois Tuesday morning.
- Buggs currently is tied for 10th in @ValpoBasketball history with 316 career assists.
- Buggs led the Crusaders last year with 103 assists, ranking tenth in the @HorizonLeague.
- Buggs also ranked among the top-10 of #HLMBB players in ast/turnover ratio (1.4, 7th) and steals/gm (1.2, 10th).
- Buggs hit buzzer-beating coast-to-coast layup, giving Crusaders the win at @detroittitans Jan. 6, a play which was nominated for #SCTop10.

Matt Kenney
- Kenney scored all 16 of his points in the win over Northern Illinois in the second half.
- Kenney was a perfect 6-for-6 from the floor (3-for-3 from 3-point range) over a span of 9:31 against the Huskies.
- Kenney currently is ranked 18th in @ValpoBasketball history with 235 career assists.
- Kenney averaged 7.3 points and 4.5 rebounds per game as a junior for the Crusaders in 2011-12.
- Kenney came off the bench for his final 19 games of the season, but still finished second on the team with 27.8 minutes/gm.

Will Bogan
- Bogan hit a pair of 3-pointers in the Crusaders’ season-opening win over Georgia Southern.
- Bogan started 32 games in his first season with @ValpoBasketball in 2011-12, averaging 7.2 points per game.
- Bogan ranked second among Crusaders with 61 3-pointers and hit from downtown at a 40.9% clip.
- Bogan’s 3-point percentage ranked seventh in the Horizon League and is tied for ninth-best in a single season in @ValpoBasketball history.
- Bogan was named @ValpoAthletics male newcomer of the year by Valpo’s Student-Athlete Advisory Committee.
- Bogan made a career-high seven 3-pointers and scored 24 points in the Crusaders’ win at Detroit Jan. 6.

Ben Boggs
- Boggs connected on back-to-back 3-pointers to give Valpo a double-digit lead for good in its win over Northern Illinois.
- Boggs scored 7 points and led the Crusaderswith seven rebounds in the season-opening win over Georgia Southern.
- Boggs became eligible after the end of the first semester last year for @ValpoBasketball and appeared in 24 games, starting 20.
- Boggs averaged 4.5 points and 3.2 rebounds per game for the Crusaders, who were 14-6 in his starts.
- Boggs shot better than 80% from the free throw line in his first season with Valpo, second-best on the team.

Vashil Fernandez
- Fernandez recorded a team-high four blocked shots in Tuesday morning’s win over Northern Illinois.
- Fernandez debuted with a pair of dunks in the regular season opening win over Georgia Southern.
- Fernandez is eligible to play for @ValpoBasketball this season after sitting out the 2011-12 season and has 3 years of eligibility left.
- Fernandez made his senior international debut this past summer for Jamaica (@goteamja) at the FIBA Centrobasket tournament.
- Fernandez helped @goteamja to a 3rd place finish, its best ever at Centrobasket.
- Fernandez debuted in a win over the USVI and also played in the bronze-medal win over Panama.

Jordan Coleman
- Coleman made his Crusader debut against Georgia Southern, scoring 15 points and grabbing five rebounds off the bench.
- Coleman has knocked down all five of his 3-point attempts over the season’s first two games.
- Coleman is eligible to play for @ValpoBasketball immediately after transferring from Southwestern Illinois College.
- Coleman was an All-Conference selection for SWIC last season, finishing second on the team with 10.2 ppg.
- Coleman started his collegiate career as a freshman at @HawaiiAthletics.

Alex Rossi
- Rossi remained perfect from the floor as a Crusader, scoring five points on two shots in Tuesday’s win over Northern Illinois.
- Rossi debuted with 11 minutes of play in the season opener against Georgia Southern, hitting all three of his 3-point attempts for 9 points.
- Rossi handed out six assists without committing a turnover in the first exhibition win for Valpo over St. Joe’s.
- Rossi is eligible to play for @ValpoBasketball immediately after spending his first two years at @calmensbball.
- Rossi has three seasons of eligibility remaining with the Crusaders.